You are given an array of n+2 elements. All elements of the array are in range 1 to n. All elements occur once except two numbers, which occur twice. Your task is to find the two repeating numbers.

How can I improve it? Currently, it shows time limit exceeded on hackerrank.

You aren’t using either of these facts in your solution.

For the second, you could break out of the loop after printing the second number. This, by itself, might speed up the code enough to avoid the time limit.

But the true speed up comes from the first fact.

You can initialize a count array of n zeros. Each time you see a number, increment the count at that index. If you increase the count to 2, emit the number.

This avoids the l.count(i) function needing to loop through every element of the array. Done n times, this becomes an O(n²) operation. Maintaining a count array is O(n).

Note: due to 1-based numbers in challenge & 0-based lists in python, you’ll want to use a count array of n+1 zeros.

This line can take up a lot of time, and a lot of memory. Consider n=10000. The input will be split into a list of 10002 strings. Each of those strings is then converted to an integer, and stored in another list. Then the processing of the real algorithm begins.

We can use re.finditer(r"\d+", line) to split the input line into strings, with an important difference. The value returned is a "generator"; it only does enough work to return the first value, and then stops until the next value is requested. We can take each returned string, and convert it to an integer ... when requested.

Again, this is a generator expression. It has done no work as of yet. The first matching characters have not been found.

We can create a find_repeats(n, numbers) function that takes in a list of numbers, and returns a generator for any repeated numbers it finds.

The function doesn't care if we pass it a list of numbers, or an iterable object, or a generator. It will fetch number, one at a time, increment a count, and if it finds the count increase to 2, it will pause the function and return the number. If we've given the function a generator as input, we now have 2 chained, paused generators.

Since we are only looking for 2 duplicate pairs, lets link one more generator into our chain:

Again, we still haven't done any work. The first character of line has not been examined. It won't be until we asked for any values from the repeats generator expression. Let's asked for them all.

It will search the entire list from the start.

All elements of the array are in range 1 to n

This has the disadvantage of continuing to loop after the numbers are found, to avoid this you could add the elements to another array and return when the length of the array is 2.

It will not make the most "beautiful" code, but it will be faster than @Peilonrayz's answer for anything but worst case, since that requires to loop through the entire array. 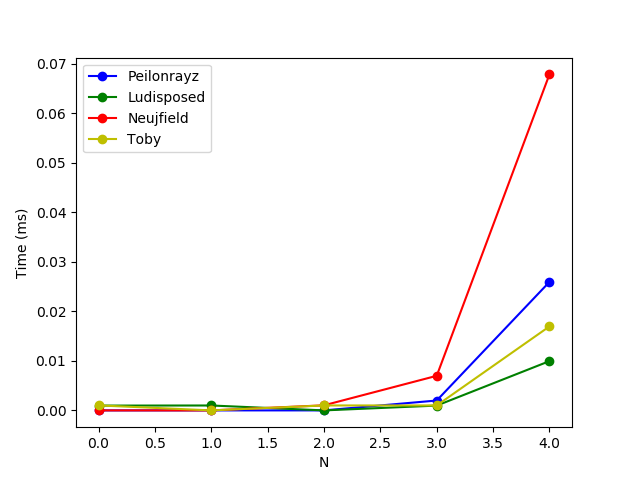 l.count(i) will look at every element in l, so it is O(n). We're doing this for each element we see, making the entire loop O(n²).

A more efficient solution will use extra storage to reduce that complexity. I recommend storing each x into a set. If it's already in the set, then it's a duplicate, so print it, else add it to the set and print nothing.

You should make a function. First get the input like you are doing, but then call the function and display the output. This is good practice to get into, as then each part of your program is doing one thing.

After this you can just use collections.Counter to get the most_common:

You can also make your input more Pythonic by:

So you can just scan the whole array, summing values and their squares, then solve a quadratic equation to obtain \$x\$ and then \$y\$.

Using CiaPan's answer, combined with some numpy, we can design quite an efficient solution. It does have some overhead which makes it slower for small lists, but for lists with more than 100 elements it is about as fast as Ludisposed's answer, and for larger arrays it is blazingly fast:

To ensure that both functions are timed properly, I give the same string to each of them, which is read from input(). The test file looks like this:

Note that I used the worst case array for testing, with the repeating elements on the very end. Here are the results from my machine:

Here we can clearly see the overhead of using numpy, but that the improvement is significant for large arrays. It should also be noted that this method fails with an integer overflow for arrays larger than \$ \sim 10^7\$. This can be rectified using dtype=object when creating the numpy array, but then the speedup is significantly reduced.

It should also be noted that this solution is also faster for the best case, even if the difference is slightly smaller:

Use collections.Counter if you can, it's the right way to go. It's linear time to construct and effectively linear time to find the 2 elements which apear twice

Your approach: Count iterates throuh the whole array for every element. That mean n^2 times. Better solution: Do not compare numbers that were already compared. You should compare a number only with numbers infront of it.

10
Optimization on Sieve of Eratosthenes using vector<bool>
4
Segmented Sieve of Eratosthenes in Scala
4
HackerRank, Sherlock and Array
1
Play With Numbers Programming Challenge (mean value of subarrays)
6
Binary searching the turning point of a function
7
Prime number segmented sieve
6
Immediate Smaller Element Time Limit Exceeded
4
Find positive integer with a minimum number of binary 1's such that its bitwise AND with all array elements is not 0