I'm fairly new to mvc and almost finished my auth class I wanted to check that I'm using it all correctly any feedback would be welcome. I used the PIP framework to get started http://gilbitron.github.com/PIP/

From an MVC perspective, your controllers are doing far too much. Anything that's related processing on domain concepts (users, logins, products, etc) belongs in the model.

The entire point of MVC is Separation of Concerns so that each component is reusable/replaceable.

To test Separation of Concerns there are a few questions you can ask:

Are any of the components tightly coupled to the others?

In this case, both your models and views are very tightly coupled to your controllers. It's impossible for you to use a different view or model with that controller because the logic that chooses which view to use and which model to use exists within the controller itself. SoC would suggest separating these responsibilities.

If I replace a component will that involve repeating code?

If replacing a component requires rewriting lines of code this is a good indicator of poor Separation of Concerns. In your example, it's impossible to substitute the controller without repeating a lot of code. This limits flexibility and adds extra work. If you then update your view (which should be reusable) you then need to update every single controller that uses the view.

Controllers are not mediators between models and views. They take user input, update the model in some manner then the view requests relevant data from the model. See my answer here: Small MVC for PHP for a discussion about a very similar implementation.

For your implementation specifically logic in the form of "Display this if the user is logged in else display this" is by definition display logic. As such, it belongs in the view and not the controller.

The controller should not be telling the view to render. In fact, in a web MVC implementation, the controller doesn't even need to know of the view's existence (and in the implementations that do it's for a very specific reason). See the wikipedia diagram on MVC: 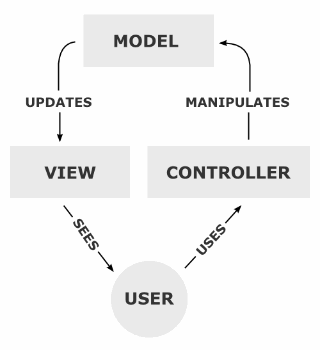 Which states: "A view requests from the model the information that it needs to generate an output representation."

Not the answer you're looking for? Browse other questions tagged php mvc or ask your own question.