Detecting a certain amount of violet in an image - follow-up

I'm trying to write a program to detect the colour violet in an image.

As discussed in my previous Post @Johnbot suggested that I try using HSL / HSV to determine if the pixel is some shade of violet.

Here are two of the images I'm working with. 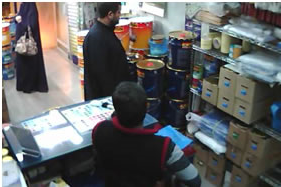 The code above is working so to speak, however is there something I could be doing to improve it for reliability and performance?

I did see a post about Bitmap locking however because its only going to be scanning a image every hour or so for any violet pixels, it didn't implement it, should i still do it?

Is the indentation like that in the original, or did it get corrupted by the tab-to-space conversion of StackExchange?

What's going on with the task? I don't know much about async event handlers, but as far as general async/await usage you only need one of Task.WaitAll(task) or await task.

What stops me from mashing the button and spinning off loads of tasks? Normally you would want to prevent a second click by opening a modal dialog (denying access to the button) or disabling the button, and then using ContinueWith to undo the block in the GUI thread when the task finishes.

If the image is already a bitmap, this is unnecessary and slow. It's probably worth having two cases and factoring out the code which works with Bitmap to a separate method:

That's an odd choice for counters. Why not use an integer type and coerce to double when dividing?

This is slow. A loop over GetPixel is always slow, and it's worse when the outer loop is over x because you lose cache locality. If you care about speed, use LockBits and switch the loops.

GetHue() returns a float. == comparisons on non-integer numeric types are generally inadvisable. You should almost certainly test whether selectedPixel.GetHue() is within a small distance of violet.GetHue(). How wide a range is a parameter which you may need to tune to get the results you expect.

??! Why? And if the specs require you to round to an exact number of decimal places and that's non-negotiable, why use double instead of decimal?

Under what circumstances can this catch anything? The only one I can see is if total == 0, in which case the error message should really be that the image was empty.

This is unncessary: it's already in a using statement.

The hardest part is figuring out what violet is. The math gets complex in a hurry and it can be hard to come up with a right answer.

As you know you can't just compare the distance between two colors because red is the same distance from blue as blue is from green, etc. As a completely abstract example just look at the standard basis vectors (*255) in ℝ³. 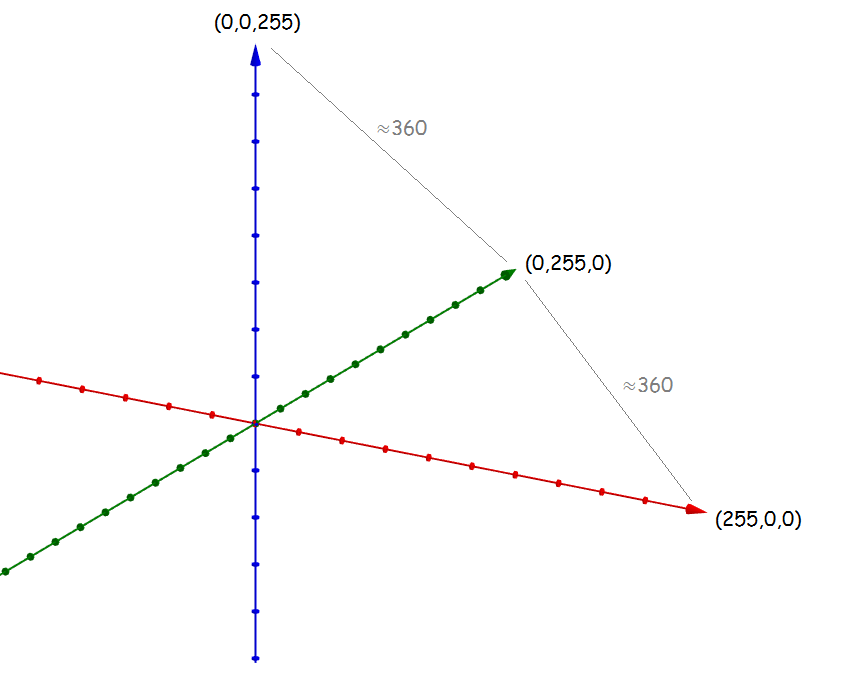 So if you are comparing like this there will be this fine line where on one side you have violet and on the other side, not violet. I know you're using HSL but I suspect you're having a similar problem and all the tweaking in the world won't help. Trying to work out the math yourself is a losing battle too. The good news is this amazingly awesome and nice website has done the work for us http://www.easyrgb.com/en/math.php.

I used it on my color picker which you might find useful as it finds the closest named color and already has some working code.

Not the answer you're looking for? Browse other questions tagged c# image or ask your own question.

8
Detecting a certain amount of violet in an image