Express a number as sum of 2 primes

Problem: Given an even number (greater than 2), return two prime numbers whose sum will be equal to given number.

Note 2: If there are more than one solutions possible, return the lexicographically smaller solution.

This solution becomes slower for higher order numbers. How can I optimise this code?

python performance primes
Share
Improve this question
edited May 12, 2018 at 19:58

Using the Sieve of Eratosthenes seems like a reasonable way to generate a large number of primes.

One thing that you could do is directly return your bitset representation of the primes, rather than copying it to a condensed list. This would save a bit of time in the short term, and be helpful for the next step.

First, doing something twice is slower than doing it once! Since list_prime(A) is repeated in both lines, it will have to re-run the Sieve of Eratosthenes: even though you know that the list of prime numbers isn't going to change, Python doesn't! Even worse, because the second line is in a loop, you're running list_prime again for every value of i. So you can speed it up a bit by storing that list in a variable before you get to the loops.

Second, when you have nested loops like this, you make your algorithm quadratic in the size of list_prime(A). The issue is that you're doing the imprecise test for j before the precise test, which is normally the slow way around. That is, you're considering all the values of j which meet the rule "j is a prime number" and then testing whether "j + i == A". Instead consider all the values of j for which "j + i == A" first. There is exactly one of those for each i, which is found by simple subtraction. Then check whether that j is in your list of prime numbers. If so, you have a match. If not, you can immediately check the next i.

(The reason that I suggested returning the bitset representation of the list of primes is that it makes it much faster to check whether a specific number is prime.)

It is good to consider the tie-breaking rules for problems like this, and listing candidates first and checking which wins afterwards is a valid way to do so.

However, it is worth thinking about the order of your algorithm before implementing the tie-breaking check. If, as is the case here, the first satisfying value is guaranteed to be the one that wins the tie break because it has the smallest i value, you might as well just return the first one you get to.

If the end result of these two lines is that bool_a[j] must be False, just set it to false. if statements are surprisingly slow on modern CPUs.

Whenever you find yourself appending something to a list one element at a time, consider whether you can rewrite it using list comprehensions. For example something like the following:

(However, as above, my actual recommendation is that you completely remove that step and directly return bool_a)

Restating and condensing what @Josiah already said in their answer:

With these two changes your code would become:

This outperforms your original code by a huge margin: 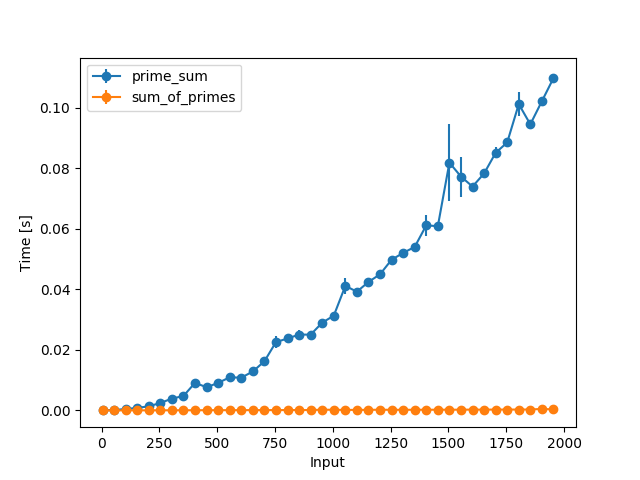 Not the answer you're looking for? Browse other questions tagged python performance primes or ask your own question.