In this scenario, I have VBA code and use Late binding and no error handling for simplification. Also, my question is not explicitly related to Visio, it could be any else application. Let's just accept that the steps are required and my question really belongs naming and architecture.

Goal of the code

Load a drawing in Microsoft Visio using VBA and show the proper window to the user.

Although the VisioInterface does interface with Visio, it is not an Interface. It you add more functionality to the class I would name it VisioDocument

I agree with @Raystafarian when it comes to the naming of your procedures. Everything in this class is related to Visio. Adding Visio to the names of all the procedures is just clutter.

I agree with @Raystafarian when it comes to the naming of visWSMaximized and visOpenRW. These values may have constant values but they are actually Enumerations. Consider adding the Enumerations to the head of the class. Make them Public if you are going to use them in a parameter of Public Procedure, otherwise make them Private.

The class is somewhat clunky. It needs some Public Fields to bring it together. Document and maybe even Windows field will make all the procedure gel better. For example, you have both Load and Open procedure but Activate uses AppActivate to activate the Window instead of directly referencing it.

There is no clear starting point to using the class. Consider writing some sort Initiate or Init procedure. I would replace LoadVisioDrawing with Init(Path as String).

You should consider using GetObject(PATH) to set a direct reference to the file if it already open. For example: Set Document = GetObject("C:\myVisioFile.vsd") will either set a reference the myVisioFile file or throw an error.

Don't Reinvent the Wheel - Model Your Code After Existing Patterns

Does Visio load a Document or does it Open a Document? It opens one of course. Anyone familiar with any of the Microsoft Application Models knows this. If they see OpenDocument they instantly know what the procedure is expected to do. On the other hand when I seen LoadVisioDrawing, I had to discern the meaning of both "Load" and "Drawing". Because I have never used Visio and don't have access to it, I had to research VSD to determine that it was a Visio Document format. It might be advantageous use the more generic name Document.

Modeling your code after existing patterns will make your code more understandable to others and easier to re-assimilate if you have to modify it down the road. Familiarity makes understanding and learning far easier tasks.

What follows is rough draft of how I would write the class. I could not test it because I don't have Visio installed but I am confident that it would not be hard to get it up and running.

Looks like a round-about way to creating an instance of Visio. It's not really a boolean at all. If you checked if it existed and returned a boolean to decide whether you need to create one, then it would be boolean.

Moreover, I don't see any way that the instance of Visio could exist at that point, it's the first thing you do and you've not set anything to the object.

That's really not too bad of a function and it eliminates 3 others. Your call on the error checking.

Let's look at what procedures we have left (ignore that it's in excel, that shouldn't matter) created in RubberDuck-VBA 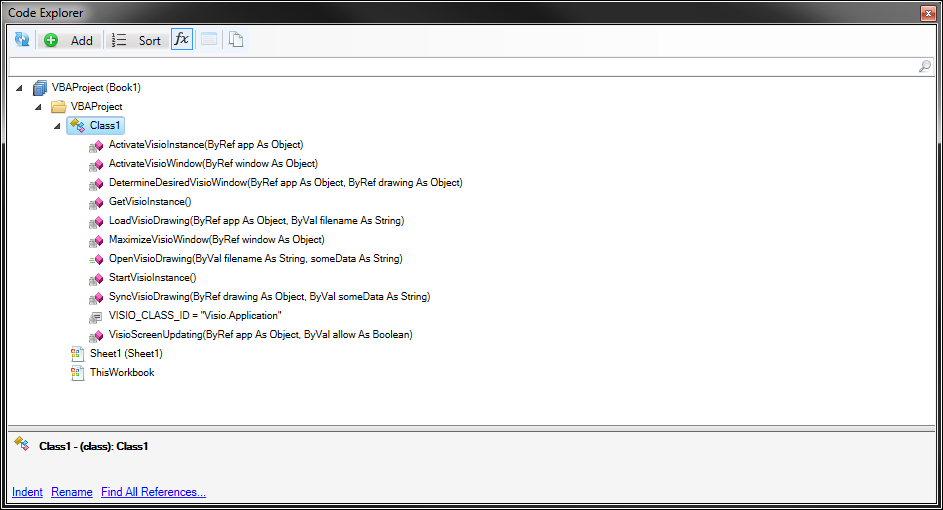 Wait! There's no .Initialize() function. Maybe you can do all the creation and getting during initialization?

Now, I'll admit I'm not a Visio expert, but isn't this being run in Visio? Or, if it isn't, this Class has Visio in its name.

I think it's pretty clear we're dealing with Visio, don't you? That's just muddying the naming waters and really doesn't help to understand what is going on with each function. Why not just drop it?

Hm, that's better. I don't like that ScreenUpdating function, there's already Application.ScreenUpdating. Seems maybe that could just be a boolean property to Let and Get? I only actually see that property change once and then back.

Here you're using the AppActivate statement, but you've wrapped it in a ActivateInstance method. And you're using a caption that is a property of Window (the visio object, not your variable). But I don't see where you're using that property, I don't know what the caption will be. It seems like your ActivateInstance procedure is less efficient and/or clear than if you just used the AppActivate statement in the first place. If you're going to wrap it in something, make use of that! You aren't even taking a caption argument!

You're passing an application object into a procedure to set its title, which you're also passing to the procedure? so it's SetDrawingTitle? Using that procedure isn't needed. If it is, name it better, take a different argument, maybe turn it into a function to get the title, or even better - make it a property of the Class.

That's a lot of things, and a lot of those things are broken out to other procedures already (which is great!). I'd say the sub is managing all of the visio procedures, or being the interface to visio (that's the class name right?).

Your first constant is UPPER_SNAKEY_CASE but the other two aren't. They aren't given Types either, so they are variants. What should they be? Strings I must assume. So make them strings.

Also, what are those values? &H20 and &H40000000 - hex notations? Of what? ASCII characters? Those constants names should at least tell me what they should be! Otherwise

I have no idea what that should do. I don't know offhand what .OpenEx parameters are (because I'm no Visio expert). Let's find out.

What? Those are flags and it is an integer? And visOpenRW already is the constant for it. Okay, now a lot more of that makes sense, but if there's already a constant, just use it as the flag, no need to tell me there's a constant, apparently an integer, that goes as an argument (flag) into an expression. I'd know more just by

At least I won't chase my tail around for your constant's hex notation only to find out the flag visOpenRW is a built-in constant for that expression.

The variable app is what I would call vague. I see you used visioApp once and most of your functions said "visio" - why not just use visioApp or visioInstance or something similar as your variable name? That will make sure I know we're in Visio.

You've also named a variable the same name as a Visio Object - window. That can get confusing, but it's your call

All your functions are returning something and all of your subs are doing something, great! Your variable naming is consistent, but it's not all that descriptive.

I see a lot of ByRef in there, and several that are implicitly ByRef because they've not been designated ByVal. Why are you sending everything as a reference? You're sending Objects ByRef into Functions that return Objects.

I'm unclear as to why this class is existing. It doesn't seem you'll really need a factory for a bunch of Visio and I don't see any properties being stored in the class. I mean your class is essentially a Visio application object, if I'm reading this correctly (and I may not be).

I ran this from Access 2016 with a sample vxd and the Visio window never stopped blinking in the taskbar for a new instance of Visio. If it was already open, no blinking.

The blinking starts at

Itried moving ActivateVisioInstance to after LoadVisioDrawing but still, it blinks. I don't have a solution for that, I'm just being a negative nancy and pointing out problems :(

Stepping through the code though, still I don't understand how VisioInstanceExist can possibly be True without you calling, essentially AttachVisioInstance.

I was wrong with my example of a new version of that function. It should be

That's my fault, sorry. The point still remains though.

OpenVisioDrawing should be named better, but as far as what to name it, I can only give suggestions. VisioHandler, VisioInterfacing, VisioController, something more broad.

It works exactly the same as if it's in a class. Essentially your app is your object, not your class. And an instance of Visio is an object. What I mean is, why is this a class if you aren't using any special properties? I'm not saying it shouldn't be a class, I'm saying think about why it's a class and what it being a class can do for you differently than if you just stick it in a module.

Let's say in your class you put in

Now you have something you can use outside of the class.

So instead of just sending an entire thing into the class to do everything, you can use those methods in the standard module.

Not the answer you're looking for? Browse other questions tagged object-oriented vba or ask your own question.