I decided to make my own dungeon generator, after reading a bit about it. This is my first effort. I can only say that it works, but I believe there's room for some improvement, because I believe my self-taught coding skills are basic.

To use this code, call:

From the start, I realize I can improve the code:

By preventing backtracking, but backtracking sometimes makes some nice crevices here and there. Resolve this by making impossible to select the direct opposite of the previous direction? I want to figure out a way to improve that direction choosing part (currently I don't know how).

On purpose, I left the number of cells to generate out of the CreateDungeonRoom() method because I'm still deciding if I really want to make users insert the number of ground tiles as a specific number or a percentage, or enum. We will see.

Here is an example of a dungeon with 115 width, 32 height and 1500 ground tiles and the player starting position (it's the H somewhere) 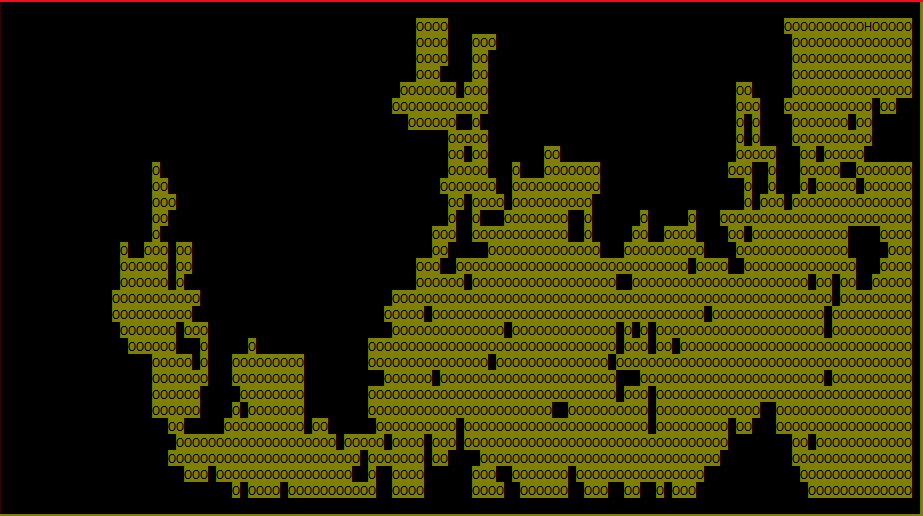 Place the following code outside of while loop if you don't really need it inside the loop.

DungeonGenerator, to me, would mean that it is a class that generates a Dungeon. But the way you use it, DungeonGenerator is itself, a Dungeon. I would drop the "Generator" part of the name, or refactor it so it is in-fact a dungeon generator.

Your DungeonGenerator has a few externally mutable properties that I don't see a reason for them to be mutable. It would be better if these weren't mutable:

Additionally, DungeonCells doesn't really need to be a property at all, so just make it a private field.

You documented the CreateDungeonScenery method, but nothing else that is public. You should be "all-in" with documentation on methods, and make it descriptive (don't just re-word the method name). If the method has side-effects, mention them in the <remarks></remarks> section.

I don't see any reason why you would want to create a new DungeonGenerator and not run CreateDungeonRoom, so why not make that into the constructor?

Additionally the constructor can call the CreateDungeonScenery method as well. So now instead of the original way, you can consolidate code:

The LogDungeon method name is confusing, because the word "Log" to most developers means some kind of diagnostic routine that writes data to a file or console purely for debugging purposes. You are using it to take over the console (by clearing it) and output the text graphic of the dungeon to the console. I think a better name would be something like FlushToConsole or something like that.

However I think you shouldn't be having Console methods anywhere in this class, let the user decide what to do with it. If a class has a valid string representation, you should be overriding the ToString() method instead, so LogDungeon becomes ToString():

Now the user of your class can decide to do something else with it, such as write it to a file, send it over the network, print it on a webpage, etc. The user is no longer tied to the console.

Some general comments about how your code "reads":

First, let me say that I support the idea that the dungeon generator and the dungeon object should be different. The code to randomly create rooms has nothing to do with the code that decides whether a user has stepped on a trap, etc. So I like the idea of a separate class/object/function.

That said, this is a very awkward set of calls. It doesn't "scan" well (to use a term from literature). I suspect that all these fine details need to be wrapped up into a single factory function that a user can call:

Your cell type is an enumeration, which seems obvious but actually isn't very useful. The thing you mainly do with the cell type is display it, and sadly C# enums cannot have char as their underlying type. But you can work around that using an int and just assigning char values:

Just be careful about what size characters you use (16 bit only). If you have to use a full-out string, consider the solution in this answer.

I suggest this because your output code would benefit from having "concrete" values. (The rest of your code is happy with the CellType being an abstract enum.)

Note: As a rule of thumb, if you find yourself executing a switch on internal data it's a good indicator that you should consider a new type. Switching on external data might be a correct way to deal with user input. But switching on internal data frequently means "these things should be different objects, or different classes". In this case, the enum values are serving as proxies for objects that have their own output string representation.

It would be better, IMO, to simply emit the value, or a method of the value (as in the linked answer):

(but see below about that x, y thing!)

Direction is another enum that doesn't quite do what you need. Currently, you write code like this (code modified for size):

Instead of making Direction an enum, what if you make it a class? You can then have Direction.AtRandom() return what you want without having to cast it.

What's more, consider what you are doing: you immediately decode the direction into an X or a Y offset. You then either adjust the variable startX or startY.

Why are those two variables different? What is startX? What is startY? Aren't they part of a greater whole, called Position (or Location or Coords something)?

If you had a Position type, you could just have start instead of startX and startY. You might have to adjust start.X and start.Y, but probably not, because Direction should be a vector.

If Direction.North is a Vector defined as { δx = 0, δy = -1 } then you can define addition of a Position and a Vector in the obvious way (x+δx, y+δy) and then simplify your code:

Note: .Contains may be the wrong name, since there is that implicit rule about not modifying the outer edges. Maybe "CanBeRoom()"?

If you define an indexer for your Dungeon, you can use the Position directly instead of reaching in for the x and y values. This will cost some performance, but that likely doesn't matter during generation. Alternatively, you might just write a Dungeon.At(Position) method.

I saw one "implicit" rule in your code: the dungeon's outside walls are inviolable. I'd suggest that you make those rules explicit, and encode the operations you are currently implementing with just a paragraph or two of code:

This can be replaced by defining methods:

I'd suggest writing at least one position iterator for the Dungeon. Something like Dungeon.PositionsInViewOrder(), that would yield the cell positions in the right order for display.

(Note: if Cell objects knew their own Position, I'd suggest just writing a Cell iterator and skipping the Position. But as things are, this is the way to go.)

You could rewrite your LogDungeon function as a Dungeon method:

You might find that many dungeon creation tasks are made easier by defining Position iterators. For example, if you want to randomly generate rooms and hallways you could define Position.WithinRect(topLeft:Position, bottomRight:Position) and Position.AlongLine(from:Position, to:Position). (Be consistent on how you handle the end position: inclusive or exclusive!)