I've been doing a Udemy course called: "Statistics for Data Science" and I decided to solve one of the homework with Python to kill two birds with one rocket #elon.

The team of traders under your supervision earns profits which can be approximated with Laplace distribution. Profits (of any trade) have a mean of $95.70 and a std. dev. of $1,247. Your team makes about 100 trades every week.

As I just started to learn Python I would be happy for some hints and opinions.

You seem to know about str.format (since you use it), yet you are still doing string addition:

Just make it a single string:

You could also use the % formatting option for floats (described in the fifth table here), which automatically multiplies with 100 and adds the % sign. The number of digits after the decimal point work differently, though, compared to the g format:

You should also re-organize your code according to the following scheme:

That last part is there to protect your code from being executed if you want to import some part of this script from another script. At the moment if you want to do from laplace import Z, your whole code would run. With the if __name__ == '__main__' guard, it will only run when you execute this script.

You should add docstrings to your functions, describing what they do, what arguments they take and what they return. Have a look at PEP257 for the guidelines regarding docstrings.

And, in order to answer my own question from the comments:

Yes, it is justified to use the normal distribution here, since the Central Limit Theorem guarantees that the sum of random variables tends towards a normal distribution. The approximation is quite good for \$N = 100\$, as can be seen with the following small script: 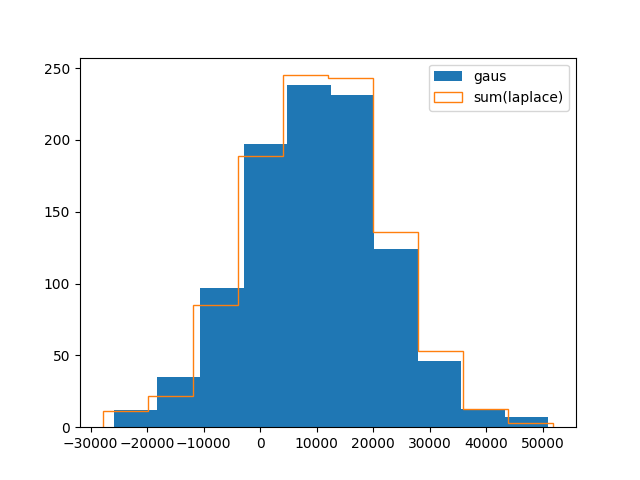 Not the answer you're looking for? Browse other questions tagged python python-3.x statistics matplotlib scipy or ask your own question.