Printing lines of "*" of various lengths

As a beginner, I tried a programming drill. The method gets an Enumerable that contains numbers specifying how many "*" to print on each line.

I have another version here:

What impact on the GC will creating so many strings have? Which way is more efficient, and how would you prefer to do it?

I don't consider myself an expert when it comes to the internals of .NET's garbage collector, but as far as I understand:

Use a single buffer

It seems (on my computer, at least) that the overhead of creating lots of strings way less important than the overhead of repeated calls to Console.Write(). However, we can pretty much get the best of both worlds by using a buffer of stars, and using the Console.WriteLine(char[] buffer, int index, int count) overload: create one big string (buffer) and just read as much as we need each time. 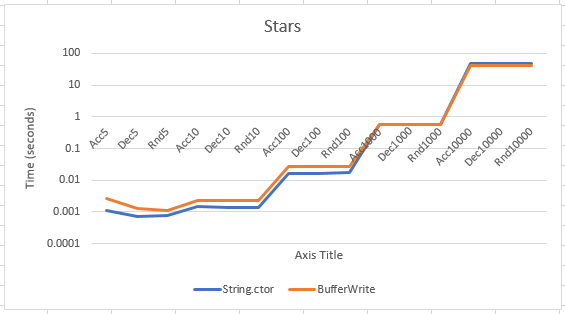 It shows what appears to be this 'buffered' method outperforming your first solution (with string.ctor(char, int) fix, as suggested by others) for longer/more strings.

It is interesting to see just how well string.ctor(char, int) performs. It is an externed function, which helps, but as the strings get longer, I would expect the buffering to pay off more and more.

The graph shouldn't be wholly convincing (if I could be bothered to leave it running for a while longer, we might see the buffered method really paying off for larger and more numbers. You should absolutely ignore the results for small n. Each data point is the total time taken for 100 repeats (shuffled every 10). I apologise for how terrible the plot styling is, I don't know how to use spread sheet software.

Though I don't doubt that buffering is the way to go for this toy problem, it should be noted that although Console.Write methods were 2 orders of magnitude slower (on my machine) than the stringy methods (they aren't plotted because I gave up waiting for them), this won't apply to other streams. Note: I ran the code under release, piping stdout to nul, which I'd have thought would minimise the overhead in Console.Write, but I don't really know

Again, this is how this thing ran on my computer, it could well be different for you, and you shouldn't attempt to make general inferences from these results (or any results on such a contrived problem).

Strings in .NET are "interned" which means every string you create is cached for the life of the application, so if you use the same string twice, you are using the same instance as before. So as far as garbage collection goes, I don't think it matters. Using a for loop is probably faster than Enumerable though.

Not the answer you're looking for? Browse other questions tagged c# beginner comparative-review ascii-art or ask your own question.