I have spent about more than a year in python, but I come from biology background. I should say I have got some understanding of for-loop and nested-for-loop to workout the solution to the problem I have had. But, I suppose that there are better and comprehensive way of solving problem.

Below is the code I wrote to solve the haplotype phase state between two haplotype blocks.

Here is a short snipped of my data:

In the given data I want to solve the phase state of haplotype for the sample ms02g. The suffix PI represents the phased block (i.e all data within that block is phased).

For sample ms02g C-T-A-G is phased (PI level 6), so is T-C-C-T. Similarly data within PI level 4 is also phased. But, since the haplotype is broken in two levels, we don't know which phase from level-6 goes with which phase of level-4. 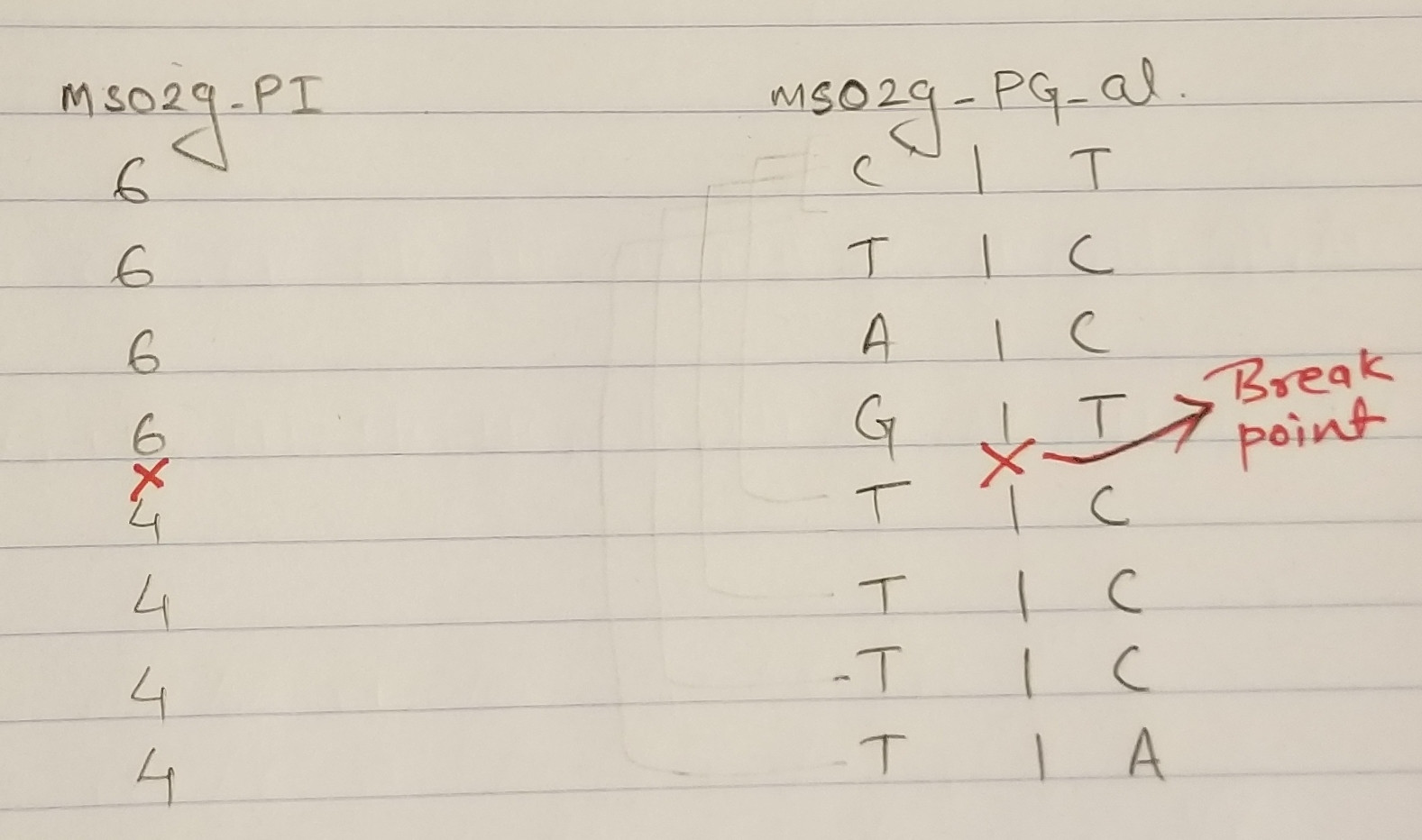 Since, all other samples are completely phased I can run a markov-chain transition probabilities to solve the phase state. To the human eye/mind you can clearly see and say that left part of ms02g (level 6, i.e C-T-A-G is more likely to go with right block of level 4 C-C-C-A).

So, there are 2 haplotype configurations: 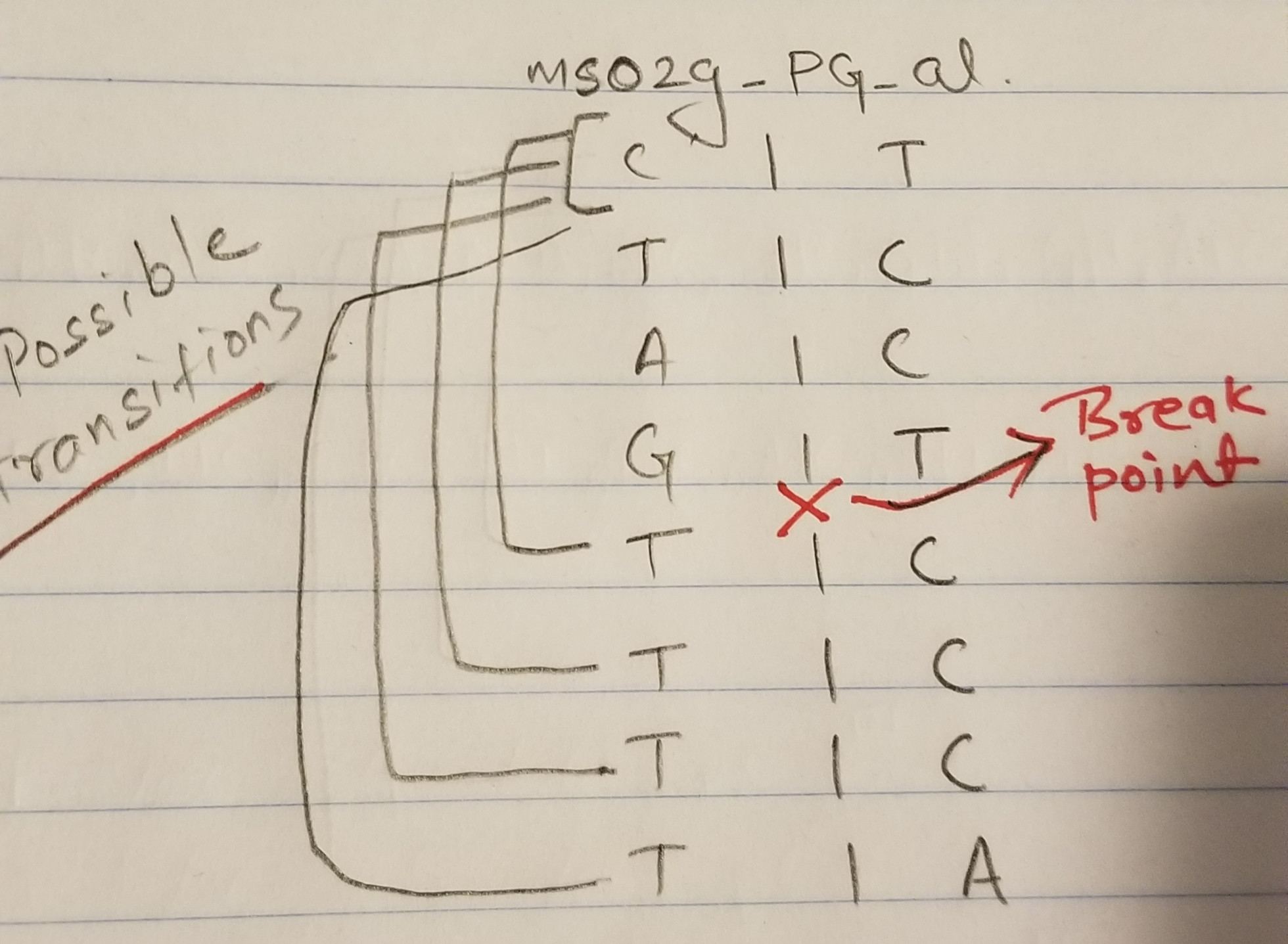 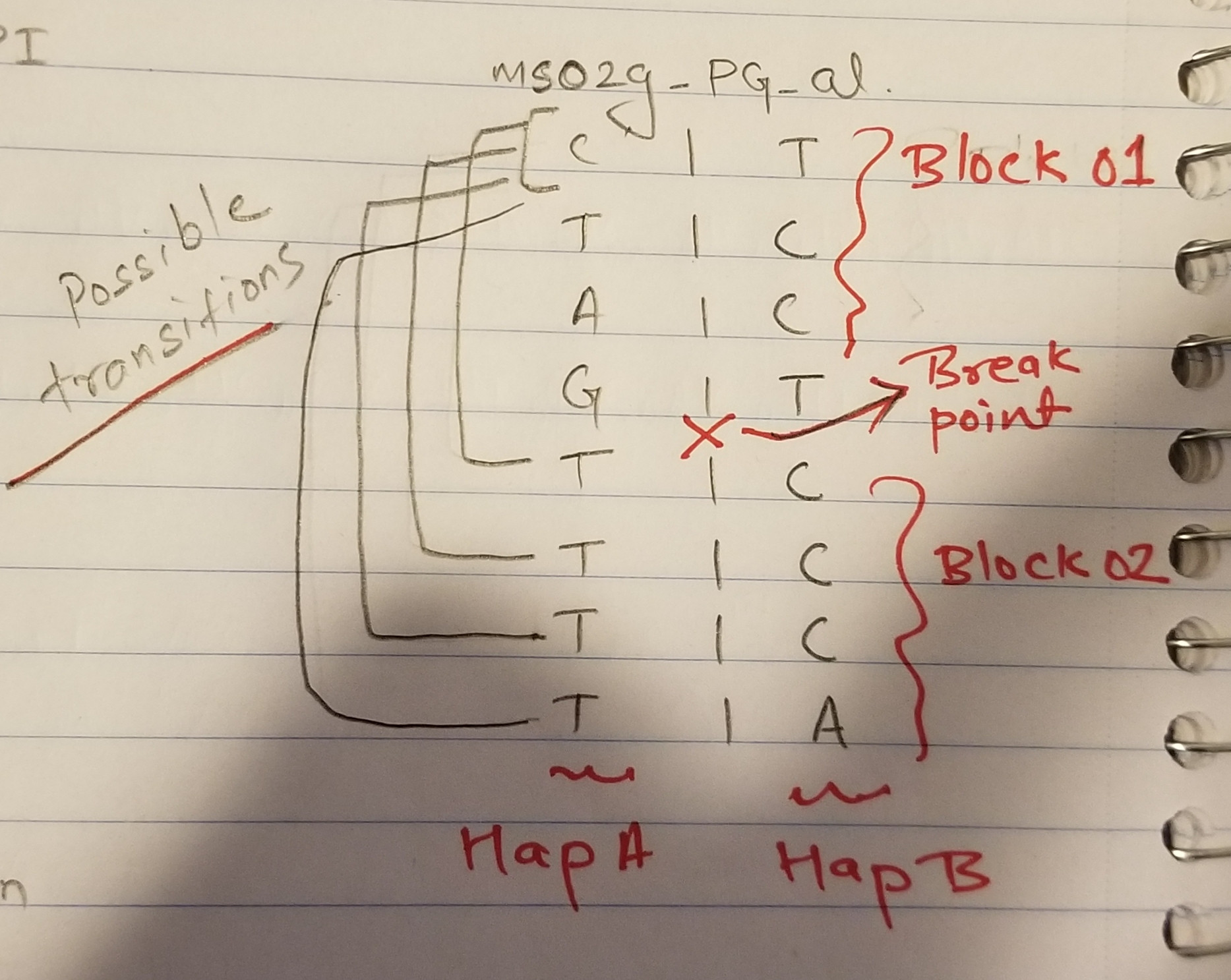 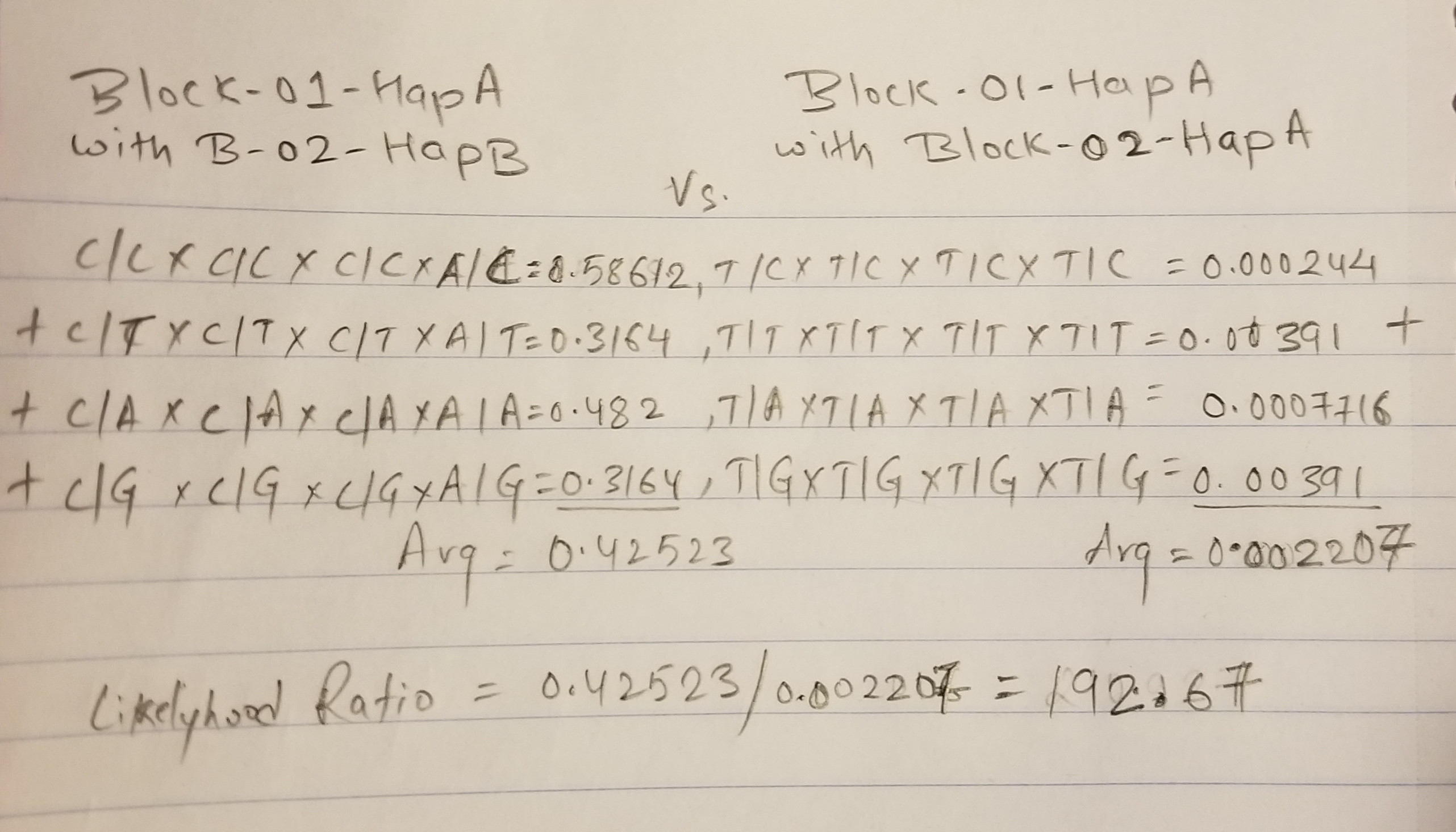 I have the following working code with python3: I think the transition probs can be mostly optimized using numpy, or using a markov-chain package. But, I was not able to work them out in the way I desired. Also, it took me sometime to get to what I wanted to do.

Any suggestions with explanation. Thanks.

Before we get to the interesting stuff, we should handle some stylistic niggles. Note that PEP 8 is a de-facto style for Python code. First, imports should be sorted

You only use collections for OrderedDict, so import that directly.

Names should be either snake_case, for functions and variables, or UpperCamelCase for classes. This means

Some notes I will get back to later:

But enough of this for now.

To be frank, this makes no sense.

Let's fix the easy issues and move it to neighbor the only place it's used so we can revisit it at a more appropriate time.

We then open with a file open

First of all, +1 for using with. However,

You then repeat this with

The file should be closed as soon as you are finished with it, and the comment should be reformatted.

I am not going to mention using strings as comments again, but you do need to fix this everywhere. Remember that this does not apply to docstrings, where you should follow PEP 257.

Inside the now-first block, we have an accumulate function

Let's quickly work on that docstring. First of all, note that it's in the wrong place and not in the right voice.

I do not believe there is any reason for these dictionaries to actually be ordered, so I would abandon that. I would also prefer short names to single letter variables.

which would be nicer as a comprehension

You finished off with

An experienced Python programmer would probably be very averse to those lines; deleting variables should be done very sparingly. But in this context it's actually good; you have global data and you're clearing the mess up after yourself. The reason experienced programmers don't do this very much is because they know to encapsulate logic like this instead. The end result looks something like

I don't entirely understand your docstrings, so I may have mangled them a little. The final with and assignment itself will eventually be moved into another function.

What;s with those semicolons? More importantly, these assigned values are never used since they always get assigned ahead of time, so they can only hide bugs. Remove them entirely!

but only use this way down on what is for me now line 146,

It is best to just move it there, though you should use a tuple instead because, being immutable, those can be built once and then reused.

Then you go straight to the loop,

Because all the shared variables have been removed, it is now obvious that each iteration is stateless except for the file being written into. This means we can move the entire contents of the loop into a function, though it is cleaner to keep the first if outside.

Obviously this needs a better name than some_function(f, k1, v1, k2, v2), and better documentation than just an ellipsis. I will leave that as a task for you to figure out.

Note that the hap_block variables are only ever used inside this snippet, and all take the form

for X and Y. So let's make that a function

Even better, produce a table.

But not that this is only ever used as

As a small nit, next you

which I would find nicer as two separate print statements.

This is not good; don't use dead variables as comments. There are other places you do this; fix them all.

Secondly, this once again implies you should be using some kind of higher-level container.

You then start a loop

Inside the first level you write

You clearly have some idea with introducing nucleotide_prob_dict, but you fail to capitalize on it since you never do anything with the type. Let's try another approach, using only the dictionary

We'll come to the run-on effects of doing this later. We enter the inner loop and get another encounter,

which we can rewrite

Again, we'll see the run-on effects later. We do, however, find issue colliding with the next value;

You haven't explained what makes these transition probabilities different, so the whole thing is really confusing. However, you only use this later on with sub_probs and co., so just move it down there:

By this point you no longer want transition_probs, so you can just replace the name. Since everything is a data structure here, you can just implement a basic iteration.

The following code is now

which can also be transformed

Let us reverse a bit, to the for x, y in sample_list. We have

You have another redundant assignment, with a redundant comment, to remove.

First, the hap_config variable seems rather strange to me. Secondly, more importantly, you write x + '_' + y when it would be nicer to deal in tuples to start with. Overall this whole thing can be compressed to

and similar for the second run, though you should hoist the zip and use an else instead of an inverted if.

Scrolling down a bit, because I've lost track of any semblance of order, we can replace

I'm going to leave this here for now, since I only have so much time to cover changes, though you can continue a lot of these cleanups in the same way. Other major untouched issues are around clearer high-level explanations, building the program out of separated functions, removing hardcoded paths, and moving to a matrix representation rather than a dictionary approach.

Not the answer you're looking for? Browse other questions tagged python performance beginner numpy markov-chain or ask your own question.

17
Duplicate like a weapon, arrays like heaven
6
FizzBuzz for CodeEval
2
Counting nonexisting records with foreign key
8
Snakes and Letters
2
Counting the minimum number of blocks to remove to form a triangular temple
2
Configuration parsing and verification utility for bioinformatics tools
1
Optimizing performance of string comparison function (particularly interested in redundancies)