I have written two functions, one actual and one helper, to convert camelCase strings into snake_case strings (I call it joint-lower case). Any ideas for improvement are welcome.

I think regex would be the easiest to do this with. You just need to find each word in the string.

And so you can use:

You then want to apply the following to these:

A couple of things:

Putting all that together, we get the following:

Finally, some thoughts on avoiding the try block that bothers me personally.

We can leverage from the short-circuiting used in Python's logical expressions and (re-)write the following:

Note the i != len(my_str)-1 on the left side of the and. If this returns False the my_str[i+1] is not evaluated at all and thus cannot raise the IndexError.

First a note on naming: cc2jl is a very cryptic name. Give the public function a clearer name, like to_snake_case or something similar (note that the function does not do anything to a string that already is in snake_case).

While I quite like the fact that you used a generator approach, which guarantees that you make only on pass over the string, this seems like the perfect place for a regular expression. Some quick googling finds this rather simple function:

This is definitely shorter, even though that cryptic regex is not very easy to understand. But following your code, while written quite straightforward, is also not easy, especially with the deep nesting.

To get a bit more performance out of this, you should pre-compile the regexes:

Performance wise, all algorithms are similar: 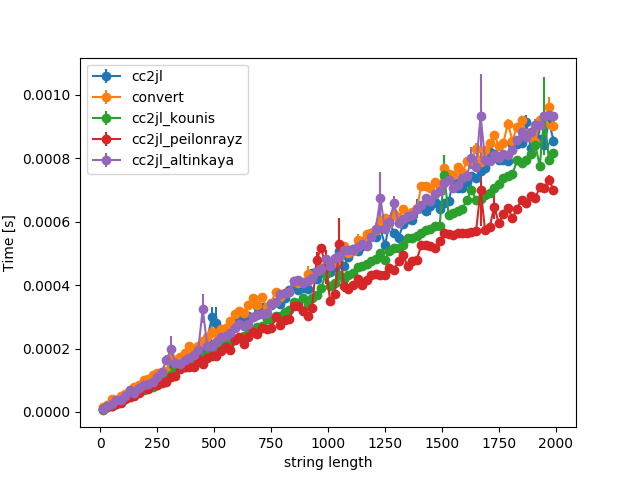 Not quite surprising, they all give a linear behavior (as a function of string length).

My regex version needs to make two passes over the string and is therefore consistently slower. The function written by @Ev.Kounis in his answer outperforms both of ours, but the regex approach by @Peilonrayz is even faster, because it manages to do only one pass, but with a regex.

Note that all functions are very fast, so as long as you need this less than a few thousand times per second, any is fine.

The test strings were generated with this code:

In Python 3 it could have been:

It can be a bit shorter:

Not the answer you're looking for? Browse other questions tagged python strings python-3.x or ask your own question.

11
Transform snake_case to camelCase
1
CamelCase word count
4
Joining strings to form a URL
6
Function to return subword of a camelcase string
5
Functions to count vowels and consonants in strings
15
Convert camelCase and PascalCase to Title Case
3
Can this code, to convert string to integer, be made more compact?
11
Path finding solution for a maze whose state changes during the solve
4
Convert Integer to Binary String