This is actually my first shell script and just by looking at it I know this can look better. I use Elixir and Phoenix for most of my projects and I started using Zurb Foundation 6, changing from Bootstrap to Foundation is kinda tiresome sometimes so I decided to make a script to automate this process.

This is the script

But I'm not sure what I can change or HOW can I change it.

I'm not a shell expert, but I think I could help a bit. The most relevant tips I could give are:

Unquoted expansions are the most common source of bugs and security issues in shell scripts. There are cases where it's safe to leave expansions unquoted (as in foo=$bar) but, unless extremely necessary, it's preferable to double-quote every expansion you have.

The $(command) syntax is POSIX-compliant and it can be easily nested.

You mix different styles in your code.

4. Be careful with eval

Avoid it if you are not completely sure of what you are doing.

I suppose you use the rest variable to save your remainder arguments. The problem is that you are saving them as a single string and you are relying on word splitting to handle it.

If your shell support arrays, this would be a safer and cleaner solution:

If available, prefer them over external commands.

First, I recommend you to read the Utility Conventions chapter of the POSIX specification. It's useful to understand how argument syntax works in standard utilities and serves as a guide to the rules you should follow when you create some program.

The goal is to make sure your script follows the program [options] [operands] syntax. I mean, instead of rely on the position of arguments to assign variables (as in name=${1}), your script should parse --name foo (or something similar) to change the value of the name variable.

There are basically two approaches:

Greg's and Bash Hackers' (1, 2) wikis have tutorials for both approaches, so check them out.

I've also written an example script to show how to do manual parsing and colored output: 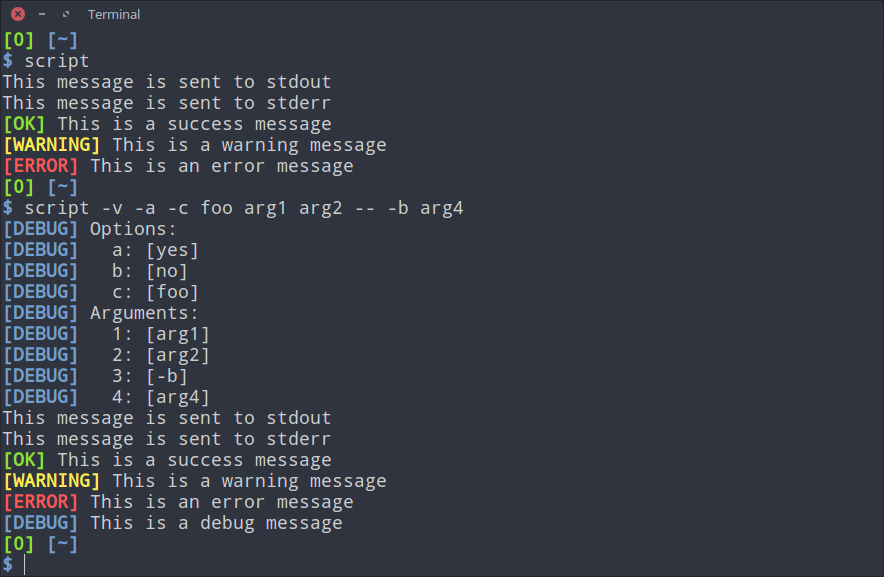 Not the answer you're looking for? Browse other questions tagged bash shell sh or ask your own question.