Here is a simple implementation of the Discrete Fourier Transform:

Here is a script file applying the above and comparing it to the built-in function fft(X, n): 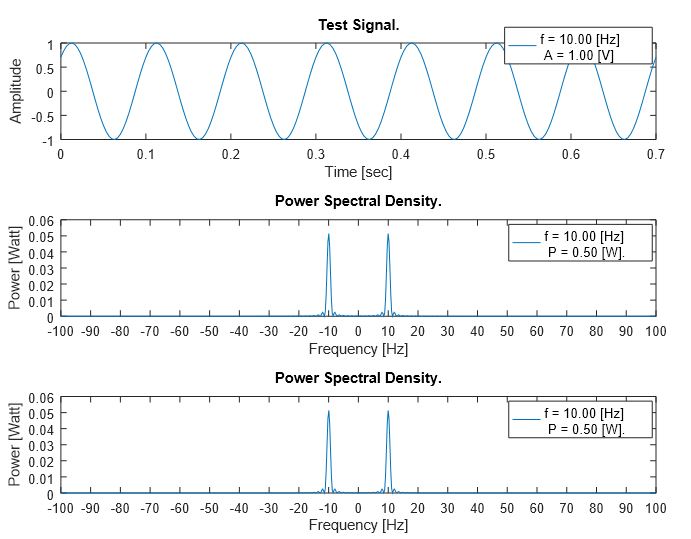 How can I estimate the validity of the values produced by the custom implementation? Is this a reasonable estimate?

When you have the start, endpoint and the number of steps you want in a vector then linspace is better than colon:

It's cleaner, since you don't have to calculate the length of each step.

j looks like a variable, especially since you use i as a variable later on. The recommended way to denote the imaginary unit is 1i or 1j. That way it can't be confused with a variable, and you don't risk overwriting it.

You don't need .* when multiplying by scalars. It's only needed between matrices or vectors. If you only use it between matrices then it's easy to see which variables are vectors/matrices, and which are just scalars. It's now hard to tell if point_index, freq_index and/or total_freqs are scalars or matrices.

There's only one vector in that statement (point_index), so no dots are needed.

The for loop can be vectorized, which is the MATLAB way to do something like that. I don't have MATLAB at hand, so I can't do it for you, unfortunately. If you have a version newer than R2015B, then you can do implicit matrix expansion by adding two vectors of different orientation:

You can do this with point_index and freq_index, then do matrix multiplication to get the final ft.

Don't use error as a variable name. It's a useful function that you can use to, well, throw errors.

You don't need a space after \n in a string, unless you actually want a space in front of the first letter in the next line:

Not the answer you're looking for? Browse other questions tagged matlab numerical-methods signal-processing octave or ask your own question.