Found this challenge on CodeFights and would love a review of my style.

An amazon (also known as a queen+knight compound) is an imaginary chess piece that can move like a queen or a knight (or, equivalently, like a rook, bishop, or knight). The diagram below shows all squares which the amazon attacks from e4 (circles represent knight-like moves while crosses correspond to queen-like moves). 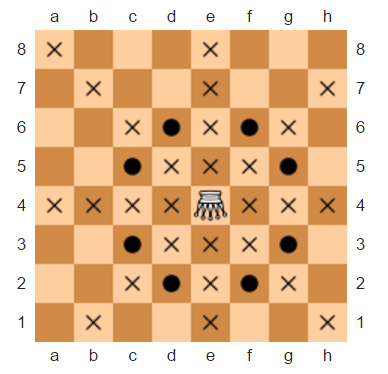 Recently you've come across a diagram with only three pieces left on the board: a white amazon, white king and black king. It's black's move. You don't have time to determine whether the game is over or not, but you'd like to figure it out in your head. Unfortunately, the diagram is smudged and you can't see the position of the black's king, so it looks like you'll have to check them all.

Given the positions of white pieces on a standard chessboard, determine the number of possible black king's positions such that:

Note that two kings cannot be placed on two adjacent squares (including two diagonally adjacent ones). 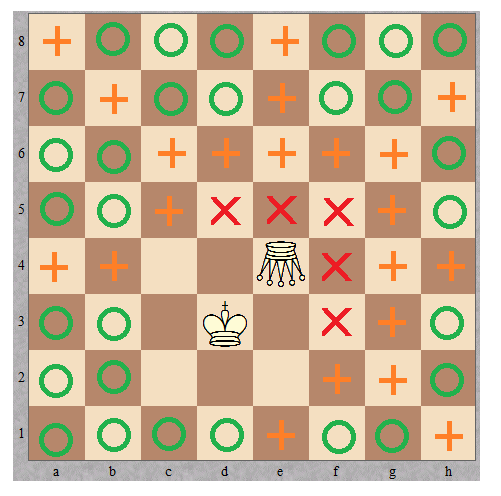 Clunky methods can be the result of awkward setups. In your case, yes, you should have divided the problem up in smaller chunks. Your algorithm is so tightly bound to the current problem that

Your problem can be broken down as:

1. Can be further broken down to generating the attacking squares for each white piece individually and taking their union at the end. For example, generating the squares a king can move into contributes to all 3 steps above. For step 2 it is by figuring out which square placements are not valid for the black king, since he can't start at any squares the white king can move into.

In terms of movements, there are two types of pieces we are concerned with. Ray-like pieces, i.e., bishops and rooks, can move outwards in various directions, but their movement can be blocked if another piece is in their path. And we also have occupying pieces, i.e., king and knight, which can influence certain squares regardless of any piece arrangement.

To generate the amazon moves, I would write rules for a bishop, rook and knight individually. Then, the first two would have to be filtered depending on whether the white king is in the amazon's way.

Overall, here is how I would have tackled it.

By the way, for various inputs your code seems to produce incorrect results. For example, for king at 'f7' and amazon at 'e7', your program claims there is a stalemate when the king starts at 'h8', while 'h7' is a safe escape. It's likely you didn't properly calculate that the king blocks the amazon's movements along the 7th rank right from the king.

I think the original proposal as well as answers given so far are not in adequacy with the simplicity, and even statement, of the problem. As it is formulated, the most natural answer is just to loop over the 8 x 8 squares and increment a counter for the respective case, for each allowed square:

Now we just need the simple if not trivial functions forbidden() (too close to the enemy king), threatened() and can_move(). If we insert them somewhere before the above loop, they can access the coordinates (kr,kc) and (ar,rc) of the white king and amazon as variables defined within their environment:

That's all that is needed to solve the problem in a simple, self-explaining way.

Not the answer you're looking for? Browse other questions tagged python programming-challenge python-3.x chess or ask your own question.