I am currently trying to translate an algorithm for the procedural generation of dungeons into code. For this matter I have divided the algorithm into phases and have come up with a solution for the first step and in this first post concerning the first phase I would appreciate feedback on the general implementation and specific questions that came up.

I hope you don't mind that I have chosen a title that describes two different approaches which arguably yield the same result I want to achieve here.

I want to write a function GenerateGrid(mapWidth, mapHeight, maxRoomWidth, maxRoomHeight) that creates a two-dimensional grid of size mapWidth x mapHeight and fills it with smaller rectangles (rooms) that adhere to the following rules:

My naive approach revolves around traversing the grid in right-down direction and attempting to fit in a room of random size if possible until everything is claimed. 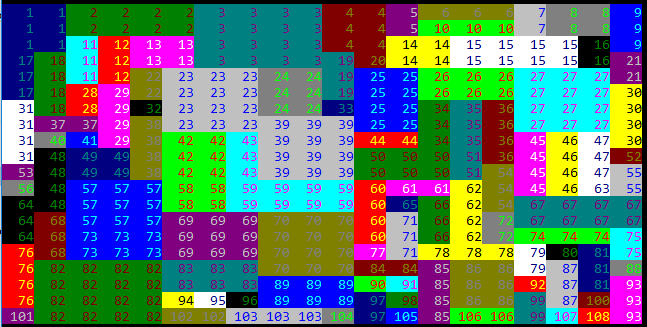 It's a private function, do you ever call it without parameters? With just 3 parameters? I'd guess not, remove those default values (and if you really need a function to quickly generate a map using all the default values just add an overloaded version).

Also you do not validate function arguments. It may be OK for a private function but at least add Debug.Assert() as appropriate (for example Debug.Assert(maxRoomWidth <= mapWidth) or whichever other rules you have).

Here you're using a byte just to store the room number. You, however, repeat the same value in each cell of the grid and it's definitely a waste. Why don't you introduce Grid and Room classes? Room will have it's ID property and the Grid is, to begin with, just a list of rooms. Code will be slightly slower when searching but much easier to read:

Or, simpler to implement:

I guess you understand the point. I know this is an annoying change because you have to rewrite existing algorithm but you're using this data structure only because it's somehow handy for this specific task (not that much, IMO) but it'll be a pain when you will need to use it in your actual game code. Note that if you need to simply keep track of used cells (still producing Room objects, of course!) you can use a simpler data structure like a bit map (not an image but a grid of bits!)

If in future you will want to generate rooms with a different algorithm? You may consider to implement a Strategy pattern to inject the allocation algorithm. This will also make testing much easier (without relying on randomly generated data) because you can prepare well-defined layouts to complete (something you can't do if your only interface is GenerateMap().)

It doesn't make much sense to comment the other code given that I'd radically change it because of the above but few notes.

Nesting is ugly, I agree, but do not try to hide it in this way. If you feel that a code snippet smells or it's hard to read then it's time to extract a method for it! For example:

Of, if you love LINQ:

Or (assuming you have a ForEach() extension method on IEnumerable<T>):

The same should be applied all around to other parts of your code. Pretty often loops are a good indicator that it's time to introduce a separate method.

Your while loop will greatly benefit from a refactoring, move it to a separate method and it'll be easier to read. Note that you use isColliding only to exit the loop then imagine this:

Of course we should have a separate IsColliding() method but we already introduced a Grid class...

Why first you use mapHeight and mapWidth in your loop and at the end you use grid.GetLength(0)? A difference is eye catching and future reader will stop and think...think...think...to finally deduce that matrix size is still what specified in those parameters and mapHeight may be used.

Not the answer you're looking for? Browse other questions tagged c# performance algorithm game or ask your own question.

7
Improved manipulation of a 2D array for a game map
3
Number of paths in a grid (lattice) graph
15
Do they have the POWER?
8
“Dungeon Game” solution
6
Efficiently counting rooms from a floorplan
11
Efficiently counting rooms from a floorplan (version 2)
3
A* Pathfinding for a Game
9
Hunt the Wumpus game in C++
4
The Dungeon game