I wrote a Hangman text-based game in Java that needs to include the features that I included in the comments of my code.

The code I wrote below works and has all the features I listed. But it seems not optimal and probably with very poor etiquette, as I'm self-taught thus far. Therefore, I'm looking for any advice that will make this code better and to ensure I don't get into any bad habits (I probably already have haha) as I continue to learn Java by myself.

Sample output of my code for reference if needed: 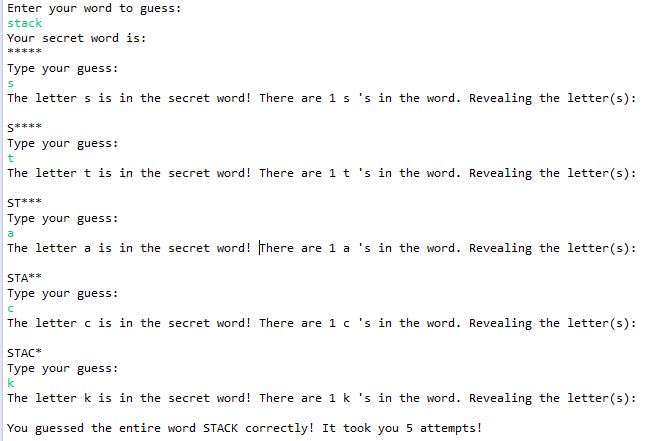 You create two scanners, one inside the loop and one poorly named at the start. I rename the typedword to input and replace uses of guess with input.

would be better written

Similarly I alter other if statements

I would use a Set<String> to store past guesses

I've moved the declaration of times to within the !repeated loop so that its declaration is nearer its use, and limited in scope to its use.

Other declarations have been joined to the setting of the value, and some assignments chained such as the new

tempstring has been removed, it is only constructed now when needed

a number of variables have been renamed for more explanatory names.

Thanks for sharing your code! It looks pretty good, but(as always) there are some things to fix and look out for:

Not the answer you're looking for? Browse other questions tagged java hangman or ask your own question.