I have a game that consists of

I wonder if there is another easier way to get the output as shown in the linked image. The current routine is 2680 lines long. 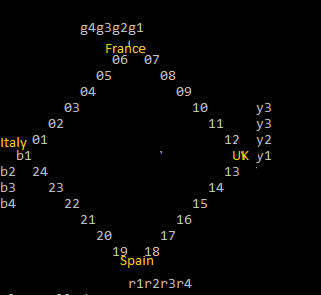 There are a great number of things you could do to improve this program.

Putting using namespace std at the top of every program is a bad habit that you'd do well to avoid. I don't know that you've actually done that, but it's an alarmingly common thing for new C++ programmers to do.

It seems to me that printing the board shouldn't (and apparently doesn't) alter the underlying object. If that's the case, it should be declared const to relay and enforce that fact.

It's not at all obvious whether 201 (mentioned in the comment) or 211 (actually used in the code) is the correct value, or exactly what it represents. Better would be to use a named const value to avoid such confusion.

There are essentially two different things involved in printing the board. The first is each individual data item and the second is the location on the screen. Also, the board is symmetric and is, more or less, four different quadrants. Each quadrant has a single country name. If we consider each country's "home" positions as four independent positions, the middle-of-board positions (e.g. the ones you've got labelled "G1" through "G4") and the positions on one side of the diamond, there are 15 possible different positions in which a particular soldier might be located within each quadrant. Since computers like base-16 numbers, let's say there are 16 and simply skip one. If we number each position with a 2-digit hex number and omit That layout looks like this:

Using this we can write a nice, neat print routine, but first let's look at objects.

You have a board and four countries/players, each with four soldiers. It seems that you have an object for the board, but it's not clear that you have implemented objects for the other things. Doing so would greatly simplify your code. Here's one way to do that, using C++11 constructs and libraries:

Use an ostream operator<< to print a class

Instead of using a named member function to print the class, I usually find it makes the object easier to use if instead we define an output stream operator. In this case, a friend class declaration within the PlayBo class might look like this:

Here's an implementation using the classes shown above:

Now all that remains is to implement the helper function which returns the string to be printed, given the location. This is one way to do that:

That function does a rather simple-minded linear search for each soldier location and prints either that soldier's designation or the appropriate string if the location is empty. By numbering things cleverly, we can make the code easier to write. In this case, only the empty places along the diamond are printed, while the starting places and the inside-the-diamond locations should be represented with spaces. Note that all we need to do is look at the low four bits to determine aht classification. That is, anything the is in the range of 0 through 7 should be spaces if the location is empty. This keeps the code small and simple.

Make sure to #include all required headers

This program apparently uses std::cout and a number of other things from <iostream> but doesn't show that #include. To make it easier for reviewers to review, it's useful to explicitly put all required headers in the code to be reviewed. For the rewritten version shown above, you'd need these:

The code as presented doesn't appear to have been tested and contained some bugs. To avoid that, testing is very useful. Here's some extremely simple test code to exercise the printing function shown above.

Here's the output that produces:

I don't know if those positions or soldier designations are what you want, but with the revised code, those are trivial to change.

Use a better random number generator

The code currently includes this line:

Unless RAND_MAX is evenly divisible by 6 (and it's virtually certain not to be), then rather than an equal probability for all numbers 1 through 6, this will skew to the lower numbers. In C++11, we can do much better:

Now when you need a die roll, use the object instead of that.

This generate 3 million die rolls and on my machine, it takes about 500ms.

Can be greatly simplified if you take out the common bits.

I hope that inspires you to simplify the rest of the code.

The next section is a classic example of when to use an array:

You have 16 soldiers. Four soldiers from each country.

Not the answer you're looking for? Browse other questions tagged c++ game or ask your own question.