There are a lot of parameters I would like to configure for my Analysis object, so having some kind of composition helpers is a big thing to simplify proper use of it. Let’s say that we have only 3 parameters for the sake of clarity (there are a way more, but amount of code in C# is overwhelming):

I would like to keep them in an immutable object with two ways to specify parameters:

So order/amount of parameters to override is not under C# control: 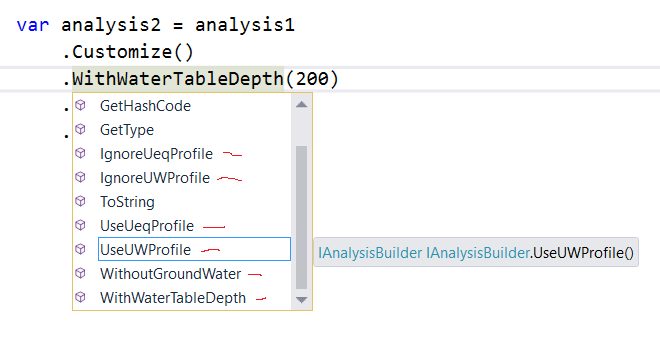 Wizard scenario requires all the parameters to be specified in the predetermined order:

Here is the implementation of the Analysis class:

Where builder API is:

And defined in Analysis as well:

And implementation (in the same class):

It is easy to consume, ISP rules, but amount of implementation code is crazy...

I feel like this approach isn't particularly helpful. Don't get me wrong, I think the fluent API is cool, and the use of some kind of "workflow interface" is a great idea but :

Now, if you truly have a lot of parameters, nothing stops you from changing the private setters to protected ones and set the values you want in the constructor of the subclass.

Now, maybe I'm wrong, maybe there's no logic in the creation of the object and there's nothing to regroup. Still, I have some things to say about your implementation :

That feels wrong. The building aspect of your code shouldn't be coupled to your logic class. The builder has logic itself, don't make it part of the Analysis class, it'll become huge. Doing so, you could do something like this, which feels much better :

To resume, I don't feel like a Builder is the way to go unless you're 100% sure that there's no business logic to encapsulate in your different Analysis parameters combinations. If you stick to the builder, separate it's logic from the Analysis class.

Considering there's an "unlimited" amount of parameter combinations my previous approach won't work. If you really want a Builder, we'll make one that is separated from the Analysis class. After all, in an OOP perspective, building an Analysis as nothing to do with the Analysis itself! One of the main problem I see now is that considering Analysis itself is a builder, I could do something like this :

Now what? I didn't call Build, is my object in a good state? Is this what I want? Who knows!

Your base interface is fine, but Analysis shouldn't be an IAnalysisBuilder for the same reasons an House class isn't an HouseBuilder.

You claim Intellisense will help you, but you're kind of wrong. If you use an interface, it's because you should expect people to use it. Meaning :

And your IAnalysisBUilder should return to good type of interface according to where you are in the object's creation workflow. I know nothing about your domain so let me make an example :

As for your builder itself, well, just take the code from the Analysis class that is used to build your object, and put it in a AnalysisBuilder class.

I have done the wizard one before it's a pain to keep track of all the interfaces and which one returns which method and it's even more painful if you decide to change the API later, I would stay away from it.

The case with the builder is too many constructor arguments makes it unreadable, but we have named and optional arguments now.

let's say that waterTableDepth is optional with some default value.

looking at the parameter info will tell you which arguments are optional and the default value for them. Even if it was 20 arguments I wouldn't mind looking at it.

keeping track of which arguments are mandatory and which are not with builder is not an easy task, but with this it will simply not compile.

First of all, I would stick with builder approach. But points written below also can be applied to wizard.

Not the answer you're looking for? Browse other questions tagged c# functional-programming or ask your own question.