Count lines with more the X dots on it

I have Python a Algorithm class with a calculate method that takes the list of tuples where every tuple have 2 integers (coordinates of the dots) and goal argument and returns integer - a number of lines that have more than int(goal) - 1 dots on it.

I have a Python-Tkinter UI that has a field with dots. A user can choose some of them, and program must show points for currently chosen dots after every new click (so speed matters).

I have a Python-Tkinter UI that has a field with dots. A user can choose some of them, and program must show points for currently chosen dots after every new click (so speed matters).

This kind of situation, where there are small changes to the input (here, adding a dot to the set of selected dots) and the algorithm must update its output (here, the score) in a timely manner, is known as a dynamic problem.

The code in the post starts again from scratch whenever the input changes. But this is inefficient: when a new dot is chosen, the code in Algorithm.init_vectors looks at the vector from each dot to every other dot. So if there are \$n\$ dots, it takes \$O(n^2)\$ to update the score.

However, as we'll see below, an algorithm that maintains a suitable data structure can process each new dot and update the total number of points in constant time. (Strictly speaking, in time that depends on the size of the field of dots and the goal value, but this is constant for any particular game.)

Accordingly, I won't review the code in the post, but instead present the better algorithm.

The key observation is that there is a fixed set of lines through each dot that have the goal number of dots (or more). For example, if the field is an 8×8 checkerboard of dots, and the goal is four dots per line, then there are eight lines through the red dot that we might need to consider: 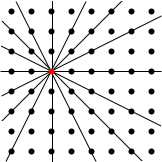 What this means is that we can keep a mapping from lines to the number of selected dots on each line, for example using collections.Counter:

And then when the user selects a new dot, we can update the mapping and the score like this:

What kind of objects are the line values generated by lines_through_dot?

Note that because we're going to be using these line representations as dictionary keys, I've been careful to avoid the need for floating-point arithmetic, because then it might not be the case that \$n·p\$ is the same for every \$p\$ due to the limitations of floating point. This is why I've not required \$n\$ to be a unit normal.

How are we going to implement line_normals? Well, it depends on how the field of dots is arranged, and the post doesn't explain this. But the code for the user interface suggests that it is a rectangular grid of dots. Where the dots form a regular grid it's possible to enumerate the lines by considering the possible slopes for the line. For example, if the field is an 8×8 checkerboard of dots, and the goal is four dots per line, then there are 74 lines altogether:

In the figure I've grouped the lines according to their direction, given as a vector \$x, y\$ below the group. The normals to these directions can be generated like this, using itertools.product and math.gcd:

The select_dot method updates self.goal_lines in time \$O\left({wh \over g^2}\right)\$, where \$w\$ and \$h\$ are the width and height of the grid, and \$g\$ is the goal (dots per line). This does not depend on the number of dots and so is constant for any particular game.

Not the answer you're looking for? Browse other questions tagged python python-3.x computational-geometry or ask your own question.

4
Program to count the number of lines of code
5
Class Vector with Python 3
3
Counting Lines and Sum of Lines
3
Remove “lines” from a 2D vec
8
Given a set of points and pairs of lines, count the number of points that are between the pairs of lines
1
Read n lines, and count the lines that do not contain the string “CD”
1
Getting hexagonal arrays of dots arranged in this spiral pattern
5
More elegant way to count anagrams in Python?