Ok so I am trying this task on a Code Challenge website, but I can't figure this out to do this fast enough. Because my current solutions has Time Limit Exceded Errors

This is the stated problem see images: 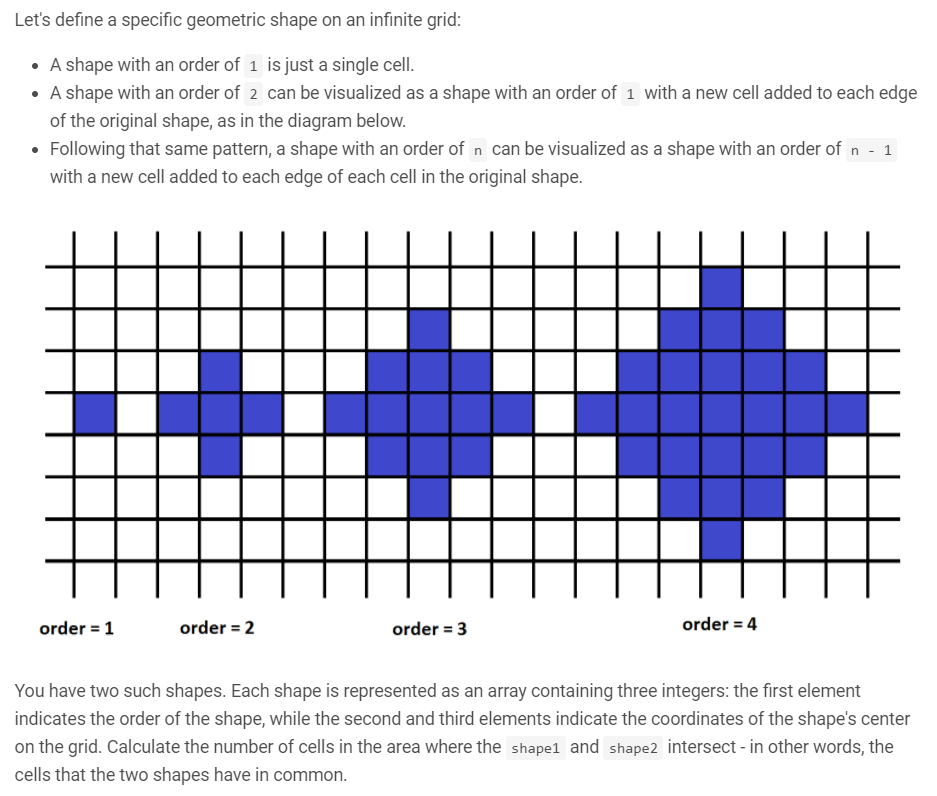 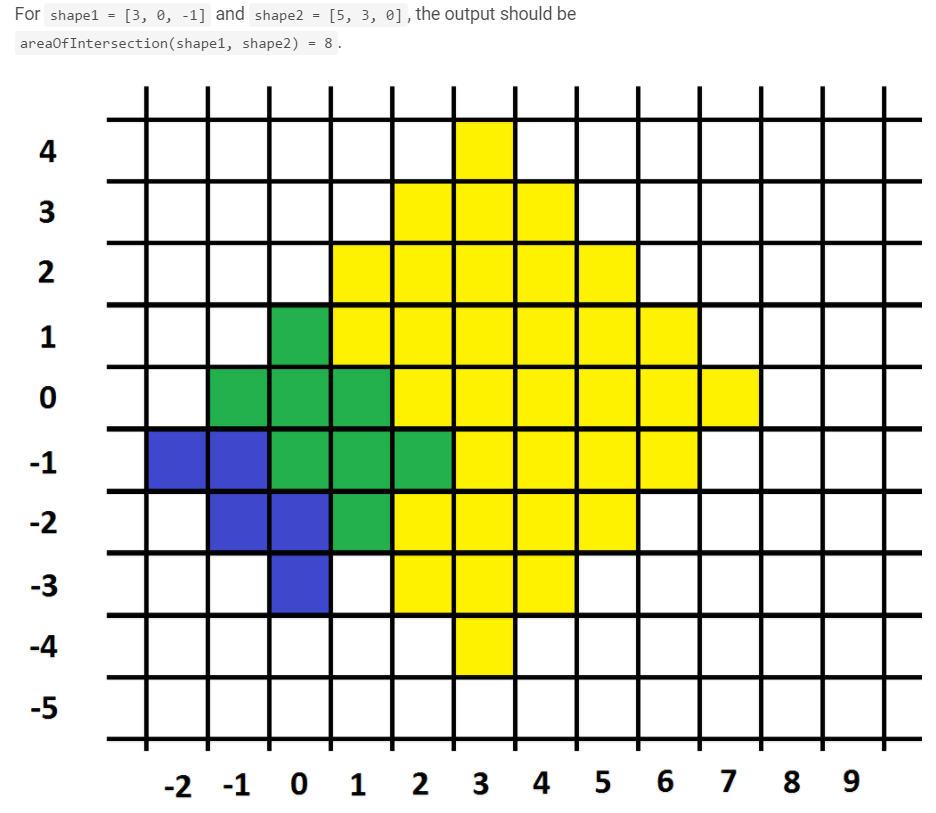 This is my current code:

Thus my Question is: How can above program complete faster?

I tried to add some logic to lessen the points to calculate but I am stuck...

My guess is I'm missing some simple math...

You can further reduce the time spent via taking advantage of the l1norm. The l1norm is the sum of the absolute values of a vector. We represent our coordinates as a 2d vector, the l1norm of that is the absolute value of x and y. Using this we can use the l1norm like distance (which happens to be the l2norm) for a diamond. Calculating the l1 norm and comparing it against the order-1 of the diamond will give us whether or not the point is inside the diamond, provided the point the diamond we are trying to figure out if the point is inside of or not is centered at 0,0.

This saves a lot of time, but if both of our diamonds are larger, and are nowhere close to each other we will still have to do a lot of work. To avoid this we can use broad phase collision techniques to reduce computational time in these scenarios, using something akin to sweep and prune. If we accomplish this via creating a range() that at first is our new translated smaller diamonds y - (order -1) and y + (order + 1). We then conditionally swap these values if the max y values of the larger diamond are in smaller more convenient ranges, so if the furthest upward y point on the larger one is at a shorter distance than what we use as our max y range, the we will use that instead, or with the furthest downward y point on the larger one is larger than what we use for our min y range, we will use that instead. If our smaller diamond isn't even in range of either of the larger diamonds y min and max values, our counting loop terminates as soon as it starts.

But we can go further with this idea. We will do something similar with the x values, except we don't need to use the bounding box version of x cutoff values. We can actually figure out the range of x on a per larger diamond y axis value. Since our smaller x y coordinates are with respect to the larger diamond being at (0,0) y actually corresponds to the same y location relative to the center of the larger diamond is. In fact because of the l1norm formula, we now know how to know the width (or half width) of a (0,0) centered diamond given one of its y coordinates. We know that our y is within the larger diamonds y range from before, so the formula is (larger_order - 1) - abs(our_calculated_y_for_smaller) since abs(x) + abs(y) = order -1 we simply do algebra to figure out that abs(x) = order - 1 - abs(y) and since we only need to know the half width, we are actually looking for abs(x).

Now that we know the half width, we can use the same method above to figure out the range we should be looking at for this y level with respect to the larger diamond, instead of niavely looking within the bounding box.

But wait a second. Now that we both know that we are only looking at values with that match the same y level on both our smaller and larger diamond, and we've been able to make sure we don't look at x's outside of the same x level why would we still need to check for each l1norm intersection?

What we can actually do is just sum up the difference between the max x range and min x range instead of using the l1norm, since we know exactly the range of values that overlap now!

now I doubt this is necessarily the fastest for very small diamond sizes, but I think this is the fastest no parallel asymptotic time algorithm for this specific problem that I could think of. You could theoretically do this for N dimensional diamonds as well, but you'd have to include broad phase at each dimension. This should certainly be faster than both of your solutions for any large diamonds no matter the situation.

Here is the implementation in python

The only faster method I can think of is some how accurately transforming these diamonds into AABB (Axis Aligned Bounding Boxes) and then computing the area overlap, but I'm not sure how one would do so with out loosing out on the exact number of pixel overlap. In floating point however, I suspect this to be the correct method to measure area overlap since you aren't going to be losing out on discrete value precision. In a floating point scenario one could also use the generalized quadrilateral intersection

By setting up a new coorediate system that is the orginal one rotates 45 degrees.

now in new x, and new y system, look for the boundary of both shape

lower x bound (inclusive) for each shape is

by doing the same for higher bound and y axis, we have xmin, xmax, ymin and ymax to identify the intersection shape, the problem then is how to count the number of boxes inside.

I made some mistake in final counting. if we do have difficulty how to correctly count the number, we can simply loop through the count.

Now I have an idea how to count correctly. Notice that in the new coordinate system, new x and new y must have the same odds.

as old x and old y must be Whole numbers, so that new x and new y must have the same odds. that is they must be either both even or both odd, no mixing. This makes the process easy for us to get the result. Simply count how many allowed even x and y, odd x and y, and times the numbers respectively.

By only calculating the range where they can possibly meet I lessen the calculationload.

And by checking if that point falls in the range of both shapes I can tell there is a intersection at that point, so no need to map all points which gave me a TLE.

Not the answer you're looking for? Browse other questions tagged python programming-challenge python-3.x time-limit-exceeded or ask your own question.