Fair preface: This is an interview question I would like to improve my knowledge of. I got some rest, and re-solved the problem with a fresh/unpanicked mind.

My main utility functions are:

My main concerns are:

Where the getChildren function relies on getCurrentVal removing the value from the string itself, that feels dirty.

I tried to keep the "spirit of the challenge" and re-completed this within the amount of time previously allotted (somewhere around 30-45 minutes). Suggestions and improvements need not consider this time restriction, but providing context is important.

Recursion would be a natural choice if your input were a root tree node with tree nodes as children - a recursive data structure. However, your input is a 'flat' string representation of a tree. A simple iteration might actually be much easier to implement, read and execute.

How should I properly be passing the altered string throughout the recursive function?

I think the recursive passing down of substrings representing nodes or node lists (children) is already pretty well done.

However, I would like to suggest a few improvements regarding the parsing functions and their return values:

The code is not very descriptive: It is not immediately obvious what this function does.

How about this alternative:

Also, when parsing integers, you shouldn't use JSON.parse(string) but the more specialized Number.parseInt(string) or the idiomatic type conversion via +string.

Considering the parens and values are removed as they are parsed, that lends itself to O(n), but I feel it's O(n^2) because of the duplicate parsing in order to create the child nodes. Is that correct? Can it be improved?

First of all, let's define n as the length of the input string. Then, let's look at the complexity of the helper functions:

Now, we can tackle the complexity of getValueForLevel:

Adding the complexities together gives us: 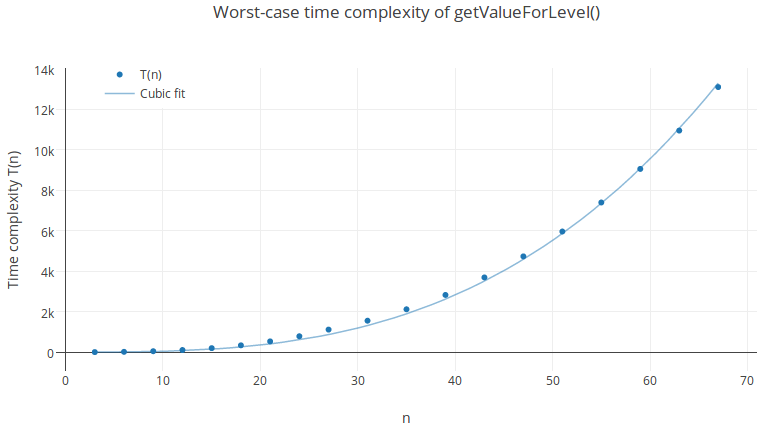 In general, the runtime complexity is bounded by O(kn²).

Some notes, in no particular order:

Now, if the idea is only to sum the nodes at each level, you can actually skip a lot of stuff.

Namely, there's no reason to build a graph. You can just read the string from beginning to end, and get the sums:

Note, though that the above doesn't do much input checking. It doesn't, for instance, check that parentheses are balanced, meaning level could go negative or skip ahead, which wouldn't make sense. However, checking could be added without too much trouble. I'll leave that as an exercise for the reader though.

Incidentally, another way to write the above, using replace as a regex scan-like function, would be:

This has even less input-checking, though.

Not the answer you're looking for? Browse other questions tagged javascript strings interview-questions binary-search or ask your own question.