Now I have took some (not all) good points from the previous iteration.

There is however a trick to remember: Whenever we read the weight of an edge \$e\$, \$w(e)\$, we set instead \$w(e) \leftarrow -\ln w(e)\$. Then, compute the ordinary shortest path in the same graph using the modified weight function. Since the algorithm does not update the actual weights, one can recover the cost of the most reliable path from the original graph. 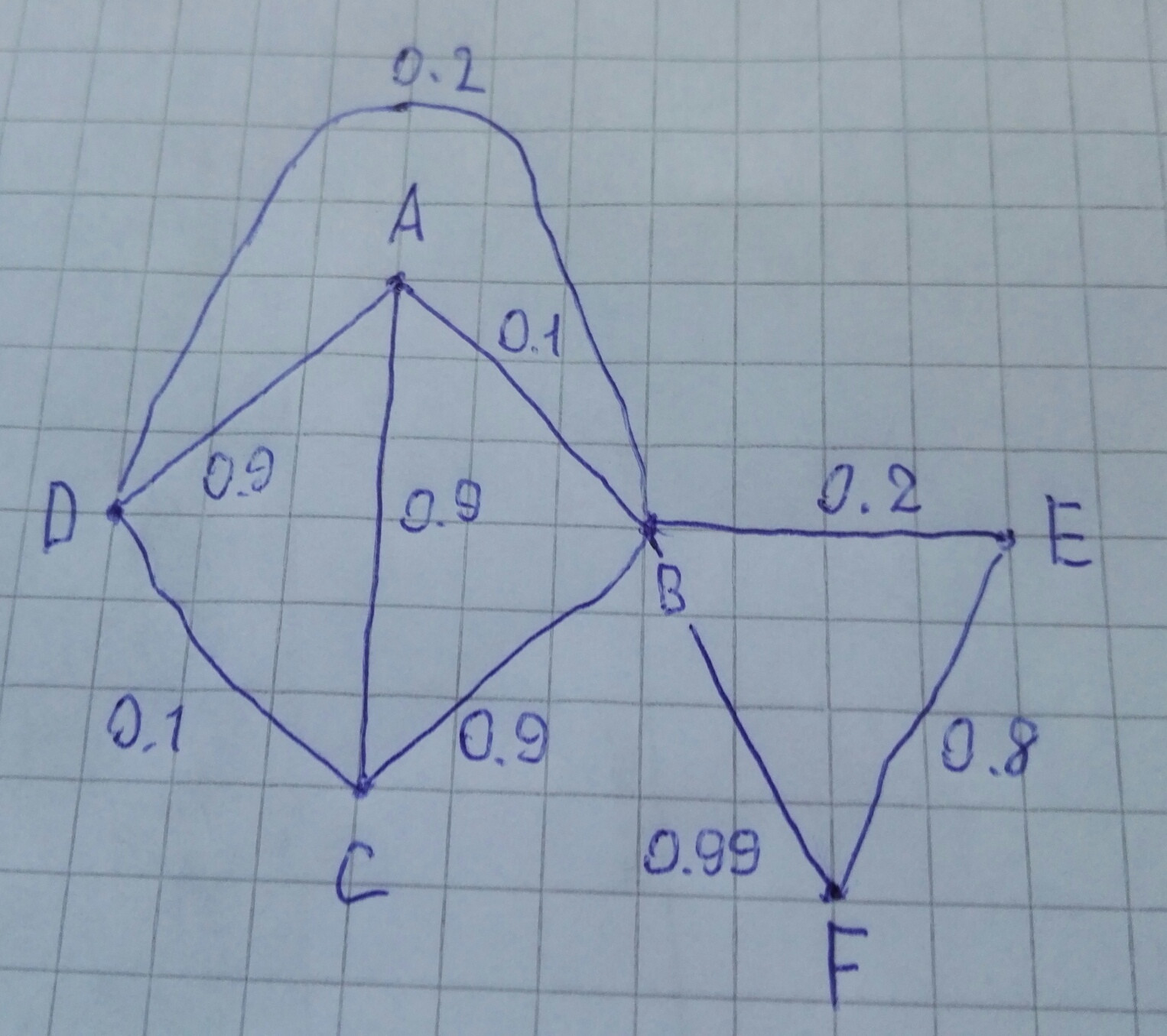 The demo output is

As always, please tell me anything that comes to mind.

I'll start with what I consider the most important and move on to the less important:

The fact that MostReliablePathFinder contains no state (no fields whatsoever) is an indicator that it is not a proper class.

Because of this, you create an instance which lives only briefly. You don't even store it (and indeed there is no point - every PathFinder is identical). You create it and destroy it immediately.

The first little refactor would be to make findLeastReliablePath a static method. Now we don't need to create a pointless new instance when we want to call this method.

But hey - now we have a "class" that only contains static methods! This is a bad thing if we can avoid it. It's a procedural way of thinking, not an object-oriented one.

When you think about it, findLeastReliablePath should really be a (non-static) method of a Node and it should only take one parameter. We should be able to say:

Your probability comes in as a primitive double connectTo(... double probability), which then gets implicitly wrapped (meaning an object is created), simply for the purpose of checking whether .isInfinite().

In fact you don't need to check this. probability > 0.0 && probability <= 1.0 is sufficient. Now we can pass the function a regular double and don't need to worry about the extra object. That said, it's now so short I wouldn't even bother having this as a function.

Even though I am an advocate of small functions, I think I would move the contents of checkProbability in to connectTo. The fact its a void function which does nothing apart from maybe throw an exception doesn't sit well with me.

findLeastReliablePath is quite a long function. You've done a good job of keeping functions nice and short everywhere else in your code. I would try and split this up. 20 lines is my usual personal maximum.

I don't really understand what your for loop is doing but that seems like a good candidate to be moved to a separate function. It would make it more readable too because you would have fewer levels of indentation.

It's possible that the following function will return null.

Both of the callers currently don't check for this. Indeed, the manner in which they call this may mean they don't need actually need to.

Anyway, returning null as a sentinel is a bad thing, even if it's implicit as it is here. Perhaps return an Optional<Double> or throw an exception.

Use final more often, both in function prototypes and for local variables. It adds some semantic meaning for a reader of your code because it shows them what values you expect to change.

It can also prevent you from making silly mistakes because you will get a compilation error if you try to change a variable you didn't mean to change.

Unfortunately, final in Java is not the best. It leads to long lines. I very much like Project Lombok's val which you may be interested to read about.

NodeHolder is this really the best name for this class? Why not Edge or Connection?

As it's only an inner class, I wouldn't worry about providing a getter - it's just unnecessary fluff. Just make the fields public and final instead.

Overall, you've improved this a lot since the last iteration so well done.

Not the answer you're looking for? Browse other questions tagged java algorithm pathfinding or ask your own question.