I'm currently working through "Algorithms in java" by Robert Sedgewick (3rd edition, german version) on my own and am trying to solve one of the exercises there.

Edit: This question now also has a follow-up question here.

Translation of the exercise

Write a program to check if 2 int arrays of N whole numbers between 0 and N-1 represent 2 isomorphic unordered trees, if you interpret the arrays as predecessor-successor-connections in a tree (e.g. in an int array index 3 has value 5. That means the node with value 3 is child of the node with value 5) , while the nodes are numbered from 0 to N-1. That means, your program should determine if there is a way to re-number the nodes in a tree, so that the array-representation of one tree is identical to the array-representation of the other tree.

Since we are talking about unordered, rooted trees whose order of nodes does not matter, I think this exercise asks also if the nodes of one unordered tree can be rearranged (while keeping general connectivity between nodes intact) in such a way that it is shape-isomorphic to the other. As such, unordered trees that at first glance don't seem to be shape-isomorphic might still be, that needs to be accounted for.

(Question on the side: Does this qualify for the programming-challenge-tag?)

(2 Examples for the sorting can be found at the end of the post).

WARNING: The below code contains 3 bugs (1 in "sortForest()", 1 in "compareTrees", 1 in "compare", all of which have been mentioned and corrected in my answer to this question.

I'd appreciate it if reviews of the code itself focused especially on the recursive methods, since I think that's the part where I'm struggling the most.

Examples for the sorting

2 examples for the sorting of the trees: 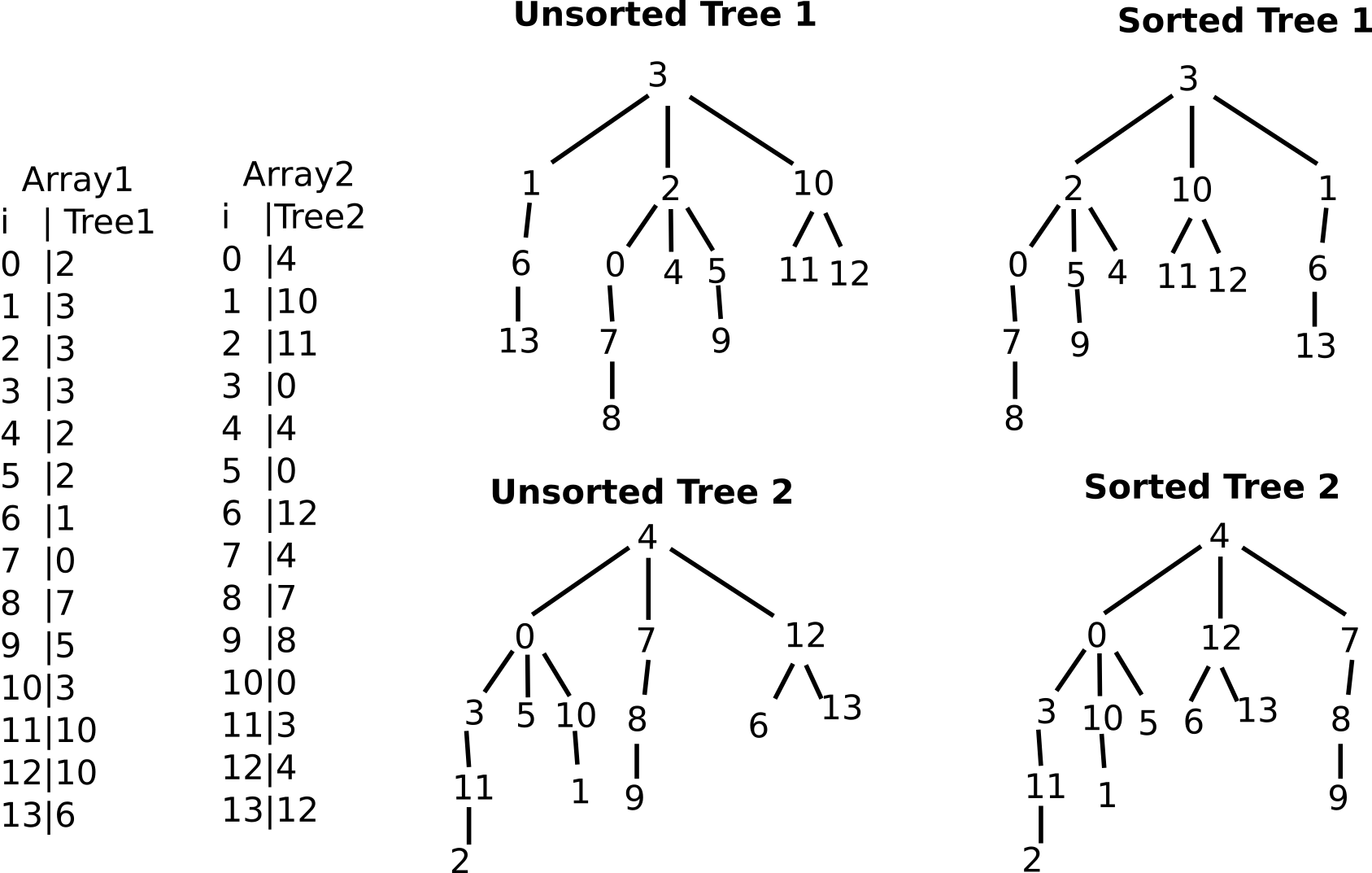 It looks like you have a small bug on your compare function. You don't change result, if compare returns anything. This means your else always returns 0.

The code given above is buggy and non-functional, which I did not notice until Peilonrayz pointed it out.

Another bug is that "sortForest()" invokes the sort method of the ArrayList inside the forLoop, leading to incorrect sorting that doesn't throw an error. That should look like the following:

An additional bug is that compareTrees() does not stop comparing once a difference is found. It needs to include "treesAreIsomorph" in its conditions to check in the forLoop.

Those are on top of the bug that Peilonrayz already found, whose correct version is:

Not the answer you're looking for? Browse other questions tagged java algorithm sorting recursion tree or ask your own question.