I love pizza and design patterns. This is my first program to practice the builder pattern of GoF, without fluent interface. I put emphasis on the structure and characters of builder pattern.

Here are some notes, hope it will help you read:

The PrepareTips is the result of a technique called Simple Factory. It's not a pattern but quite useful since it moves the variation part out of its client, the recipes.

There are a lot of points to improve. If you found anything that causes it not a builder pattern of GoF, put emphasis on it, thanks.

Maybe I should make two specific pizza types, CheesePizza and MeatPizza, but sorry, I didn't. I just want to focus on all the main characters in builder pattern. Hope this will not disturb your reading. 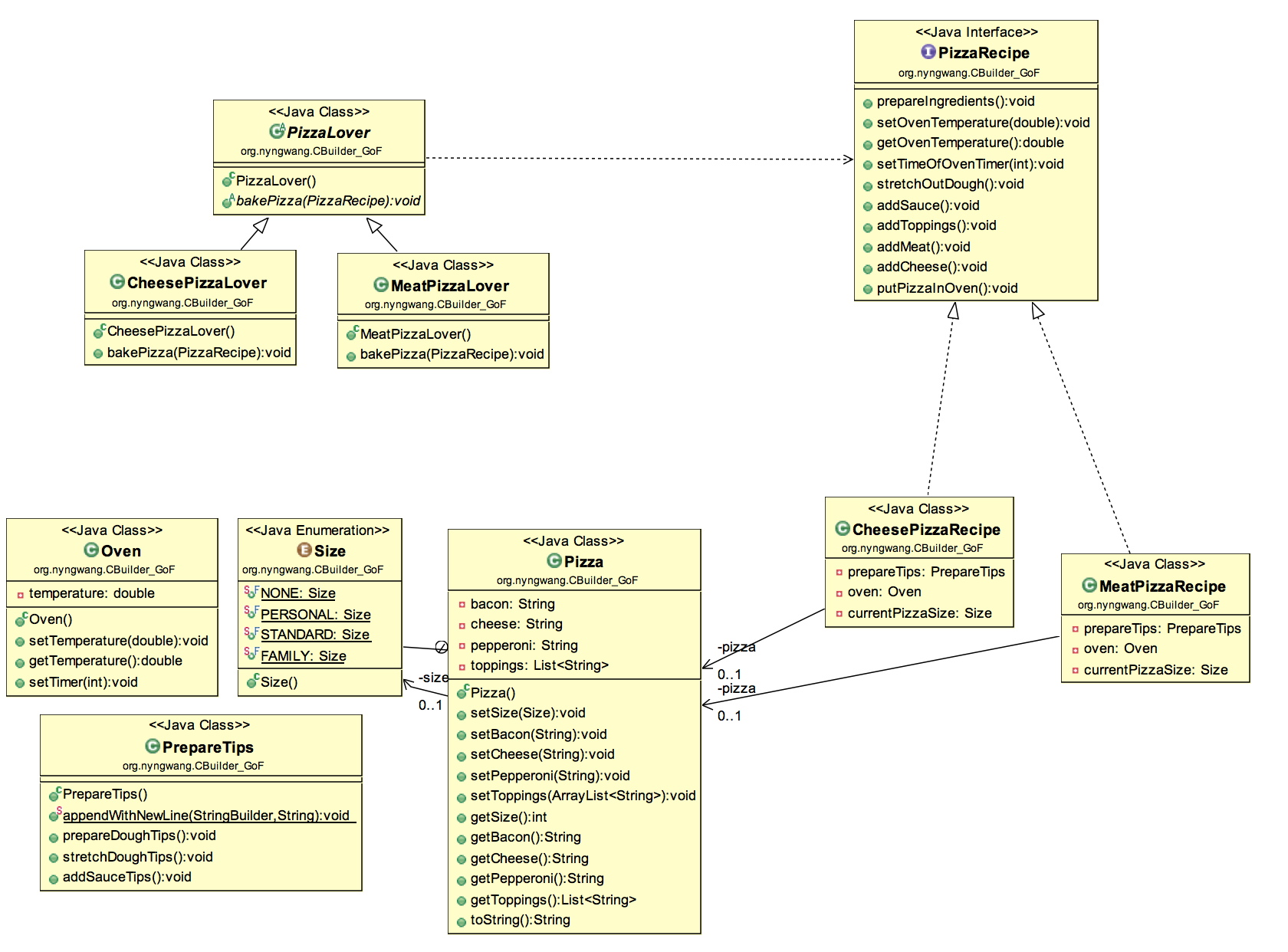 I think you model the domain wrong.

Consider modeling Instruction (as abstract) and Ingredient (as enum?) as well - that way you could make something like an AddToppingInstruction. I don't wanna go to deep with the recipes, so we'll keep it simple on that front.

Looking more at the diagram, I also think that the current program doesn't work with a user. The user does not get to decide what pizza they want. Pizza lovers are forced to make a pizza they love only to have it taken away. This doesn't make the pizza lover or the user happy.

We'll set out to do the following:

In order to avoid serving customer unfinished pizza's (and to have the whole builder pattern make sense to use, since it's rather hefty), we should make it so that all Pizza's are built and baked. That is to say, a Pizza is done after instantiation.

Your current Pizza isn't a finished pizza, it's a pizza that's in a certain state of construction.

Consider making a Pizza that does not have setters, just getters (to examine the Pizza) and action methods (to eat the pizza).

You can reuse your current Pizza class as an UnbakedPizza class.

Create a new PizzaBuilder class which has the job to, well, make Pizza's. They're instantiated with an Oven, and will give Pizza's when handed a Recipe.

I've written parts of a PizzaBuilder here to give you an idea how a Builder class would work.

The goal of a builder class is to hide all/most the object creation logic, which may involve filling defaults, defining buffers etc, from the client.

So, how do you use this builder?

Part of a useful builder is the ability to either tell the builder, or another related object that the builder accepts, what you want from the builder. That's where the PizzaRecipe comes in.

This would be one of your consumers. They're doing... mostly the right stuff, but on too low an abstraction level. I think they're on the wrong side of the counter! All this stretching, adding ingredients, and baking is part of the PizzaBuilder's job!

The PizzaLover, instead, as the client, defines the recipe.

Think about how Dominoes and other pizza ordering places work. You can pick a size, a bunch of toppings, and this "recipe" is sent to the Pizzeria. You personally don't have to know all the details to get delicious pizza.

I'd even say that in the pseudo code example, the bake time and temperature should be based on dough type and size (pizza business logic!) and not something the customer provides. How is a customer supposed to know how long they want their pizza baked? They just want a "regular dough medium sized meat lovers pizza".

Anyway, I think I've rambled on enough about how I think you could model the Builder pattern better with pizza. Let's take a look at the code.

If you need to clone a list, just make a new list. Additionally, why do you need an ArrayList? Just List will do - you don't care that toppings are neatly into an array, just that they're ordered in some way so your pepperoni isn't buried under the sauce and cheese.

This toString() assumes pizza's always have bacon, cheese and pepperoni. Consider treating cheese, bacon and pepperoni as toppings (four cheese pizza? How would you currently model it?). You can then make use of streams and Collectors.joining:

The last issue in your code I see is that InterruptedException is being defined as a checked throw everywhere. It's leaking.

I'd recommend that you catch it in the Oven for now. Later, you'll want to move baking a pizza to a separate thread, so that the PizzaBaker can take and work on multiple orders whilst waiting for the Pizza's that are in the oven.

Not the answer you're looking for? Browse other questions tagged java design-patterns or ask your own question.