Using hashing to create a PRNG with seed

So I wanted to code a simple PRNG for generating terrain in a game. It has to have the following properties:

These are some outputs produced by my program:

1 as input (x) gives 2 as a pseudo random number

2 as input (x) gives 2 as a pseudo random number

I don't know why it had to be so long and to have so many temporary variables. So I shortened it to make sense out of it. Here's what I got.

It is still not obvious to me, what are you attempting to achieve. Could you provide:

To me, there are a lot of unnecessary steps and manipulations.

All these things seem very excessive and result in a messy code IMO.

Updated the code to use symmetric GetChars and GetBytes based on the same encoding.

Frankly, I am not finding the updated question very explanatory. The signature of the original function does not declare meaningful parameters. So I had to guess what their meaning is.

I also don't understand why a regular Random.Next*() won't work for you. It's trivial!

If you really want to stay away from System.Random, you can use SHA1CryptoServiceProvider as you do in the original code, but I don't see why it is necessary.

Lastly, I don't see why do you need to use any string representation at all and go through unnecessary steps with Math.* which make your function computationally heavier.

Please consider accepting the answer as it does the job, OR carefully describe the acceptance criteria. Your problem statement is unclear!

Okay, you updated the question with the important info, which I quote here

need to generate terrain so say we have a line that consists of dots with an X and a Y value. The X values start at 0 and can go to positive and negative infinity depending on the player position. Depending on the X I need a random Y. System.Random gives a random number and then another random number based on the previous one. If I would only move to the right I could keep on generating terrain based on the previous dot using random.Next () But if I wanted to go back I would need the previous number with you can't do with Random.Next().

This is the new version of the function that should meet your more precise problem definition.

Notice that var actualSeedForRandom = seedInGame + specificLocationInGame; may be implemented in many various ways, I just used the simplest formula that came to my mind.

And here's what it produces:

In other words, your Game should pick a new seedInGame on every new map it's trying to generate. The value of specificLocationInGame will let you "teleport" anywhere within this particular map.

Update 4 - To Address Concerns About Randomness

Here's the exact code I used to generate some consistent but random number sequence. The resulting sequence can be downloaded from here.

I then used ent - pseudorandom number sequence test for checking how well the solution performs in terms of randomness.

I think, only the author can judge how far or how close this result is located from the desired one.

Update 5 - Visualizing the Solution (or How I Screwed Up)

Okay, I built a little tool to visualize the generated "random" sequence via the proposed algorithm (since I didn't find one online). The following picture demonstrates "little regularities" in the sequence... Well, the "random" sequence has very distinguishable regularities, so the proposed approach does not guarantee good results. I think, it's valid to suppose that approach in fact guarantees bad results. :(

@Wagacca, you were right in our conversation under my answer! 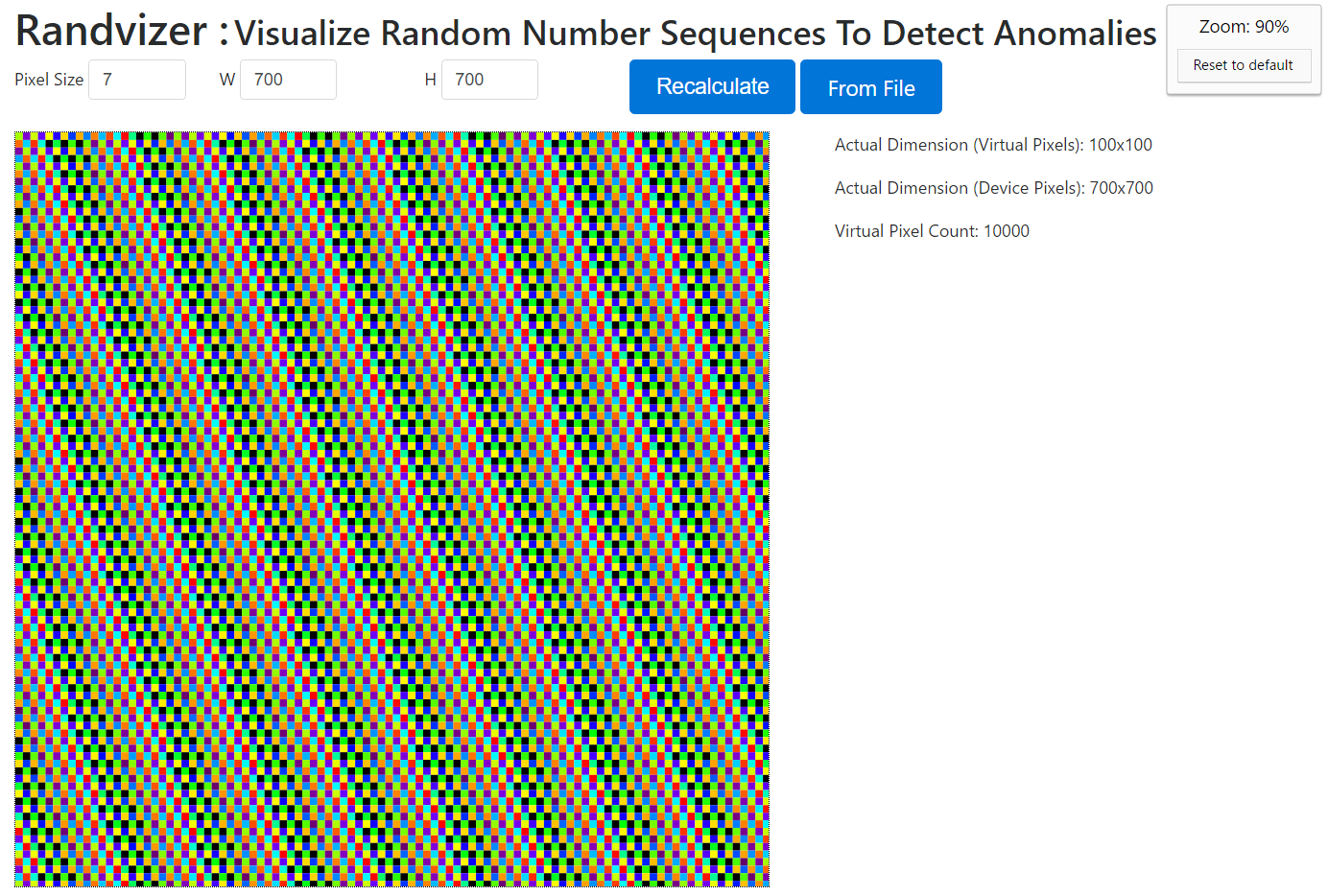 Not the answer you're looking for? Browse other questions tagged c# beginner hashcode or ask your own question.