The following is my little chat room system/structure. I've tried to follow the definition/intent of mediator pattern by GoF:

Allows loose coupling by encapsulating the way disparate sets of objects interact and communicate with each other. Allows for the actions of each object set to vary independently of one another.

But I still have a lot of questions about mediator pattern. This system is my trying and I need any advice about any aspect(pros/cons, alternatives, ...) of my design. All will be deeply appreciated.

These are questions you would ask after review my program:

Q: Why not make the RoomMate an abstract class instead of an interface, so it can keep an reference to the ChatRoom the roommate is currently in?

A: I think an interface would be more useful since a class can implement more than one interfaces in Java. (But all examples I've found from the Internet make Colleague an abstract class and make it keep a reference of Mediator...)

Q: Why do you repeat yourself that Amy, Andy, and Lily all treat the message the same way?

A: Maybe I should consider the strategy pattern. But I just want to focus on the Mediator.

Q: Ok, each concrete mediator knows how many roommates it has. But, reversely, if Lily wants to know how many rooms she has joined?

A: Actually I don't know how to solve this. (But I think maybe that's Lily's responsibility to remember what she's doing) 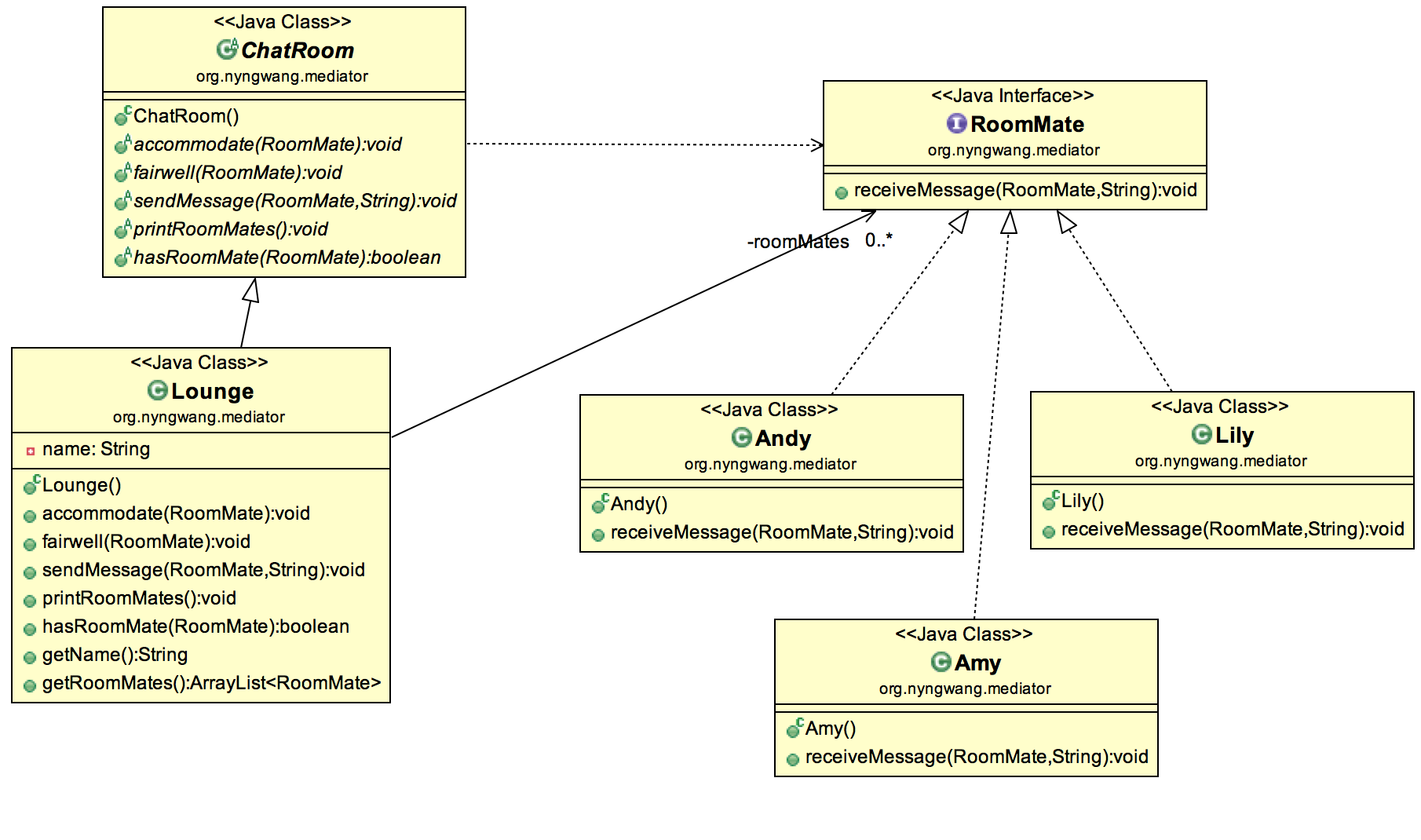 "Fairwell" is not a word. And ! ends a sentence, so the next word should be capitalized. We will miss you in the future when you're not here is more important than the current instant of emotion.

Since you never do anything but make a blank list of roommates, you might as well do the initialization at declaration time. You could do this with the name as well and get rid of the current constructor entirely. Or do something like

This allows you to set the name and provides a default if you don't do so.

It's worth noting that we only have to use this. here in the second one because the method parameter has the same name as the object field. If they had different names, then the this. is unnecessary. Some prefer it for clarity though.

This gets rid of the if not else structure. Now we check and immediately return if true. This makes the check implicitly untrue for the rest of the method. We dispose of the uncommon possibility before getting to the meat of the method.

This also saves us some indent on the bulk of the method.

This can be simplified to

The if (isTrue()) return true; else return false; pattern is a code smell. You can always simplify that to return isTrue();.

The contains method answers the question of whether roomMate is in roomMates. Consider changing roomMates to a Set instead of a List to make this more efficient.

There is an argument that people should never use abstract classes in Java because they restrict to single inheritance and because they make it unclear where the behavior is defined. That said, making RoomMate an abstract class would mean that you'd only have to write receiveMessage once. As it is, you have to write it once for each implementing class.

Inheritance examples do this a lot. They make a new class (type) for something that is really just a new instance. Andy, Lily, and Amy should not be classes in my opinion. Instead, make RoomMate a regular class and do something like

Now the name is a property of the object, not a class name.

So to register a new user, you just create a new instance of the class. In the original, user registration required code writing. Not something that scales to tens of thousands of users.

Much simpler all around.

Remember that design patterns are meant to help you. If you are doing things just to fit the pattern, then you probably selected the wrong design pattern.

You never actually use the Mediator pattern's strength, the ability to implement receiveMessage in different ways. You loosely coupled something that actually has universal behavior. It would actually make more sense to make ChatRoom a Mediator. I can think of a number of ways to implement farewell. So we could have a SpanishChatRoom, EnglishChatRoom, LeetChatRoom, etc. Each could have its own implementations of farewell, accommodate, and printRoomMates to fit the appropriate dialect. Of course, I would probably then tell you that the differences between those were just data and suggest that you move the translations out.

What CS.SE says about the Mediator pattern.

Not the answer you're looking for? Browse other questions tagged java object-oriented design-patterns or ask your own question.