Just for learning purposes i wrote an implementation of quicksort algorithm.

I made some modifications to the algorithm to make it faster, that are:

I benchmarked it a bit and compared the performance to std::sort; my algorithm, with random elements is faster than the STD one when there are more than 10000000, otherwise, with less elements std::sort is faster by some milliseconds(see below for actual benchmark results)

I tried benchmarking the same code with clang 3.8 un Ubuntu x64, and I got the same result as seen in the comments, so it is just visual studio with a slow std sort implementation

(I know those arrows suck, they are there just for clarity)

Please note that the images in the post are under license of MatPlotLib, since I've used the modules to draw the plots.

I've finally run the benchmarks. Although they were pretty synthetic, I believe I nuked things that could affect the benchmark to the best of my abilities. 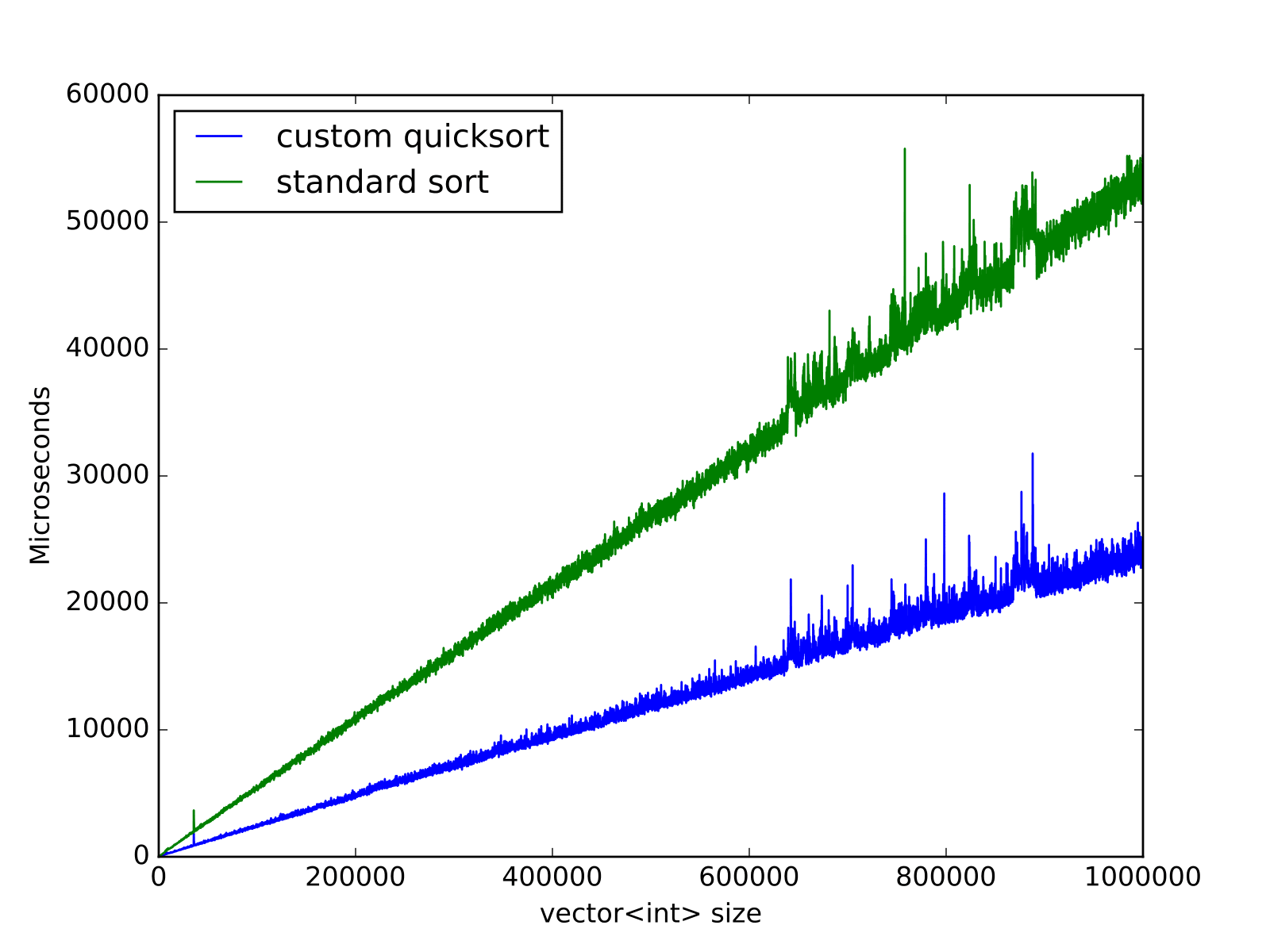 The image above is for elements in range [0; 100], generator: std::random_device (hardware, since intel cpu and libc++) 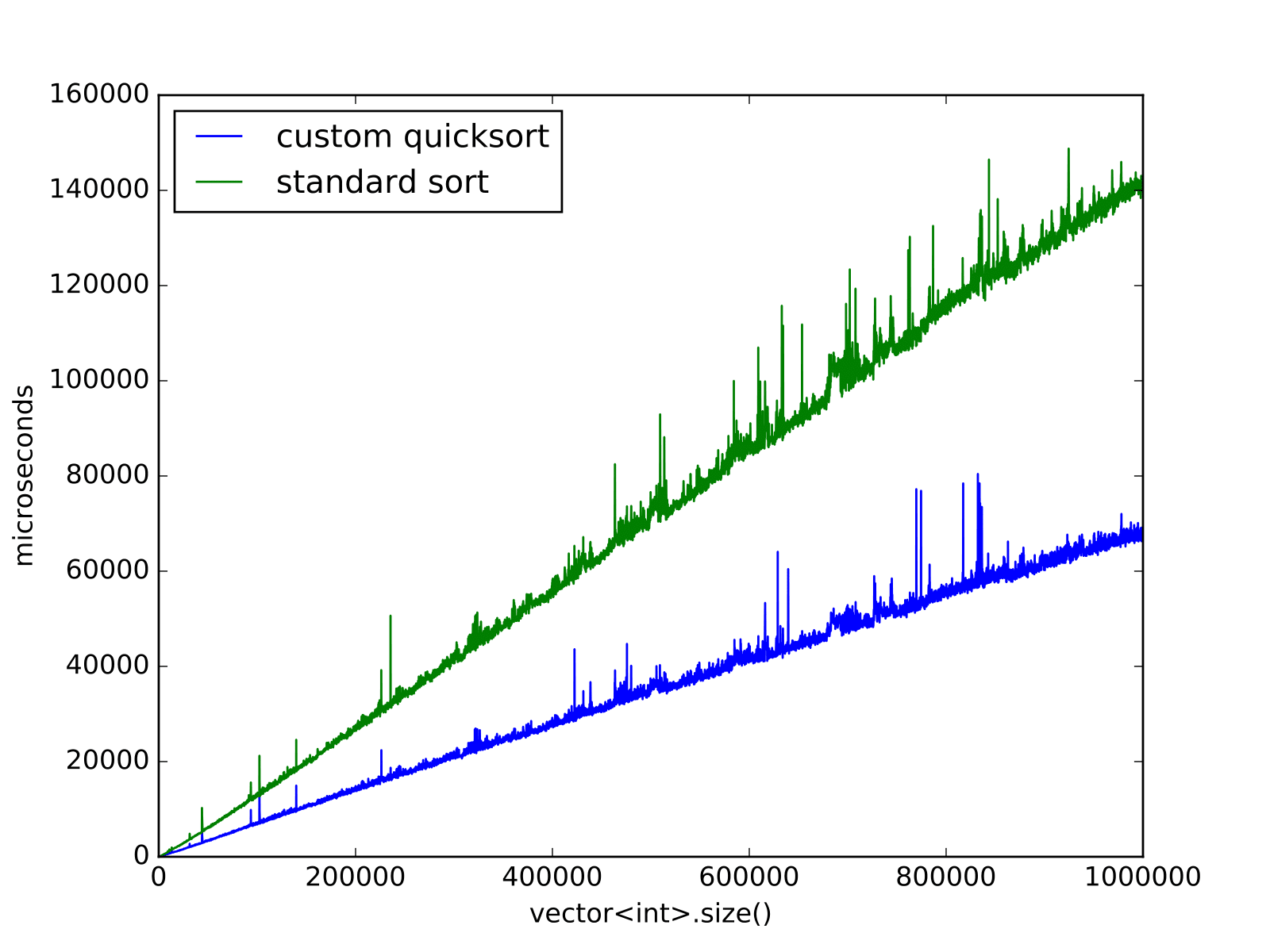 Do note that comparing two images doesn't make much sense due to varying setup and input range. Though the relation between speed and input range is pretty clear, especially for std::sort. The reason might be in more swaps that are to be made.

As you can see, your algorithm has algorithmic performance gain compared to libc++'s std::sort. The spikes near the end is me watching youtube videos, since the benchmark run for around 1.5 hours, and greatly slowed down at the very end. I believe the reason for slow down is not the algorithms, but the std::random_device (the overhead from it is excluded from the benchmark itself), so if anyone would want to benchmark the code in the future, don't use std::random_device to generate big data sets!

I've read somewhere on their bug tracker that their std::sort use some sophisticated quick sort. For further information I recommend having a look at this bug report.

I'm not great at algorithms, so I'll mention code style and some improvements for generic code.

Yeah, this is pretty niche. But hey, I can't remember what I've written a month ago, although I'm noted as the one who has pretty tough long time memory among my peers. You could at least keep a markdown or tex/latex file around with it that explains . It is impossible to oversell code clarity.

With C++17, I (believe) there are 7 categories. std::list will probably have bidirectional category, and it is probably good to fallback to merge sort. I haven't checked that myself, but my professor agrees with the post.

As a result, you could explicitly specify that you would "like" random access iterators, by changing declaration:

it will probably fix the conformance bugs coming from the specialized version that you've probably built on the current code. From personal experience I know that it is quite hard to get full conformance to specification.

That will probably increase type constraints. From what I've seen in the code, you don't modify it. So it should be:

The key to understanding is that for any function of the following form:

T will have references stripped of it if it is rvalue. Proof. So the code is practically copy constructing the pValue, which could be very expensive.

Although your benchmarking code is good to get a very rough measure of performance, I don't think it will suffise when you will start squeezing performance. Also, documenting your thoughts on every stage is going to be a very good approach. In short, all of the software engineering practices should be applied here, plus benchmarking:

Modified version of my benchmark v2.

Generator was slightly tricky to write to not cause slow down and not run out of memory:

Generation of the input happens outside of "critical section", so it shouldn't affect the benchmark. Also, the default is std::random_device, which is the reason why benchmark run for so long.

and a python script to draw the plots, which is I think irrelevant, since it doesn't modify the data at all.

I am going to look at think about how to improve your performance on sequenced data.

Not the answer you're looking for? Browse other questions tagged c++ performance sorting quick-sort or ask your own question.