Assembly beginner exercise: Calculate the square numbers from 1 to n

For to become more familiar with the concept of branching I made a tiny program. Inspired by an exercise I had to do once in school when learning PHP.

"Write a program which takes an integer given by the user. The program then calculates and prints the square numbers from 1 to the given number."

Here my source code. I have added comments in the code. Trying to explain my thoughts and motivations.

It seems to work as expected. 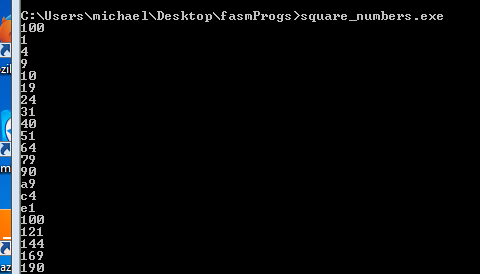 But I'm sure there's a lot of room for improvements ...

I suspect that the upper limit is in the ebp register. (Why else would you move it to ecx when the input is too large?) Then it would be better to not use the immediate value and just write:

Prior to the multiplication it is not necessary to zero the edx register. It's the division that needs this. This way you'll shave off some bytes.

You should test for overflow on the multiplication! You are printing results from the EAX register only, but look what happens when the square exceeds the 32 bits of EAX. You should use this overflow (EDX <> 0) as an extra reason to exit the loop.

You should write in a more readable fashion.
I suggest you make all the instructions, operands, and comments start in their own columns.

The biggest problem here—and generally with assembly—is the use of registers in the code without explicit documentation of what those registers contain, e.g., in the form of comments. Certain assumptions can be made based on common calling conventions (like that functions will return their result in eax), but that should still be documented for clarity. In other cases, it is not quite so obvious. For example, in this code, ebp apparently contains the "upper limit", but other than assuming that the code works and reverse-engineering its logic, I have no basis for that assumption. In fact, in the current implementation, the contents of the ebp register are a pre-condition for the function, so its use should unarguably be documented as part of the function's signature.

I further assume that ebp is actually just 1000000, in which case this portion of your code is overly verbose (and thus inefficient). You can simply do:

If you are targeting the Pentium Pro or later (so basically, any modern x86 processor) you can use conditional move instructions like so:

In some cases, conditional moves will make the code faster by eliminating the possibility of branch mispredictions. In this case, you won't see any performance improvement, but these instructions are still something to be aware of and this does make the code slightly easier to read. (Assuming that you want to keep the dependency on the ebp register, which might be handy if you want to make the upper limit variable. Otherwise, just hard-code the 1000000 and use the first version. Better yet, define a constant for that upper bound so you can give it a readable name.)

This is completely correct code for setting a register to 0. However, it is not idiomatic x86 assembly because it is inefficient. Both compilers and expert assembly-language programmers will instead write this as:

This works because bitwise XORing any value with itself gives you back 0. The advantage is that it is shorter (2 bytes instead of 5 bytes) and faster.

The only time you would ever want to use mov reg, 0 is if you didn't want to clobber the flags, which is handy when you're preparing to do a conditional move and in certain other tightly hand-optimized code. Otherwise, whenever you want to clear a register, think xor reg, reg. While this is arguably a micro-optimization, you really do need to know this idiom so you can read other peoples' (and compilers') assembly code, so you might as well use it yourself.

I can tell that you're working with signed integer values because you're using the l and g condition codes. If you were working with unsigned integer values, you'd be using the b and a condition codes. Therefore, you should be doing a signed integer multiply (imul instead of mul). In fact, imul is preferable for a number of reasons, chief among them is the fact that it has a normal, two-operand form that works just like any other instruction, which means you don't have to worry about the hard-coded register operands that mul requires. This makes the code easier to optimize and, frankly, easier to read. You can use imul for unsigned multiplications, too, as long as you aren't worried about overflow, since the lower 32 bits are always the same. (And clearly you aren't worried about that here, since your print_eax function used to display the output can only print 32-bit values!)

There is, unfortunately, one bug lying in wait here:

You are only checking the upper bound, so what happens when the input value is 0? Your code will print 1, when instead it should print nothing! Also, I wonder if it is possible for read_hex to return a negative value? I don't have the function's implementation, or any documentation for it, so I can't tell. If you're not confident that it won't ever return a negative value, your code needs to handle this case. Fortunately, you can fix both of these potential problems easily by adding a check for the lower bound before entering the loop.

And while we're nitpicking, some of your comments have "bugs", too:

In terms of readability, you should align your code into vertical columns so that instruction opcodes are clearly separated from their operands. This makes it much easier to read and scan. Also, you should either vertically align your end-of-line comments, or put them above the code.

I would also rename your createSquareNumbers label to printSquares, since (1) it prints output rather than simply creating things, and (2) "numbers" is redundant. I also personally like to use PascalCase for labels to make them distinct, but whichever is fine, as long as you're consistent.

Finally, I would prefer to use the ecx register as my loop "counter", since that's what it was originally intended for (the "c" stands for "counter"). Technically, this doesn't matter at all in modern x86 code, and you can treat all of the registers as general-purpose registers, using them interchangeably. And, indeed, in optimized code, you will want to do this. But when you're writing it by hand and don't necessarily care about speed, it is just nice and readable to use registers in a predictable way.

Here is how I would personally write the code for your function, taking all of these things that I've mentioned into account:

Warning: There is still potentially a bug in here, depending on how the print_eax function behaves. Normally, in most calling conventions, a function is allowed to clobber the eax, ecx, and edx registers. Therefore, to be on the safe side, you would have to assume that print_eax could clobber the values in these registers, meaning that you would have to either pick different registers to store your temporary values in, or you would have to explicitly save the contents of these registers before calling print_eax and restore them afterwards. However, if you know from the documentation or implementation of print_eax that it does not clobber either ecx or edx, then you are safe. Your original code had this bug, too, yet it worked properly, so I assume this is safe.

Not the answer you're looking for? Browse other questions tagged beginner assembly or ask your own question.