When tossing a dice many many time all numbers tend to appear the same number of times, but if the number of throws is small then some numbers may appear more or less often than others, even considerably if the sample size is small enough.

This program shows a updating in real time graph of SIDES bars (6 in default), each presenting how many times a number has appeared so far.

Please ignore that the numbers on the X axis are wrong, that is a minor bug-fix for later, all of the visualization is there. 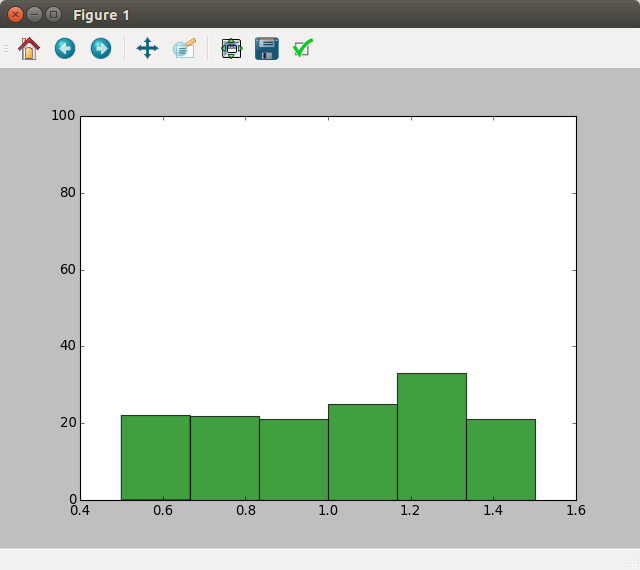 My code feels a bit messy, please help in organization and simplification:

You are doing a lot of unneeded stuff. I completely deleted the for loop in the main part as well as the second plt.show. I also removed the plot_points function. None of this changed the functionality of the program, as far as I can tell.

matplotlib.animation.FuncAnimation takes an optional fargs argument which contains arguments to be passed on to the animate function. So this gets rid of needing global variables.

I made update_results modify x. This makes the update_results function obsolete, because now we only need to increment the element at the index chosen by the dice, which we can inline in the animate function.

The code is generally not understandable for me, who is unfamiliar with the code, but already familiar with what it should be doing. This is because of multiple reasons:

And, also, there are some PEP8 violations:

Also, you can extract all the plot configuration and preparation steps into a, for example, plot_setup function (this is called "Extract Method" refactoring method).

As a side note, you may define the range(SIDES) before the loop to avoid reinitializing the range on every iteration of the loop.

Not the answer you're looking for? Browse other questions tagged python python-2.x statistics dice matplotlib or ask your own question.