Is the following procedure good for shuffling data in general (not just for JavaScript)?

Your algorithm is a variant of Fisher-Yates shuffle, and it's a good algorithm to shuffle a collection. A more common form is instead of using the last element to swap, you could have used the decreasing index i to swap, like this:

It doesn't matter much though, your version is fine too.

Something to improve is a bit cosmetic: it would be better to name your function with lowercase letters, shuffle, because it's customary to start with a capital letter only functions that are used to create objects with the new keyword.

Lastly, this is a bit tedious to type:

You could use this shorter form instead:

Not at all random

The short answer is NO it is a terrible way to shuffle and not at all random. You have a bias of 85%+, this value should be < 1% to be considered random, and 100% being no change.

Only the first item swapped looks random, but that's because it get swapped more often than any other item.

Going with the better version for now.

For each item swap it with a random position.

Swap the first item with a random position. The first item has a 8 in 9 chance of being above 1, so there is a good chance it will be swapped with a random pos again, but the item that moved to 1 will only have the random selection chance to be moved again. As soon as you have a system in which starting position changes the odds of being shuffled you add a bias to the shuffle.

Even if the result looks random to the eye they are not so in reality.

Example start with ordered 123456789 array and a count array, then shuffle, in the count array add one for the position the first item landed in.

Over time the difference from the lowest count and the highest count for any item should slowly approch 0%. 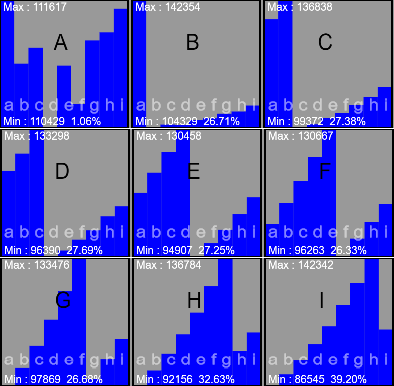 The test is of 1,000,000 shuffles each starting with the same array. As you can see the first item A has a good random distribution with the difference between the highest and lowest position of 1.06%. But all others had terrible bias. If it were gambling this level of bias would bankrupt a tote in a few dozen shuffles.

Look at the center one E, it is 27% less likely to be in its starting position than in the position one down, and approx > 50% chance of being in position b,c,d.

Using the algorithm you have can get better results by just shuffling the array more than once. This of course increases processing time.

You can instead randomly select both items for the swap each time and shuffle the array 4 times. This reduces the distribution of all items to around 1% for 1,000,000 shuffles.

But it is still not the best.

There is only one way to shuffle.

The only way to shuffle and be as random as the random number generator you are using is by random pick. You create a new empty array, then randomly select and remove am item from the original array and push it onto the new one.

You only need to touch each item once (excluding the copy if you do not need the array shuffle to be in place) and there is no bias inherent in the function. The only limiting factor to the randomness is the random number generator itself.

Not the answer you're looking for? Browse other questions tagged javascript shuffle or ask your own question.