The code works as desired, but I think it can be optimized.

Use the required #includes

The code uses strlen and memcpy which means that it should #include <string.h>. It was not difficult to infer, but it helps reviewers if the code is complete. It's also an important part of the interface. I believe these are the required includes:

In your findxy routine, the passed string is never altered, which is just as it should be. You should indicate that fact by declaring it like this:

Check for a null pointer

Things do not go well if the routine is passed a NULL pointer. On my machine, I get a segmentation fault and a crash. You can eliminate this hole by adding these lines near the top of the routine:

The days array is well named because it's easy to guess from the name what it contains. Likewise i and j are commonly used as index variables as you have done in this code. However, findxy is a rather cryptic name for what this does and c is a poor name for the passed string. I'd recommend something like this instead:

It's not strictly necessary to make copies of portions of the passed string. With a bit of careful planning, it can be done in place. Here's one way to do it, although it's not very efficient:

Use a finite state machine

We can create a much more efficient routine by creating a finite state machine. For a particular candidate string, we note that the first character must be one of {'F', 'M', 'S', 'T', 'W'}. If it is not one of those, then the candidate string can be immediately rejected. Now let's say the first character is 'S'. In that case the second character must be one of {'a', 'u'}. We can proceed like this, one character at a time to create a finite state machine. Here's a visualization of such a state machine: 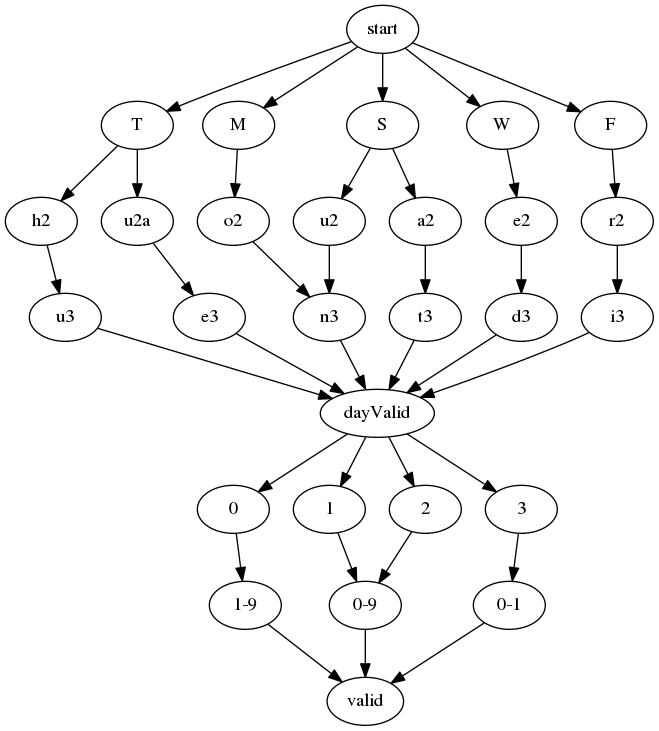 This is how compiler tools like flex and bison and lex and yacc work. The code is very efficient but might not be as easy to understand, so it's a tradeoff you should be aware of.

is guaranteed to be portable. The C standard requires that encoding of digits is contiguous, so this will work with any character encoding, including EBCDIC, Unicode and ASCII.

Some other points to add in addition to @Edward fine answer.

With some other ideas, a sample untested (todo) alternative.

The input characters should be checked to not be outside ASCII values 32 to 126. The current implementation fails with input "öMon31" because strlen returns 2 for character 'ö'.