Works pretty decently for means close to the the mean of HT (e.g., means between between 40 and 60). Takes for ever (without generating a run-time error) beyond that narrow range (roughly 28 minutes for mean =30)

etc., so that the target mean is closer to the mean of HT does not generate realistic data besides being an ad hoc solution. And yes, I would like what I call "realistic data" to have a "high" standard deviation perhaps with a number of "outliers".

The process speeds up significantly as the value of data diminishes, so maybe the better approach is to try to use recursion with smaller data values (sort of like in merge-sort)?

I would make all relevant parameters actual parameters of the function. This makes it a lot easier to test.

without executing the tests.

I would try to find a different name for the function, without too many abbreviations.

I would use a completely different approach to this.

First, note that the Poisson distribution is a positive-semidefinite distribution for integers. If we want to generate a integers in the range (0, 100) (similar to your example, but note the off-by-one error), with mean 50, We can just take a np.random.poisson(50) (which I will call P(50) from now on), ensuring to throw away all values which are larger than 100 and redraw them.

This also works when generating values in the range (0, 100) but with mean 10. Only when the mean becomes larger than the half-way point do we start getting into trouble. Suddenly we are starting to loose a larger and larger part of the tail to the upper boundary. To avoid this, we can just swap the problem around and declare the upper boundary to be zero and generate the values as high - P(high - target), so we generate how far the value is away from the boundary.

Similarly, when the lower bound is not zero, we need to shift the values upwards and generate low + P(target - low).

An implementation of this is: 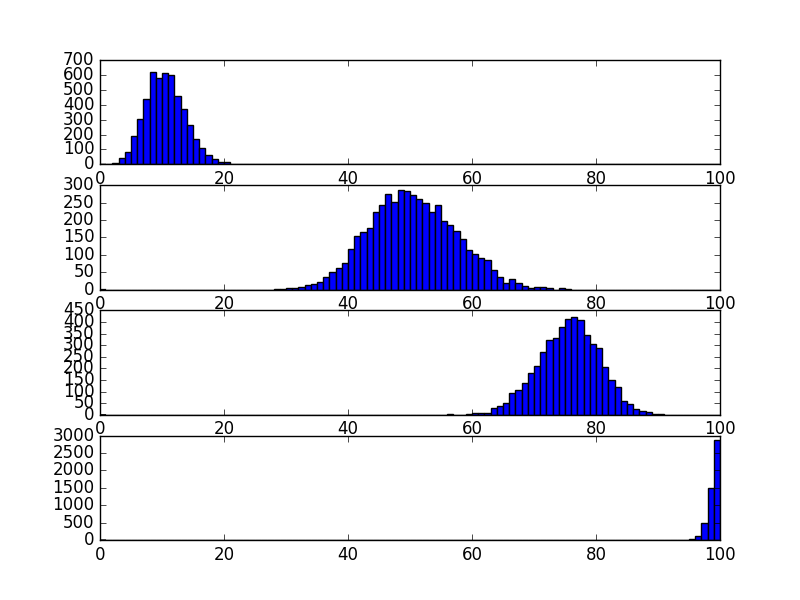 As an alternative, you could take the Beta distribution, which is only defined on the interval [0, 1], which helps us a lot here, because we don't need to take care of edge effects, we only need to shift and rescale our values. Given a mean and sigma (I took sigma to be an arbitrary value), we can derive the necessary parameters \$\alpha\$ and \$\beta\$, as given as alternative parametrization on wikipedia:

With this, I ended up with the following code: 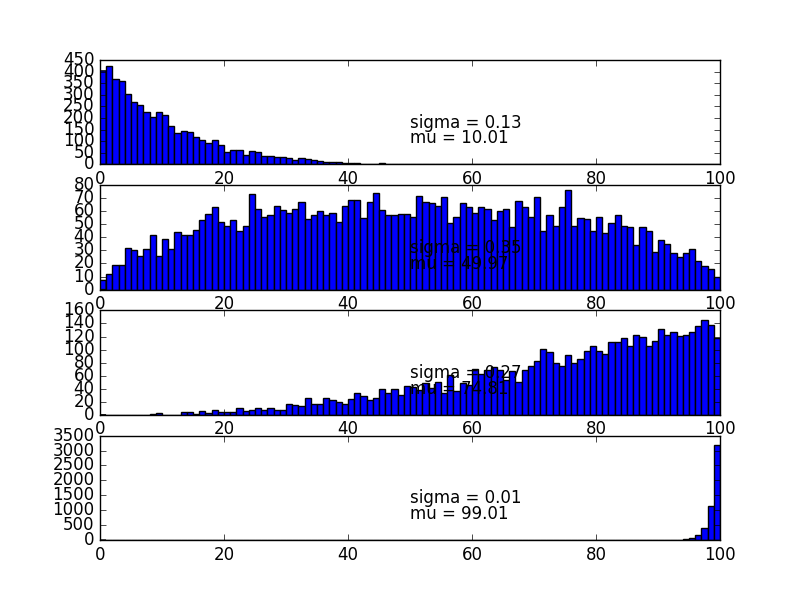 In comparison, this is what @Peilonrayz's algorithm produces for these means: 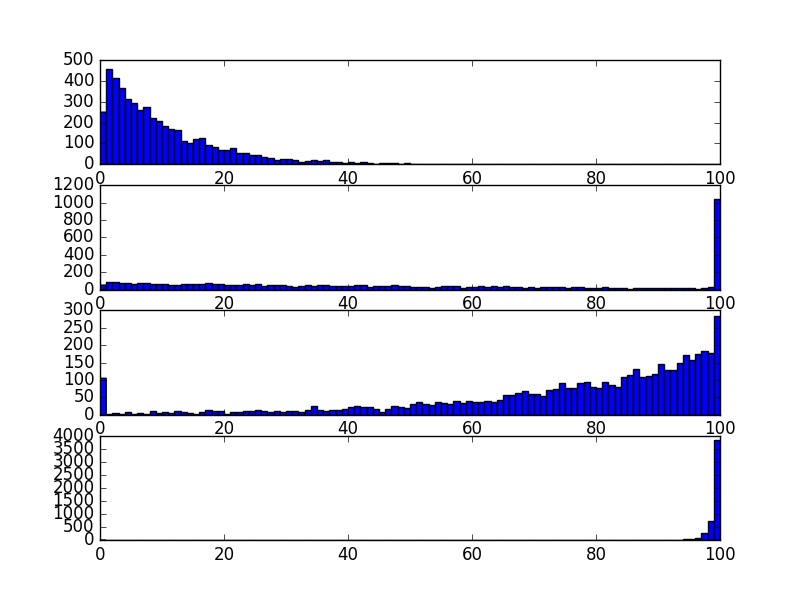 Here is the code to generate the graphs:

If you want to keep your algorithm, then you should:

Your algorithm reminds me of the infamous Bogosort. You're generating a bunch of random numbers and hoping for the best. This is clearly not going to be performant.

First off I'd recommend that you create a helper function. This is as thinking of algorithms as \$0-\text{stop}\$ with a step of \$1\$ is easier than thinking of \$\text{start}-\text{stop}\$ with a step of \$\text{step}\$. To do this you can perform a transform on the output of you function so that you multiply by the step, and add by the start. But you should take into account that some means are not possible with certain steps. Finally if you make your input work like a Python range, then it'll be familiar to other Python programmers. And so you could get a decorator like:

This allows you to define functions that only take a mean, length and stop. And so could make your code:

After this you want to look into a better way to generate these random numbers. At first I used an algorithm that generates \$n\$ random numbers that add to a number. As then we can use an algorithm documented by David Schwartz. To prove that we can use this algorithm rather than the one that you are using, we have two of the numbers in the mean equation:

And so we can quickly implement the algorithm with:

As pointed out by @Graipher this algorithm isn't very good to generate the random numbers. And so instead of using the above algorithm, you can use one that adds a random amount to each number, as long as it doesn't exceed the maximum size. To do this you can create an amount variable that you subtract from, when you generate a random number. You then want to loop through you list and pick a random number to add to the current item. The domain of this random item is \$0-\min(\text{amount}, \text{stop} - \text{item})\$. This is so that it doesn't exceed the maximum number size, and all the items add to the total we want. This can get you the code:

This has a uniform output when the \$\text{mean} = \frac{\text{stop}}{2}\$, but otherwise the beta function is much better.

Not the answer you're looking for? Browse other questions tagged python beginner random numpy statistics or ask your own question.