Generic data converter for one type of data to another

I wrote a generic data converter that takes one kind of data and converts to JSON and XML types of file. Now, it reads data from the given CSV file hotels.csv. The first line is a header which describes all field names and, follows the rules given below:

AS the project is little larger to put here entirely, I keep it in the Github and please have a look from there. I provided the structure of the project below - 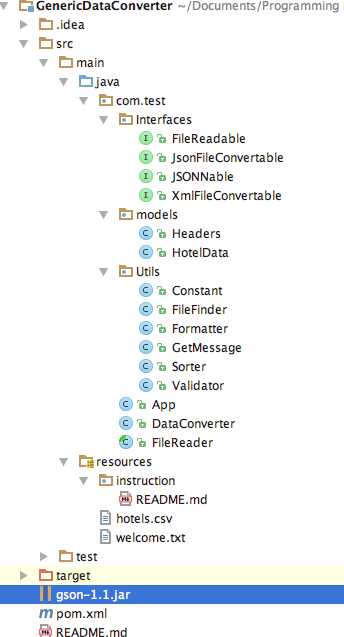 Here are some classes with importance:

How can I improve the architecture, elegance and performance (lesser priority in this context) of code ?

NOT SURE WHY YOU PREFER TO PROMPT THE USER BY 'SHOUTING' AT THEM...

You're not programming an 80s-era (70s?) console terminal program, so from a UX perspective it's better to display the prompts using the appropriate casing.

You have used a non-insignificant amount of vertical whitespace, i.e. empty lines, which tends to make scrolling through code a little harder to comprehend.

You have a huge chunk of commented code. This may be fine for a small, personal, non-versioned project, but once you factor in a code repository, it's usually suggested not to leave commented code inside the codebase. This is because old/unused code can be easily reverted through the history, or using the appropriate branching features.

You didn't show what your Constant class is, but you shouldn't be assigning values to it for two reasons:

Your current approach of exception handling looks like it's just the default option that any good ol' IDE provides. You should be more careful though, for example when the program fails to read a file.

The current implementation simply prints the exception stack trace at the constructor of FileReader, leaving all its variables as the default null values, which makes it easy for NullPointerException errors to be thrown to users of the object.

A FileReader object that fails to read a file should instead propagate the error to the user.

@h.j.k. has provided a great answer on programming style.

Disclaimer: I use strong words. Don't be discouraged, we're here to get better! I can be yelled at if I learn something in the process.

On the matter of style, I can just add that you're doing a lot of work on your constructors, which is considered bad practice. Additionally, you're doing work on the constructor that is performed in an overridable method. This is quite bad, as the method may be overrided in a way that breaks the object, or repurpose it, etc.

Now I've said this, I will focus on code structure.

Run away from side-effect methods

All your interfaces force their implementation to perform actions with side-effects. Their single methods all look like : void doSomethingInternally(/*No Args!*/) throws SomeException. I see 4 mistakes in this kind of declaration for an object of those types:

Generally, I would declare the following interfaces:

The FileWriter can then be the standard JDK one, and will write whatever String you throw at it.

To come up with this is simple: a class only does what it advertises. A Reader reads, but does not store. A Converter converts, but does not read, nor store. A Writer does not convert. One class is used to store data (HotelData, you don't need Headers btw), this is used as rich pivot format for data handling.

Then your classes are all reusable. The power comes from combining these classes in higher-order methods, not inheriting to make God-objects that implement everything.

It is good to have a package for grouping business classes! Well thought.

It is a good class, like a Bean. It may benefit from a Builder class.

The method hotelsToJSON is a helper for Conversion. It should be in the JsonConverter class.

Making a Hotel JSONable is a design decision. Be careful, if the hotel implements too many XXXable, it might become to complex. Since you have a JSONConverter (which is entirely reasonable since HotelData exposes getters for everything - which is good), then maybe you don't need this at all. Suppose you suddently need to serialize this class to store it in DB, to disc or pass it over JMS. If its JSON description changes (because the JSON API / format changed) then you need to change the class, and suddently deserializing is becoming a pain. But it shouldn't because a hotel is still the same business thing! So I would remove these methods.

DataConverter is rightly named. It converts everything. The problem is it does too much... What good is it splitting functions in interfaces if only one object implements all? Make a JsonConverter, etc.

Haven't looked at App much, but try to take out everything from main, and extract as many methods as possible.

If you only retain one thing from this wall of text:

There are only two hard things in Computer Science: cache invalidation and naming things.

You have a big problem with naming. This is the one thing to work on! Once naming is correct, everything becomes easy...

Not the answer you're looking for? Browse other questions tagged java json xml or ask your own question.