Everything works fine and takes just 3 seconds to display the result. But then I need to filter what PolicyNumbers to work with, basically I need to get rid of PolicyNumber's that dont have @ClassCode. So for that in the first part of the query I placed WHERE clause:

The CASE statement will generate 1 for the ClassCode that is present in the list, else NULL will be generated. Now the count aggregate will count of 1 for each PolicyNumber. By setting = 0 we can make sure the PolicyNumber does not have any ClassCode present in the given list.

After that query spinning forever, becase @ClassCode can have more that 200 ClassCodes in SSRS report.

Interesting things is that both those statements works fine separately. But when I use them together (which is placed that WHERE clause in cte policy_data then execution takes forever.

Is any way to tell engine to do the first part of the query, and then calculate and break down Earnings for only those policies that have been filtered?

What would be the best way to improve the performance? I created non-clustered index on PolicyNumber on both tables. But still nothing.

Like I said, seems to me that if SQL Engine would process the first part(PolicyNumber filtering) that takes 3 seconds, and then do the second part (calculation for those PolicyNumber's) that takes another 3 seconds - that would be awesome. 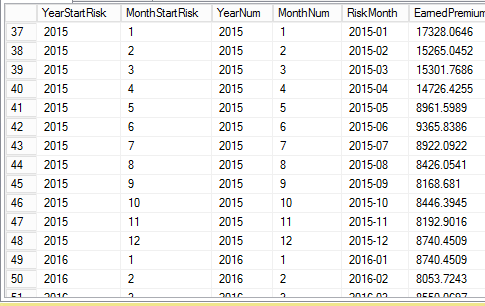 Like I said, seems to me that if SQL Engine would process the first part(PolicyNumber filtering) that takes 3 seconds, and then do the second part (calculation for those PolicyNumber's) that takes another 3 seconds - that would be awesome.

Ultimately, T-SQL is a declarative language, meaning you tell it what you want, and it figures out how to do it. It does so by using a lot of behind-the-scenes information to estimate what the most efficient way of doing it will be, and then does it. If it estimated incorrectly, then you get poor performance. There isn't a waya to get it to pick a different plan explicitly; you need to make sure it can pick the best plan for itself.

In your case, it is picking nested loops for your joins to PlazaInsuranceWPDataSet because it thinks that very few (probably 1b) rows are going to actually join. Nested loops are the fastest way to join very small amounts of unsorted data; they require no startup cost, memory, or sorting. Nested loops start to perform very, very poorly if there is a decent amount of data there.

So why would the optimizer think that no rows are going to come out of them? Lets look at the joins you do:

Your entire query uses questionable methodology to filter and join data that makes it really, really hard for SQL Server to figure out how many rows are going to come out of a given operator. Eventually, SQL Server will get so confused that it will assume that nothing is going to join, and pick nested loops for everything. If SQL Server is wrong (as it appears to be) then it is going to run very, very slowly.

Specifically, SQL Server maintains cardinality estimates on most tables, indices, and columns in the database. This cardinality estimate tells you things about the approximate distribution of data in the table, and it can use that to determine what kind of plan is needed. For example, assume you have a query like this:

This seems like a very straightforward query, right? If SQL Server doesn't think there are rows where A.SurrogateKey > 10000000 then it might first filter A, then nested-loop join to B to avoid any performance issues. This would be bad if it was wrong, but if it is right then it has picked a great plan.

The problem with your query is that your predicates rely on things that SQL Server has no estimate for - functions.

SQL Server knows the distribution of values in tblClassCodesPlazaCommercial.ClassCode, but not of CASE WHEN ClassCode NOT IN ( @ClassCode ) THEN 1 END. Similarly, it doesn't know the distribution of CAST( PlazaInsuranceWPDataSet.PolicyEffectiveDate AS date). It is very important to use SARGable expressions in your query; joining on or filtering on non-sargable expressions will generally lead to poor performance

So how do we resolve this? There are a few low-hanging fruit we can grab immediately:

After that it gets a bit trickier.

Your policy_data CTE needs to be cleaned up. Right now your HAVING clause is going to be pretty difficult for the optimizer to clean up. What you actually wanted was to find all PolicyNumbers that have only valid ClassCodes, correct? Using NOT EXISTS and a normal WHERE clause still gets you the semi-join, but SARGably.

Now, because you later join on PolicyEffectiveDate and PolicyExpirationDate, you really should try to either join on them using the same data-type, or store them as dates in the table. If you can't change how they're stored, a computed columnc may be appropriate.

We've already talked about the policy_dates CTE; the cleanups mentioend above should help this one a lot.

For the final query, you'll want to not join on YEAR and MONTH. One option here would be to materialize policy_dates into a temp table and then join on that, and include the calculated YEAR and MONTH in that table. Alternatively, if you just join from tblCalendar to the StartRiskMonth as a date, that will likely work, and then you can use a DISTINCT or GROUP BY to clean up the granularity.

Speaking of GROUP BY, using functions in there is usually a no-no as well; now you can't use any existing sorts in the data (for example, if you have an index that sorts by the first 3 columns it can't use that). I also suspect you don't need to actually group by that many things; using an aggregate over a value that doesn't change granularity will generally perform better than including it in the GROUP BY.

Suppose this table kept track of people's ages by having a row per year of their life. Further suppose that everyone has a unique first and last name, and that neither change (obviously not real-world data, but its fine as an example). It would perform better if we did this:

This will perform better because the GROUP BY operation sorts data in the background; sorting on a single column is cheaper than the other, and we know that based on our real data the MAX doesn't change anything about the results.

I think this does what you are looking for (more efficiently)

Not the answer you're looking for? Browse other questions tagged performance sql sql-server t-sql join or ask your own question.

7
Tame this Beast: TSQL Unpivot
8
Should a year and month be stored as separate fields or as a date?
12
LW, MTD, STD, YTD Sales… all in line and looking pretty
3
Query using cross join or inner join
3
Selecting product variants that satisfy all option criteria
3
Speed up SQL query
6
Zombie killers ranking
4
A fast generator of palindrome dates in chronological order
3
all appointment based on interval distance