Here is the problem description from hackerearth.com:

Rohan loves Palindromes. Palindrome is a string that read same forward and backward. For example abba is a palindrome while abca is not.

Rohan is forming a palindrome of length lesser than or equal to \$n\$, with first \$k\$ characters of lowercase English letters. He needs your help to find out the number of possible palindromes.

Output Format: Output a single integer, which is answer to the problem

I tried making it and it was working fine for some small input but in case of large input its saying time limit exceeded. I think my code running time is \$O(n^2)\$, but I am not sure.

I am interested in knowing that where I am doing wrong with my code and how can I fix this. Also what should I do at first when I face these kind of problem whenever I have to deal with long input because every time I see any time limit error I am not able to fix it.

what should I do at first when I face this kind of problem?

This is a good question! When I studied computing at university I was taught the following general technique:

As you get better at carrying out these steps, some of them will become second nature to you and so you won't have to go through them all in such detail as I do below. But when you're starting out, or unsure about the approach to take it's good practice to be thorough.

In this problem the mathematical approach looks like the way to go. Take a look at the analysis in §2.1 above. You can see that I was able to get quick estimates for the size of z and sum. But with a bit more care, could we work out the exact values for these variables?

But we're not done! The first thing to do is to check that this is right, as it would have been easy to make a mistake in the mathematics. So let's check this function against the original:

But is it fast enough? Measurements suggest that it is faster that the first version of the code, but not fast enough to get the answer for \$n=10^9\$ in reasonable time:

We had better go through the analysis again for the new program and estimate the runtime. This time I'll omit the detailed analysis and cut straight to the point: we have some arithmetic operations here, on numbers that get as big as \$k^{{n + 1 \over 2}+1}\$, that is, with roughly \$n \log k\$ digits. We expect additions and subtractions on numbers of this size to take time roughly proportional to \$n \log k\$, and similarly for multiplication and division by small numbers. But there are also two exponentations: how long do these take? Well, I don't know about you, but I'm not sure of the runtime complexity of Python's ** operator. So there are two ways to go here: we could dive into the details of Python's exponentiation algorithm (yuck), or we could just assume that computing \$k^m\$ takes time proportional to some power of \$n \log k\$, say \$1 + b\$, and work out the value of \$b\$ by fitting the measurements to the equation \$t = an^{1+b}\$. Here's the best fit: 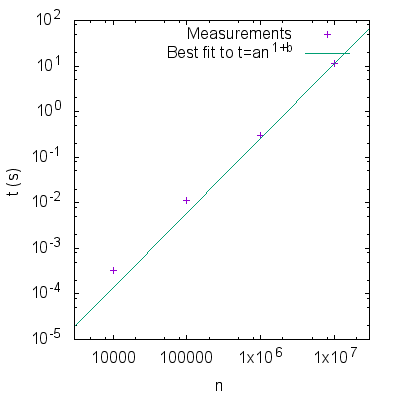 So in the worst case (\$n = 10^9\$) the new algorithm is going to take about 5 hours. This is better than the 4 years of the original algorithm but is still likely to be unacceptable!

So we have to find another improvement. This is looking tricky: where can that come from? Well, the key observation is that the final result has to be returned modulo \$10^9+7\$, and so it can never have more than ten digits. And yet the intermediate values that we are computing are huge: in the worst case, \$k^m\$ has hundreds of millions of digits. This is a terrible waste of computation if we are going to compute a number with at most ten digits. So is there a way that we can do all the arithmetic modulo \$10^9+7\$ and so keep the intermediate values small?

How is that going to work? Modular addition, subtraction and multiplication are easy — we just add, subtract or multiply normally and then take the modulus later. For efficient modular exponentiation we can use the built-in function pow.

That leads to this implementation:

Again, we must check that this is correct:

and see how bad the worst case is:

So if I get you right.

You first input the numbers and convert them from string. Set the sum to 0, z to b.

But This is a combinatoric problem. Why not treat it as such? If we formalize the question, it becomes:

Not the answer you're looking for? Browse other questions tagged python programming-challenge python-2.x time-limit-exceeded palindrome or ask your own question.