This previous iteration of this question can be found here

A utility class to handle the state of the Application object.

How can I make it even better?

I'm considering changing the name to ExcelApplicationState to make it clearer that it's a state-persistence object. Thoughts?

Kudos for using Rubberduck tests - I'm completely and utterly biased (I wrote quite a big chunk of that part of Rubberduck), but IMO there's no cleaner/leaner unit testing framework for VBA code.

If you're not going to have any code in the @TestInitialize/@TestCleanup methods, remove them: that will remove a bit of overhead and make the tests complete faster - if Rubberduck doesn't see any @TestInitialize method in a @TestModule, it will not run it. Conversely, if Rubberduck finds such methods, it will call them before and after every single test.

The OriginalSettings are a module-scope field, but it's only ever referred to in @ModuleInitialize and @ModuleCleanup methods... i.e. it's useless.

If you had @TestInitialize calling OriginalSettings.Restore, then you could have every single test method use it - but since it's your System Under Test (SUT), it's probably a much better idea to have each test work with its own instance. Hence, I'd just remove the field, and delete any dead code and empty setup/teardown methods.

The Rubberduck.AssertClass has a rich API that exposes various methods that can simplify your assertions.

Assert.IsTrue works with a Boolean expression, and fails if that expression evaluates to False. By giving it Application.ScreenUpdating = True, you're basically doing this:

Which you'll agree is redundant =)

Use Assert.IsTrue and Assert.IsFalse to evaluate Boolean expressions accordingly, so instead of these:

You would have these:

And you could even give it an optional message parameter, that gets displayed in the test explorer when the assertion fails:

The AssertClass.AreEqual method fails an assertion when two given values aren't equal. It could have been used here:

Like this - always the expected value first, then the actual:

There's also Assert.AreNotEqual to assert the opposite.

Assert.AreEqual works for values. To determine if two objects are the same reference, there's the Assert.AreSame method, which you could have used here:

Much simpler, no? The API gives you Assert.AreNotSame to assert the opposite.

There's also Assert.IsNothing and Assert.IsNotNothing which you can use to test whether an object reference is set or not (but there's no such assertion in your code, so I'm just merely mentioning it for the sake of completion).

Every test creates a new instance of the class under test, which is excellent. However the class implements a Class_Initialize handler that modifies its internal state, and you have a test for that which is awesome:

However every single test that uses the global Application instance is implicitly assuming that the GivenDefaultObjectTargetHostApplication test passes. Before you can do this:

You need to assert that:

That way if you make a change and GivenDefaultObjectTargetHostApplication starts failing, you're not going to have 13 failing tests: you'll have 1 failing and 12 inconclusive. And the name of the failing test should be enough to tell you exactly what assumption your modification broke.

I think GivenDefaultObjectTargetHostApplication could use a more meaningful name. How about GivenNewInstance_TargetApplicationIsHostAppInstance? Normally I avoid underscores in method names, but test method names have their own guidelines: I like GivenFooThenBar, but your identifiers are GivenFooBar - seems an underscore helps make more sense out of the name: GivenFoo_Bar actually makes the underscore read like an implicit "then".

Naming is hard. Naming test methods is even harder: you want to be able to read them in the test explorer and immediately know what the thing is doing and how it responds to given input. 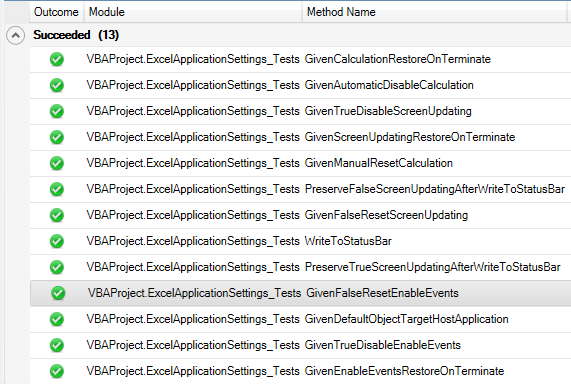 With a name like GivenStatusBarMessage_SetsStatusBarTextAsSpecified, there's not really a need for any comment to explain what that test is about.

I think you have an opportunity for a @TestCleanup method here:

Instead of "resetting" Application's state, you could use @TestCleanup and/or @TestInitialize methods to configure/reset the state of Application properties, so that individual test methods don't need to be worried about correctly tearing down.

Not the answer you're looking for? Browse other questions tagged unit-testing vba excel rubberduck state or ask your own question.