Given a polygon with weighted vertices, calculate a value for an interior point

I want to be able to find out the value of a point inside a polygon if I have assigned weights to its vertices.

In the figure below, some weights have been applied to the green dots. For some red interior point, I need to calculate 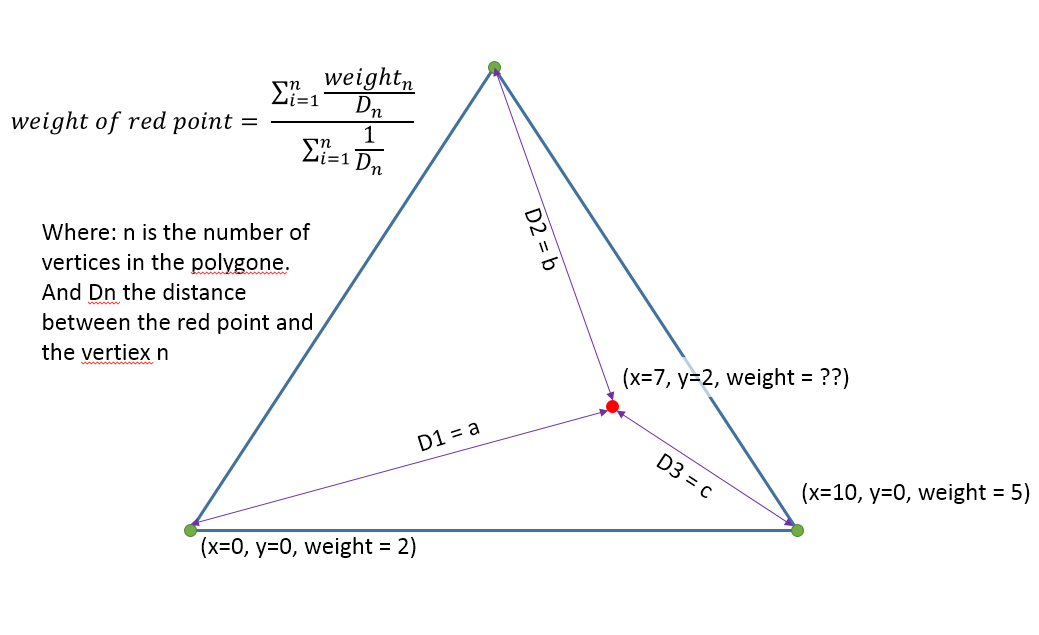 I have use the inverse of the distance from the point to a vertex as my correction factor.

This is my code so far to get the weighted value at one red point:

Note that my polygon can be irregular. Also, not all the vertices might have a weight, in which case the vertex is skipped for the calculation: in the example above it would mean that the value of the weight would only be calculated using two vertices rather than three.

And this is a test code sample:

Any suggestion on improving this code would be welcome!

Browse other questions tagged python algorithm computational-geometry or ask your own question.

2
Applying Dijkastra's algorithm on a graph of five nodes
10
Finding the nearest polygon
4
Calculating the distance squared between all vertex-pairs of a number of 2D polygons
5
Perimeter of a polygon given its vertices
3
Maximum clique problem: fast heuristic
3
Replacing nodal values in a mesh with >1e6 inputs selectively using a polygon
8
Given a collection of points on a 2D plane, find the pair that is closest to each other
4
Removing undesired points from a mesh
10
Implementation of Dijkstra's algorithm in Python