Given a target folder, and a list of target sub-strings, determine if the folder (or any of its' sub-folders) has a filename which contains any of the target substrings.

N.B. This class uses Early-Binding and requires a reference to Microsoft Scripting Runtime

Essentially all of the work is done by RecurseFolderForMatch, which works thus:

'/ Search all filenames in the folder for a substring match
'/ If there is no match, iterate sub-folders
'/ For each subfolder, call RecurseFolderForMatch
'/ Short-Circuit if This.MatchFound gets set to True

Your example usage is needlessly complicated:

There's no need to even declare a local variable, just have the With block hold the reference instead:

I don't like the CLS prefix and underscores in the class' name - I don't see a reason not to just call it FolderSearch:

The VBE's project explorer already regroups modules by type, which means everything under the "Class Modules" folder will have that CLS prefix - what's the use then?

Whenever referring to early-bound types, it's usually a good idea to qualify them with the library they're from - e.g. ADODB.Recordset, Scripting.Dictionary, etc.

...unless you have Rubberduck's contextual status bar to spoil you with immediate knowledge of what's coming from where:

Otherwise all you get is this when you try Shift+F2 / "go to definition": 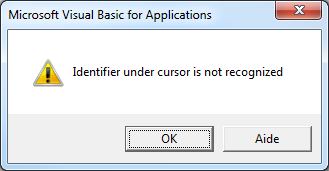 And only then you resort to the object browser to search for that Folder type in all referenced libraries.

Nitpick: I think the API / exposed members are too verbose, I would change SearchFolderForMatch to simply Search, or even Execute.

That's a dependency on an outside procedure, and the class itself shouldn't be responsible for handling such errors - that error should be bubbled up and handled by the client code, because it's not an error that the object is supposed to know how to handle - the object's job is to search folders, not print stuff to the debug output (or does that method log stuff in a database? or in a text file? or does it display a MsgBox?). Consider raising a custom error there.

Function NameContainsAnyTargetSubstring returns an implicit Variant; the signature should end with As Boolean.

It's also Public, but you're listing it as a private method in the OP. Glitch?

Avoid clashing names - you have MatchFound a member of the SearchProperties UDT already, so consider MatchFound taken as a public member's name. I'd go with isFound, or simply result here.

It's a bit off-putting and inconsistent that the public property backed by that MatchFound UDT member is called FoundMatch, given how every other property has the exact same name as its backing UDT member: 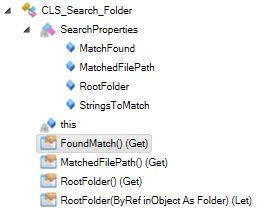 There's no reason for = True here:

There are several spots where you have opted for an If...End If block when an If...Then statement would have been just fine - for example:

A couple things I noticed - all of your public methods rely on this.StringsToMatch being initialized. You're using Is Nothing as basically a proxy for .Count = 0. Since the behavior of the class depends on having an initialized container, just create it once in Class_Initialize:

Then you can replace ClearTargetSubstrings with the much more natural...

Along those same lines, I've always disliked the Scripting.Dictionary behavior of adding an item as a side-effect of calling .Item(foo) = bar if foo doesn't exist. In my mind this should be an error, so it looks like an error at first glance. Just because Microsoft made a bad implementation decision doesn't mean you have to rely on their poor implementation at the expense of your readability. If you always have a .StringsToMatch hanging around, you can make AddTargetSubstring a lot clearer as to what it is actually doing:

Note that this also allows you to add an additional dereference level to your With block.

Note above that I set the key, but left the item as vbNull. If the key and the item are always the same, there isn't any reason to store 2 copies of it. You are basically using the Scripting.Dictionary as a simple hashset, so just use the part .Keys() that actually is the hashset. Save the memory and hassle of actually storing copies as the .Item.

I'll diverge a bit from @Mat'sMug's recommendation to have errors bubble up to the calling code. The class is simple enough that I wouldn't even be raising errors about its state. If you require that this.RootFolder is set, make the property read-only and make a Scripting.Folder a required parameter of SearchFolderForMatch instead. If you don't have any sub-strings to search, pick a default behavior (like returning vbNullString for MatchedFilePath or matching any file) and do that instead of raising an error. That allows the calling code much more flexibility and removes the requirement for the caller to have to establish a valid object state before using certain (in this case 1) methods.

Short nit-pick break (and this is entirely a personal style preference) - I find the "out-dented" GoTo labels distracting. The vast, vast majority of code that I see has them simply pinned to the left margin where the VBE puts them. Having them at a different indentation level makes think that they are acting as a closure, so it actually takes a bit of mental effort for me when I see this:

The fact that they all start with End makes it even worse. My brain does something like End Sub, End Function, EndCheck, ...WTF?

Finally, you have a pretty decent performance opportunity in NameContainsAnyTargetSubstring. You are comparing every single file to the same set of keys, so I'd consider converting it to just build a RegExp pattern and using that instead. Just getting rid of files * substrings extraneous string casts with the line stringToFind = CStr(key) is worth it alone.

I'd do something more like this. Make NameContainsAnyTargetSubstring a simple wrapper function (mainly to avoid having to recreate the regex pattern repeatedly):

You can probably just leave the VBScript_RegExp_55 off the declaration of RegExp - pedantic mode was on solely to avoid the appearance of hypocracy.

Not the answer you're looking for? Browse other questions tagged vba file-system or ask your own question.