Hex encoding and decoding of ASCII strings in VBA

I needed to convert some Ascii text to binary in Hex format 0x00FF....

I've written an EncodeHex and a DecodeHex function to do the conversion.

I need to use this in Excel, so I'm using CVErr(xlErrValue) to return errors, but this could maybe benefit from being more generic.

I think you have an opportunity for using Application.Caller in that error-handling subroutine, and make the function behave differently when it's used as a UDF vs. when it's called from VBA code.

Instead of GoTo-jumping when there's an invalid argument to early-return an Excel error value that's only really useful when the function is used as a UDF (and confusing when it's called from VBA code), you could be raising an actual meaningful error (which would still be jumping to the DecodeError label).

First, because we're raising an error in several places, I'd make a little utility procedure:

And then the error-handling subroutine could do this:

That way the calling code can handle a runtime error 5 (aka invalid procedure call or argument) with a useful description: 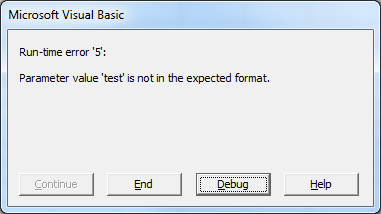 And now you have a function that's just as friendly to use as a UDF as it is in plain VBA code.

This doesn't strike me as intuitive:

"Is value a multiple of X" is usually written as:

That way you're not assuming what the remainder might be - of course here it's either 1 or 0, but the point is that the way the comparison is written in foo Mod bar {comparison} never has to change, regardless of what the value of bar is.

I'll second @Zak 's suggestion on clearer function names, although my naming preference is for AsciiToHexString and HexStringToAscii.

A couple other things I noticed:

I prefer variables to begin with lowercase letters and a Sub or Function to start with an uppercase letter. I've seen this convention used consistently on SO, and (for me) it makes for clearer reading.

In the other function, your error handling is not consistent. At the very least you should add a GoTo SafeExit at the end of your DecodeError: section. This is good practice to force a single return point from your function. Alternatively, you can skip that error handling altogether with If statements:

Your second function should explicitly state its return value. In your case, it should return Variant since the value could be CVErr or a valid string.

HexEncode and HexDecode aren't bad, but they could be more intuitive.

I see them, I know that they're working with hex encoding, but I'm still going to have to track these functions down to find out exactly how they're structured.

IMO, these would be even better function names:

Short, Simple, Descriptive and completely unambiguous.
It means we can then write code like this:

Which is just so much easier to read and understand.

Hex to String - Preserving the leading 0

Hmm, I think I can use a bit trick to make the Hex conversion more efficient.

While I have implemented a hexPrefix to allow for various hex syntax, I'm forcing the hex string to have adjacent characters, but some consumers of the function might want some more flexibility. If I added an optional parameter Optional HexCharDelimiter As String = vbNullString, then I could do things like:

Providing flexibility in the return type

But what about return-type flexibility and/or longer strings that need encoding? The function forces a string on the consumer of the function, but returning an array of hex encoded characters might be more useful, and if a user does want a string, then a string-returning function just joins the results of the array returning function.

That would allow me to use the array to build multi-line results. For example, like a hex editor view: