Displaying game progress in a JApplet

I gave myself a small project to work on and at first I wanted to use the MVC approach, but I got confused as to which part of my code should go into which class. I did some research and still don't quite understand how I should go about it.

This is the GUI I made: 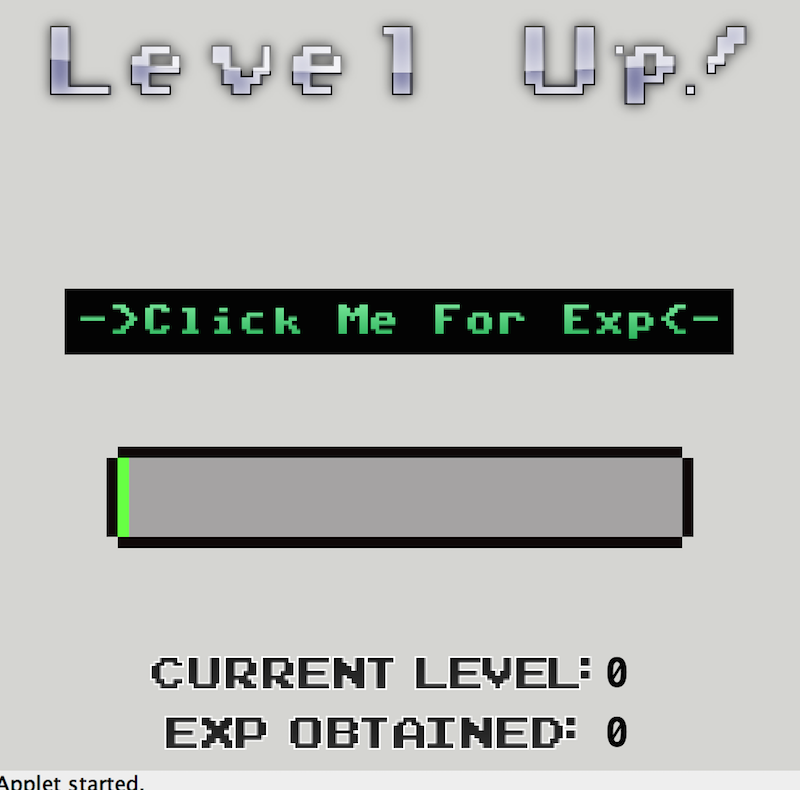 I created the View class:

And I ended up just doing the rest in the Model class:

Once the button is clicked experience is added and the experience bar changes as it gets closer to the next level up. Once you level up, the background changes and the bar is reset to its original image. (Up to level 10).

I realized I was doing this all wrong and the best way to go about it was to get my code looked at. Also, I'm confused as to which variables should be made private?

So, what I'm asking is for an example of which part of my code should go into which class, considering I made a controller class as well. Also, an example of using private variables within my code. As well as any more problems, I need all the constructive criticism I can get.

As a beginner, I want to learn better practices as soon as I can!

Some short note without really reading into the source.

In MVC usually the Model is independent of View and Controller.

So your public class LevelUpModel extends LevelUpView implements ActionListener looks like mixing together Model and View class, supplementing functionality of Controller too.

Some general notes how I would split these:

I prefer to couple my views tightly with models, so the init/update methods take reference to actual model class (ie. View has to import Model).

It's not storing the model reference, only using it's API to init/update it's current state and forgetting about it, so you can any time change the View to display current state of different instance of model.

With the above model, and intent to have special effect for "level up" event, I would probably design API as:

Which would use getters to set up the exp bar, exp number display, level number display, set up correct colours based on those, and finally to start some effect when leveledUp would be true (having that "effect" as an stand-alone app entity, capable to handle it's own life cycle, like some animation of fire works or sound player playing ding once).

In case of some more complex level-up effect I would consider either making state of it part of original model, or having separate LevelUpEffectModel to hold state of effect, with it's own view and controller.

Finally controller is the glue of view and model, but should not contain any biz-logic, or low-level view updating commands.

So in this example it would do probably things like:

So things like setIcon belongs to View.update, ++exp; belong to Model.addExperience, poking model/view in reaction to the click event belongs to Controller (although it shouldn't contain the logic itself, ie deciding whether level up happened or not, that's responsibility of Model).

Model contains every important state of the world, so the view can be reconstructed out of it (above I'm breaking it a bit by that "leveledUp" value, writing it now, I would probably move it inside Model, and create one more getter boolean didLevelUp(); being updated by last addExp call) - from scratch.

View contains everything what is displayed, for example it contains the string representation of experience (Model doesn't have to, as it can be constructed from the int in Model, by "formatter" in View). And also contains logic, how to display it.

Controller should only "connect the dots" and control the execution flow, when what should be called/updated.

The Model/View relation - how I like it - can be demonstrated on this classic:

Consider having blog application, so for each article you have date+time of publishing the article.

Then Model should contain UTC timestamp value (can be unix timestamp, if you need only dates since 1970 onward).

And View will do all the formatting magic, ie showing "5 seconds ago" for fresh article, or "previous millennium" for some really old article, also converting the date/time to local time zone of user (source data stored on server being in UTC, time zone agnostic).

Usually when you can UnitTest all model API easily in pure JUnit (without mocking JApplet environment or providing fake UI/display), you are on the right track. There's sometimes need to provide some complex back-end functionality, like database, or server API, for model classes, but it should be still quite easy to mock only a bit of it, and having model exercised to do everything it should.

Testing View classes is quite often much more difficult, or straight counter-productive, if you change the design a lot, so your tests would have to be updated often.

Why I'm talking about tests so much, while you didn't even ask. Because once you do the MVC properly, unit testing "model" part becomes so easy, that it's low hanging fruit and should be probably your next topic to try out, after you get more comfortable with MVC patterns. :)

Not the answer you're looking for? Browse other questions tagged java beginner game mvc swing or ask your own question.

36
Memory with a twist