Writing to many cells from many controls' respective value

I have this program on Excel VBA, that implements a userform in order to simplify input and to create control charts from the data input analyze the data and send emails if certain conditions are met.

My problem is that everything works properly but after running line by line I noticed that when filling up the corresponding cells in excel with the user input on the userform the macro takes long to execute each line.

I am wondering if any of you have a different method of doing this that would reduce the time it takes to run through all these lines.

Like I said, it works but it takes long to finish. Essentially this is what is consuming time. I don't know what to implement to make it run faster. Any ideas are welcome.

The first thing to do is to switch off calculation, sheet events and screen updating before you write anything to a worksheet, and restore it when you're done: that way you won't have Excel try to re-calculate the entire workbook whenever you write to a cell.

Next, name things, starting with the "Data" sheet. Select the worksheet in the Project Explorer (Ctrl+R), then bring up the Properties toolwindow (F4) and type DataSheet under the sheet's (name) property.

Then you can do this:

In the form's designer (F7), give each control a meaningful name. For example ComboBox1 contains a UPC code, so it should be named SelectedUPC.

The problem with this is that you already have tons of code referring to these controls, and renaming ComboBox1 to SelectUPC would break your code, because ComboBox1 would be left referring to nothing.

You'll need tools to do this cleanly. Fortunately Rubberduck can help with this refactoring: 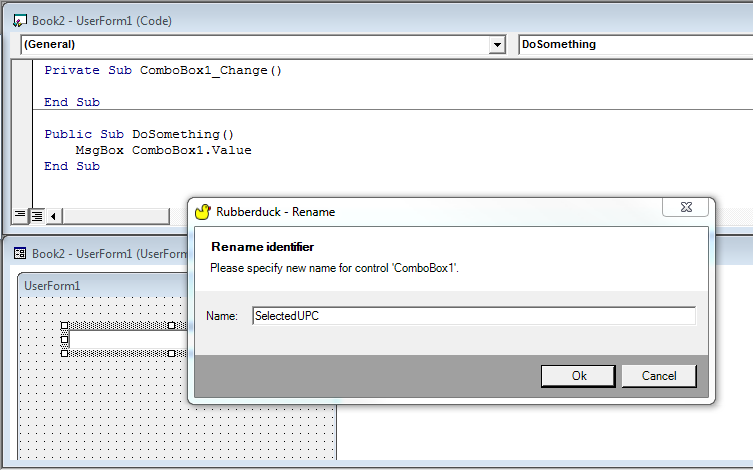 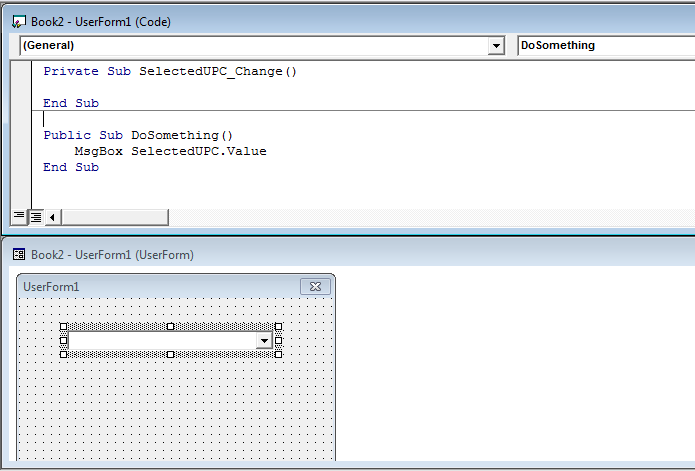 Rubberduck renames the associated event handler(s) and in-code identifier references for you - so there's no excuse for having meaningless identifiers anywhere anymore.

Speaking of naming, it's not clear at all what moRow means to be doing, nor who is calling that function, or even why it needs to be a Function.

Procedures that don't return a value should be Sub procedures; a Sub procedure executes a sequence of operations; a Function procedure computes a value and returns it to the caller.

Also, module members in VBA are implicitly Public, which means completeData (which should be CompleteData to be PascalCase like all other VBA procedures) is a public member of that UserForm.

I'd strongly recommend reading up on VBA UserForm best practices, and restructure your code so that the form doesn't "run the show": the form should be there only to provide the rest of the code with user input, not to actually perform the worksheet manipulations - a form's code-behind should only be concerned about the form and its controls; a form that knows about a worksheet, plainly knows (and does) too many things.

I'd also suggest you define an enum to name each column of your "Data" sheet, so instead of this:

You would have that:

All that's needed is a simple declaration:

That makes it much easier to read the rest of the code, and seeing DataSheetColumns.UPC being assigned to SelectedClock.Value looks much more wrong than if it's column 44 being assigned: making wrong code look wrong is even more important than writing code that "works".

You are writing to a lot of cells one at a time, which can be slow. Your output doesn't go into a single block of cells, which is too bad, but you can still make it faster by building an array wherever possible and dumping this array into the sheet in one shot.

For example, this block

Do this wherever there are blocks of output.

At the same time, follow the suggestions to turn off screen updating and automatic calculations.

2
Trimming whitespace in Excel cells
7
Interpolating data of multiple trains
3
Eliminating empty spreadsheet cells from a range
3
Copy and paste formatting is slow using VBA
8
Worksheet that lists a person's name
2
Show all full/partial search matches in the first worksheet from other worksheets
3
Web scraping data from US postal zip codes
2
Excel VBA code that writes to a Table - much slower than writing to a simple range
5
Can my excel to excel data copy code with some with data manipulation be more efficient?