Drawing a planetary system in Pygame

I am new to programming and mostly self-taught by following a few MOOCs and doing little projects. I have reached the point where I am trying to develop more complicated programs (numerical models at work and games at home) and I would like to be able to give a structure to my programs to enhance readability.

I am following an Edx course called Systematic Program Design which offers methods on how to design functions, data and world in a consistent manner.

However, I have come to notice that the method seems to work mostly with functional programs rather than the object-oriented(ish) code I tend to write (especially for games). This course made me aware that my code was full of methods with almost exclusively side effects changing attributes. Which makes it hard to follow the method and makes the code look really chunky. I was wondering if anyone knows of a course/book on how to increase readability of OO code. I use Python 2.7.1.

As I said, I am self-taught, so I apologies if the answer seems trivial to some of you who have done CS.

The github link to my game is Far and Away v1

And this is the picture of my 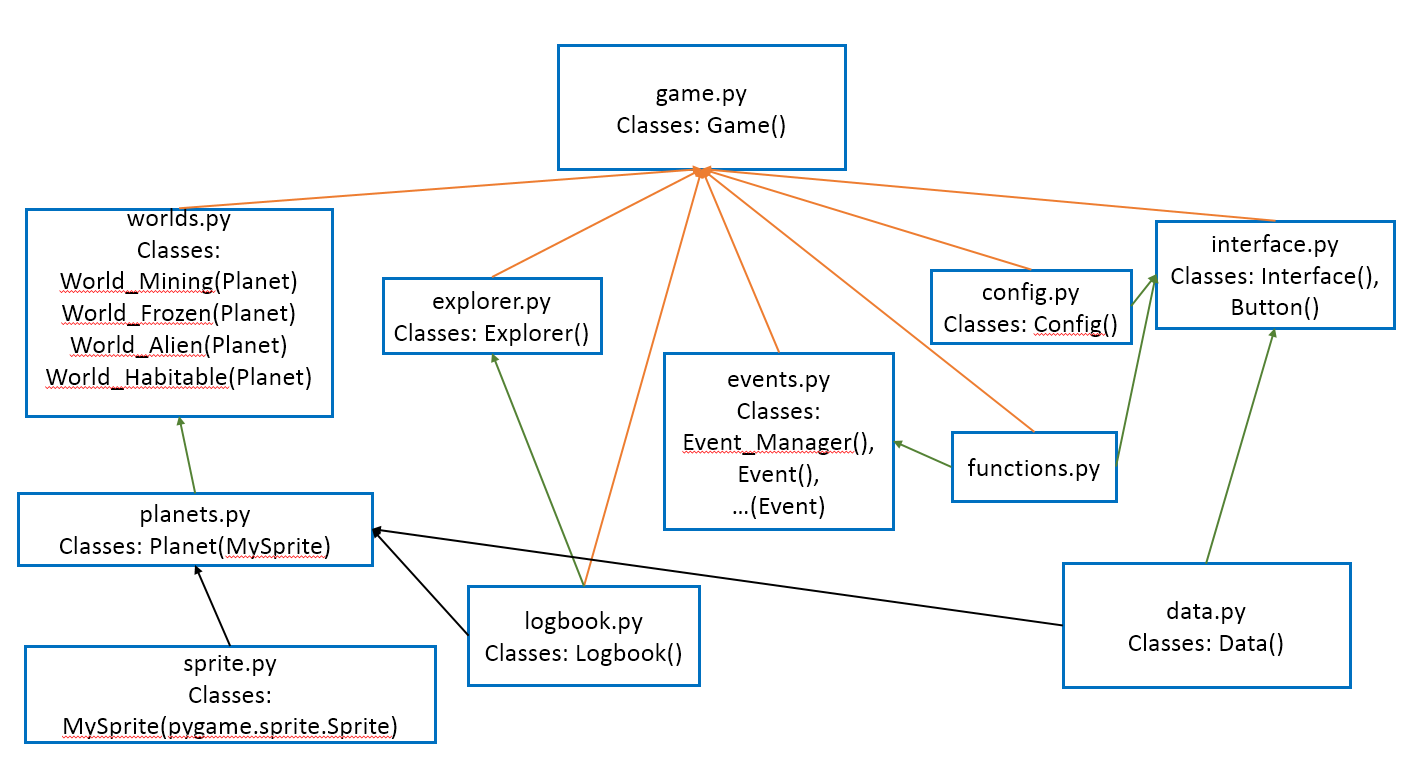 . The idea is that every object in the game has a game attribute linked to the Game() object which I use as a waypoint to access all objects in my game whilst keeping them in separate files.

To give you an example of what my code looks like and why I would like to have a method to improve it, here is one method of a game I've made:

Your code is very procedural. Do this, do that, do another thing. There's nothing inherently wrong with this, but the only OOP in the code you've shown is that of pygame itself. There's a little bit hinted at by the game and player objects, and perhaps the logbook dictionary, which appears to hold some other kind of object. But the way you interact with all of these things is all very procedural.

So, how can you better leverage OOP?

The biggest change I would suggest is to avoid big long series of attribute accesses. Things like self.game.player.logbook[p.name].is_explored represent at best a misuse of OOP. What does this code try to do? It tries to answer if a player has explored a planet. How does it do so? By asking if the planet's name appears in the player's logbook, and if the resulting object has the right attribute set.

So how should this question look in code? It should mention as few of the other objects as possible. Ideally it would look like one of the following lines; choose one and stick with it:

Now, you might have to get your local planet or player variable from some other collection, but you don't want to have to know it's tracked in the game's player's logbook, indexed by planet's name, and stored in an an attribute called is_explored. Only the tiny function that answers that question should have to know any of that extra stuff, and then if you ever move the information, only that one function has to be updated.

Once you've chosen the new way to ask if a planet has been discovered and explored, update your code to use it. Then look for repetition, or otherwise unnecessary checks. They're distracting to read, and possibly slow your code down. For example, you currently create a list planets_to_blit that includes only planets that have been discovered. Then you iterate over this list to draw halos, but first check again whether the planet was discovered.

If you break the function into multiple pieces (say one helper that retrieves the planets, and another that draws halos), it's hard to know whether the check was performed before calling the second helper. However, instead of repeating the check as an if, consider adding it as an assert in the halo drawing helper. This documents to the reader of the code that the helper should only receive planets that have been discovered, and the resulting exception helps you to find callers that didn't make sure.

There are other small or cosmetic changes I would suggest:

Now I want to circle back to your question about side effects. Once you've split up your code into smaller helper methods, a good split will often have some of the following properties for each method:

If we look at your original code, the view_solarsys function violates all of these to some degree. It would be a lot nicer if it looked more like this:

Is that perfect? Of course not. But I think it helps.

Not the answer you're looking for? Browse other questions tagged python object-oriented python-2.x graphics pygame or ask your own question.