I wrote a Priority Queue that is stored using a doubly linked list. The queue can return the head and tail of the list, and contains a print function that is only used for testing purposes.

I'd like a critique of the general style, correctness, efficiency, exception handling, algorithm and any other areas I may have missed.I've also added the tests I used for the code as well.

Here is my test code:

And here is the output, which is correct for the inputs 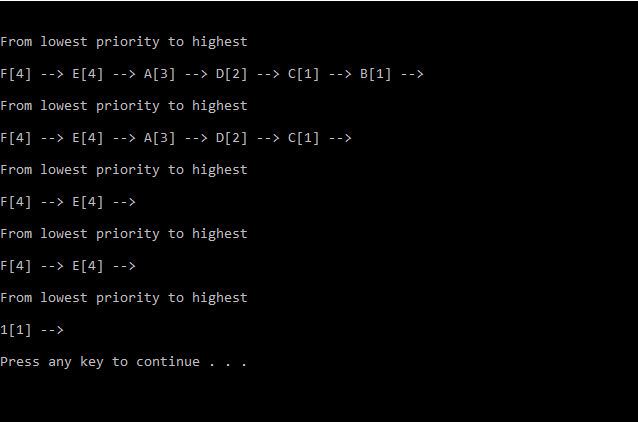 I wrote a Priority Queue that is stored using a doubly linked list.

I'm tempted to start and stop with this single point. A priority queue stored as a linked list is just a bad idea. There's virtually nothing you can do from that point onward to even have a hope of repairing that.

If you're set on putting a linked list to use, I'd at least break it up into one linked list per priority level, with (for example) the heads/tails of the linked lists stored in an array/vector. Then you can index to the correct linked list and add to the end (or remove from the beginning) quickly.

With a single linked list, you're stuck traversing through all the items at higher (or lower, depending on which direction you go) to find the location for an insertion/removal. This is bad because:

Let's consider those last twos point in a little more detail by considering your example code. In your example, the actual data to be stored in a node is one char. Along with that, however, you're storing two shared pointers and one int.

At least to me, that just seems at least a bit excessive.

Anyway, I hope I haven't bored you too much, but I think that basic point really deserved some emphasis.

It's not clear to me why you chose the name swapPriorityQueue. Normally this would just be named swap. Using that name allows anything else that wants to swap items to make use of it. This is especially important for generic code.

Similarly, what you've named first and last are normally named front and back. Oh, it's also strange (to the point of being actively misleading) that first returns the tail of the list and last returns the head of the list. I think most people would expect rather the opposite of that.

Since your swapPriorityQueue only uses a public function (swap) it doesn't really need to be a friend. In this case, all the friend is accomplishing is making it a non-member function.

The few studies I've seen that looked at this sort of formatting found it to be a net negative in terms of maintenance. Maintaining this spacing throughout the code takes quite a bit of work, and there's little gain in readability to pay for that work (and it shows here--you haven't used that formatting consistently, and in a few places, a noexcept isn't visible at all, at least as I'm seeing the code online).

Not the answer you're looking for? Browse other questions tagged c++ c++11 priority-queue or ask your own question.