I was wondering if this is the best possible design for my situation. Note that this is a simpler version of the problem I am trying to tackle.

I have a class Stage that holds data as two vectors: weights w_ and values x_. I'm interested in calculating certain statistics like the weighted mean / variance etc. So I have a method Stage::ReportStatistic.

The Statistic class is abstract and goes as a pointer argument to Stage::ReportStatistic. The Statistic class has a method Statistic::Value that takes two vectors and calculates the statistic in any particular implementation, such as my StatisticMean::Value.

The code is complete and can be compiled using something like g++ -std=c++11 <whatever>.cpp.

A more realistic version of this problem: 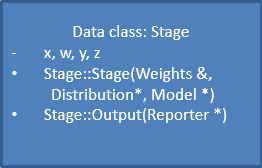 Roughly speaking, this class takes probability distribution, samples from it, and then transforms each sample according to some model function. Once the object is constructed in this way, I'd like to report statistics on the transformed samples (say x here).

Anything pointers going into the methods of Stage would need to access the private members of Stage through something like references. If I change the representation of private data in Stage, it would force me to rewrite even the headers of Model and Reporter.

The pros of this design is that I can write thousands of Model and Reporter children according to what I want by simple inheritance. And it would work just fine unless, somewhere down the line, I needed to change how the data is represented in Stage. I'd like to avoid this problem.

It doesn't seem to me that what you've invented adds enough new to that to justify itself.

If I were going to write something different from that, I'd probably start from the data. I think the idea of having a vector of pairs is a reasonable enough one that it's worth at least considering what code using that could look like. I'd think of something like this:

The usual hope with an inheritance-based hierarchy is that it allows substantially improved flexibility and/or ease of implementation, at the expense of only minimal run-time overhead.

In this case, you seem to have achieved the minimal run-time overhead (only one virtual call per entire pair of arrays), but I don't see where you've accomplished much (if anything) in the way of adding flexibility or made implementation any easier at all (rather the opposite: you've actually added some overhead to implementation as well).

At least as I see it, the problem here is fairly simple: inheritance almost always adds a little bit of overhead:

In this case, the sum total of "knowledge" embodied in the base class is "we doing something with a couple of arrays". That doesn't impart enough useful information to the derived class that it simplifies implementation enough to make up for the normal overhead of using derivation to start with, so it ends up as a net loss. Worse, although we probably could embody a little more into the base class, I'm pretty sure even when we move as much there as we can, it still ends up a net loss.

Not the answer you're looking for? Browse other questions tagged c++ object-oriented c++11 statistics or ask your own question.