Transferring data for a given month from one sheet to another

I have dollar amounts sorted by month that I want to transfer from sheet entry to sheet actuals. I only want to do it for a specified month prompted from user. Each dollar amount has a corresponding cost center/ID and description in separate columns. I want to copy the amounts and description from entry to the row in actuals matching the same ID.

Sometimes, multiple amounts share the same ID so I need to place them one below the other.

So we're getting the month name for some user input - if that's always going to be in English, then there's no need to hard-code that in a Select Case block.

So, now we have the month name (or an empty string), that month procedure can actually start focusing on its task.

It's confusing that every code paths execute the died: label. There's no error handling - seeing that line label I was expecting to see On Error GoTo died somewhere.

So two things are happening here. First we're iterating dataWS and populating three arrays in parallel - there's a design smell right here: you have 3 data structures that are "in sync", when there should really be only one.

Make a small class module, and expose the 3 properties you're interested in:

Now you can store instances of this class, which encapsulates the data you're interested in. This:

And now if the body of that loop was extracted into its own function...

You could also define an Enum to get rid of the magic values there:

And then use them to enhance readability here:

And now if you ever need to read more values, that code doesn't even need to change - you can simply modify the DataModel accordingly, and the function that reads a row's values into an instance. And this loop and collection should go into its own function, too.

The number of items in the collection would be simply data.Count.

Next the loop that consumes this data, could be a For Each loop:

Again, this should be in its own procedure. On Error Resume Next shouldn't need to be there. What errors are being thrown under the carpet? They should be handled.

If that's not already at the top of your module, go put it there, then get it to insert automatically by going to Tools --> Options --> Require Variable Declaration. By forcing you to declare all your variables, this will prevent a ton of bugs by catching, among other things, typos and incompatible data types.

You can give a sheet a codename by going to the Properties window in the VBE, selecting your worksheet and setting the (name) property. A codename is, effectively, a globally-scoped variable that refers to the worksheet. So, if you gave your "Actuals by Month" sheet the codename actualsSheet, rather than doing this:

You can simply go:

And now, if the user changes the name of your worksheet, the first set of code will fail, but the second set will keep carrying on as normal.

MsgBox ("If macro dies, it's likely a missing cost center.") 'warning for user

I appreciate the intent, I really do, but this is terrible for 2 reasons.

Reason #1: It Destroys any confidence the user has in your code.

If I'm a user and I see that, I think "Why the hell has this guy left a known bug in the application!", then "Wait, probably!? what else is going to go wrong here".

Reason #2: If there's a known bug then you should fix it.

This is inexcusable. If there's a known bug in your code then you fix it. And if you can't fix it, then you leave detailed instructions on how to avoid it, and how to fix it. And rather than giving the user a warning every time they run your program, you just set up error handling to tell them, if it occurs, what happened. Even better, set up error handling to complete the program anyway, then tell the user that you did X and Y but couldn't do Z because the cost center was missing.

Naming is one of the most important aspects of programming.

Quick question: How useful is your code?

You might think "Well, it probably depends on the problem it solves". But that's not what's useful. What's useful is code that other people can understand. And that includes future you. Your code could literally cure cancer, but if nobody can understand it, then nobody can use it.

So, your code should be written in a way that makes it easy for a complete stranger to figure out what it's doing and why.

The most effective way of doing this is proper, descriptive, unambiguous, concise, naming. I highly recommend the Excellent, Classic article on Naming by Joel Spolsky (In fact I recommend reading the entire blog, but start there).

Consider actualsWS. Now, this is sorta-useful. It quite clearly corresponds to "Actuals by Month" sheet. But, we don't really care what it's called in the code. What we care is that it is where we're copying our information.

Which is clearer about what's going on?

How about answer? Again, kinda-useful. It sorta implies there's a question somewhere, but what question? what answer? Very ambiguous. userInputMonthIndex is a little longer, but is so much clearer. I can see that variable anywhere later on in the code and know exactly what it is. Screen real-estate is cheap and plentiful. Cognitive processing is not. Optimise for ease of comprehension.

And then month. Is that a month number? or maybe a month name? or maybe some other month-object? You might consider just lugging your monthIndex around the code and calling MonthName( monthIndex ) whenever you need the name. If not, then give it a clear name. Something like inputMonthName (monthName would be better but it's already the name of a Function, so it would conflict).

As a user, I've always been annoyed with an app that does not allow me to cancel an action or back out of the app gracefully. As a developer, I've always felt the responsibility to present these options to the user -- it makes them feel all warm and fuzzy and believe that my app has a "polish" and quality to it. So I've built up a set of quick-use input forms I can adapt to the situation.

Your situation above where you ask the user for a starting month is a case in point. I'd rather see an input box with an "OK" and a "Cancel" button, where if the user changes his mind (or doesn't know the answer) can gracefully back out. Excel's standard InputBox does not provide this flexibility.

The userform here gives the user exactly that option, with very little code to implement it. 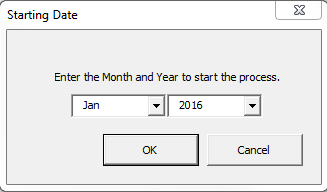 It's very easy to use, as in this test sub:

Not the answer you're looking for? Browse other questions tagged datetime vba excel or ask your own question.