I have to make a program which creates a number of threads that are waiting at the beginning, then the main process creates a doubly linked list where random numbers are put and then a signal tells the threads that a number has been put in the list, then the threads should "process" these numbers (is simply calculate the sum from 0 to the given number), graphically it looks like this: 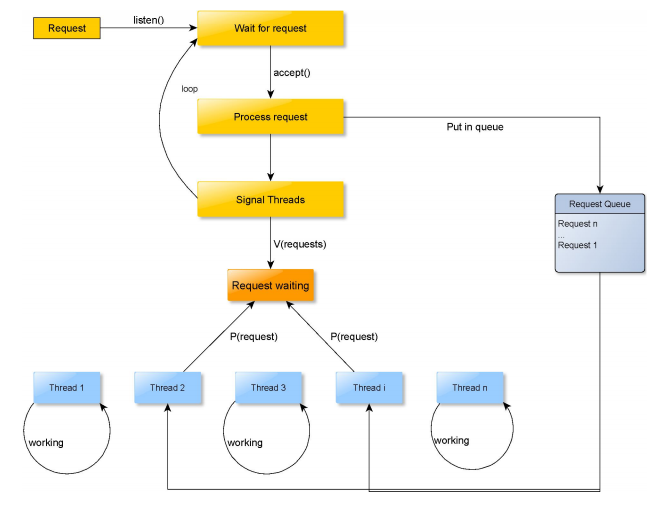 And here is the code, I wonder if I'm doing what I'm doing fine...

Note: I'm working with 4 threads and the sleep(1) was to see the output...

Apparently it's working well, it doesn't generate any errors and the outputs are the expected ones, but I would like to hear more opinions, because I am new in this, perhaps I'm making some mistakes without realizing...

It's hard to tell without seeing the code for InsertHead and PopTail, but I would not be surprised if you've got a race condition between the main thread's InsertHead and the worker thread's PopTail. The workers take mutex in order to prevent data races among themselves; but the main thread blithely pushes new data onto the list without taking mutex, which seems like it would cause a race in the case that the list had only one element.

to save those heap allocations (which, by the way, you never free).

The variable i should be declared within the for loop:

and the variable number should be declared where it's used:

This is fine (and 100% correct, because it avoids implementation-defined casts!), but you should know that in practice most codebases will do simply

The latter is technically implementation-defined, but on common platforms it works, and it works without any memory loads or stores, which is nice, so that's why people end up doing it.

You fail to check the return value of pthread_create, which is a pretty big deal in real code; it's easy for a process to run out of threads. See man pthread_create.

In English, accumulator has two cs.

Not the answer you're looking for? Browse other questions tagged c pthreads or ask your own question.