Write a multithreaded C++ application (executable) for Windows Platform. This program uses the two threads to read and process the input data and store it into an output file. Candidate is free to make it console or UI based Windows application. Detailed description

This is primarily about the high-level design of the code rather than the details.

This means the lock for that buffer is almost certain to be under heavy contention at nearly all times--the producer and the consumer are both trying to use the buffer almost constantly.

To fix that, I'd have the producer and the consumer use separate buffers. For example, you can create a small pool of buffers. The producer (the reader) gets a buffer from the pool, fills it, and puts that buffer into a queue.

The consumer (the parser) gets a buffer from the queue, parses it, and then releases the buffer back to the buffer pool.

From a code viewpoint, we can even merge those two pretty easily. Our buffer allocator can be implemented as a queue of free buffers, so we just have two instances of a queue of buffer: one going from the reader to the parser, and the other going back from the parser to the reader: 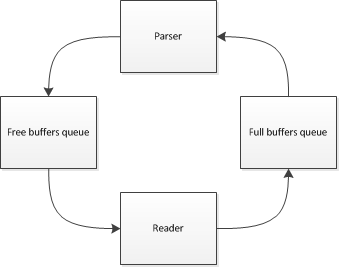 This way, our locks are relatively low-contention. For example, if we use 4K buffers, the worst-case is contending over a lock once every 4K characters we process. Since lock contention is inversely proportional to buffer size, it's trivial to adjust the buffer size to reduce lock contention to/below whatever level we decide we need.

This also simplifies both the reader and the parser quite a bit, because neither of them needs to deal with locks at all any more--the only locking that's needed is handled in the queues, doing a synchronized push or pop.

This also makes it pretty easy to ensure against anything like a deadlock. Since the only thing we do under a lock is push/pop an item into/off of a queue, it becomes trivial to ensure that once we obtain a lock, we do the push/pop and release the lock again, all entirely deterministically.

As it stands right now, your parser fails for a slightly unusual (but entirely legitimate) corner case. The most obvious example would be a tag that contains some code. In a case like this it's fairly common for the code in the tag to be only a function call, like this:

Although that's common, it's not restricted to a single function call. It can be other code, such as something like this:

In this case, the > in the code will be parsed as the end of the tag, so b) then..." will all be seen as normal text instead of an attribute inside the tag.

Does the assignment specifically mandate the explicit use of Windows threading APIs or should the code simply compile and run under Windows? In the case of the latter, the C++ standard library now provides cross-platform threading APIs which can be easier to use.

Regarding your choice of C++: you start out by showing us a class, but it is filled mostly with static methods/variables. This is not the way a class should be designed. You've probably written it this way because of the callback that needs to be passed into CreateThread. As CreateThread also accepts a payload, you can simply pass it a method/lambda that just casts the payload pointer into this and calls an instance method on the specific instance.

Another design issue is that you create a class for the Reader, but then fill the main function with logic on how to perform the parsing. If you create classes, the main function's job would simply be to create an instance for each, tell them to start doing their jobs and wait for them to finish.

Why are you using C++ streams in one place, but FILE* and fopen in another?

Finally, getting to the threading part. I noticed a Sleep being performed why holding a critical section. This isn't recommended. The Windows API provides events which can be used to do a much better job of signalling another thread that "it's your turn to work".

Which might seem longer, but much less error prone.

Also, would this leak?

Use std::thread and C++11 multithreading resources instead of Windows system calls. Also you can use C++11 regular expression to do that replacement job.

Not the answer you're looking for? Browse other questions tagged c++ multithreading or ask your own question.