A friend asked me to write a pen-and-paper dice roller, so I put this together. I'm still pretty new to Java Swing, so I was hoping I could have some advice on how I handled the layouts and everything, and also just that everything is clean and efficient. He wanted to be able to type the dice roll in DnD format (ex. 4d20), so I parse that out and make sure everything's valid. I also wanted to throw in some nice shortcuts where you can just hit enter to roll, or if you want both parties to have the same roll you can just put it in the opposing party field. You can also switch between War and Party mode, where in war mode the totals also detract from the army's size. 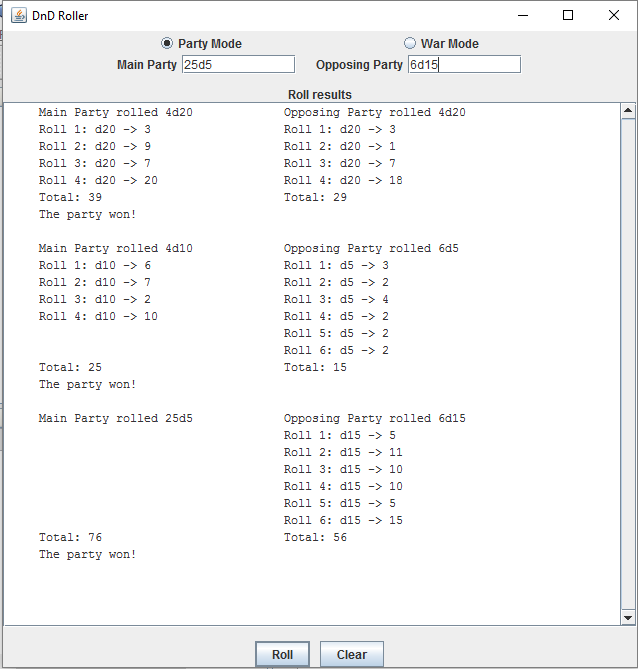 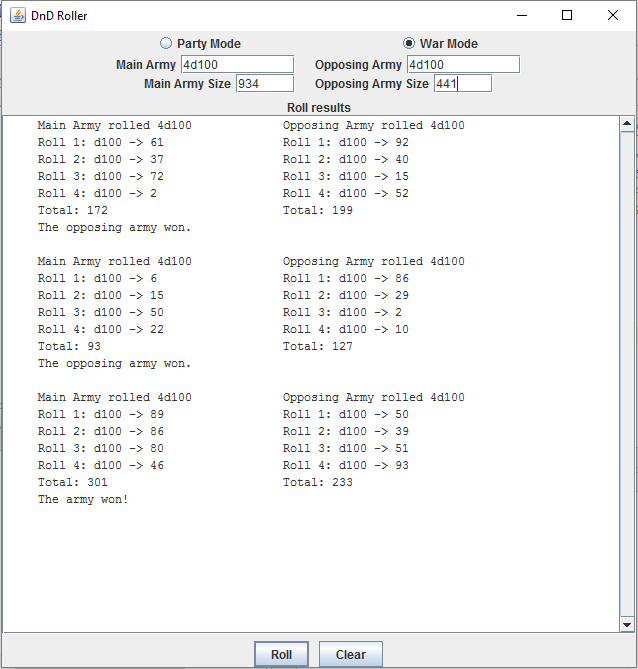 I'll be going through this from top down. This means I won't do an overall design critique. From a quick skim this would be a good idea, though. I do hope someone else does that.

Anyways </meta>, and into the review:

Your main-method is clean and simple, I'd personally rewrite it a little though. I prefer to include the JFrame into my customized UI classes to provide better encapsulation and cohesion of things related to one component.

This allows you to keep the JFrame setup separate from main and gets it into RollerPane (which I renamed to RollerView, because it's not a Pane there). When you want to change the minimumSize you'll look in the class you have there and don't have to go all over the codebase to find all JFrames where it's added to the ContentPane, and change those.

Favor composition over inheritance. It allows you to easier change how things work internally. This plays even better when you pull the JFrame into RollerView, because the JPanel is actually something you won't need a reference to after setting it up.

Instead of an array (which is "magic") it would've IMO been better to just go with:

I find this to be significantly clearer in accessing than: rollFields[MAIN_GROUP] or warFields[OPPOSING_GROUP].
Same applies to groupLabels btw.

In addition to that it's usually considered bad practice to declare multiple variables or fields on one line, see (MAIN_GROUP, OPPOSING_GROUP, warMode, partyMode, ...)

I like how you set up your components in your constructor. I especially like how you've been grouping component setup code by component. I don't like that it's all typed out in the constructor. You're intermingling abstraction levels in a way.

Creating a component and adding it to your content pane are two different levels of abstraction. I strongly suggest extracting the component creation into properly named methods to cut down the number of lines in your constructor.
Additionally you can abuse the fact that those components never will change over the lifetime of your panel (or roller). You should declare the fields as final where possible. This is especially helpful after "pulling apart" the arrays, since a final array is still mutable, wrt. it's content. This doesn't happen when you pull the array apart into separate fields.
Let me demonstrate what I mean:

Immutability generally is considered a good thing, since it allows you to reduce mental strain when reading code (stuff doesn't change) and it allows for some Compiler optimizations (both for javac and the JIT compiler), which can improve overall performance.

For now that's it about the GUI. I've got a small point to make about your Roller, though...

You should also handle dice rolls like "5+3d20" correctly. As of now that's not the case, though...

Not the answer you're looking for? Browse other questions tagged java game parsing gui dice or ask your own question.