Starting point I kind-of inherited a VBA project at work that consists of a bunch of Word document templates that provide users with the tools they need to create documents according to company guidelines and to help them give all documents the same appearance. We use different templates for the documents that we create, and each of these uses a different subset of tools from the collection. I was faced with the problem of having to maintain multiple copies of the same code in as many different templates.

Current Solution The solution I came up with was to group associated code fragments into separate modules where each serves a well-defined purpose, to export these modules to external files and to build a preloading process that is triggered from AutoNew() and AutoOpen(). One advantage of this is that I can change the code in these modules without having to wait for write access to the templates that need them.

Failed Ideas What I tried but failed at is to move the code to another template and to link that to the document template via the VBE in an attempt at faking some kind of inheritance. This approach consistently led to crashes of the macro system as well as (occasionally) Word itself. What's more, the error codes that Word decided to spew at me were entirely unhelpful, which is the main reason why I threw all of this in the bin - I didn't feel equipped to even start debugging it.

What's probably not going to work What I would like to avoid, though, is to write a Word AddIn or using VSTO because we do not have any meaningful way of deploying new versions of the code to the users' workstations, and I'd hate the prospect of having to tamper with their machines every time I fix something. For my personal convenience, I'd pretty much prefer if everything could just sit in our group's template directory on our central network share.

Well, here's the monstrosity I created and that I'd like your opinion on:

However, because this also requires every workstation to allow all access to the VBA object model, I feel like this approach poses an inherent security risk, and I would very much like to avoid it but can't.

Thank you very much for taking the time to read all this, and for any input you may have.

I have two tiny things right now. The variable count is a system reserved name for something else, so I would avoid naming the variable that way. countComponents might be good.

This logic can be simplified by editing the ModuleExists function to return the opposite.

That would just increase the intuitive logic. Alternatively you could just use

But that is also using a False basis when a True is always more intuitive with if.

Speaking of checking for the module, you could simplify all that nesting by using the module objects as the loop.

Oh, one more thing on that integer - integers are obsolete. According to msdn VBA silently converts all integers to long.

Thanks for using Rubberduck! As @Vogel612 mentioned, the parser error you're getting is a known issue in the v1.4.3 release. In short:

Accessing a subscript immediately after a function call isn't supported. An easy work-around is to introduce a local variable to hold the collection/array result:

Note that your entire code parses perfectly fine as-is with the current 2.0 build, which we're going to pre-release in a couple of weeks days.

The sad part is that, since Rubberduck couldn't parse your project, you couldn't benefit from the code inspections.. Not that there's a ton of results, but here's what 2.0 says:

Module members are public by default, which can be counter-intuitive. Consider specifying explicit access modifiers to avoid ambiguity.

Parameter is passed by value, but is assigned a new value/reference. Consider making a local copy instead if the caller isn't supposed to know the new value. If the caller should see the new value, the parameter should be passed ByRef instead, and you have a bug.

There are other results, but they're probably not relevant to your actual project (I just pasted your code into a new module, in Excel VBA) - Watch out for Option Explicit not being specified though. 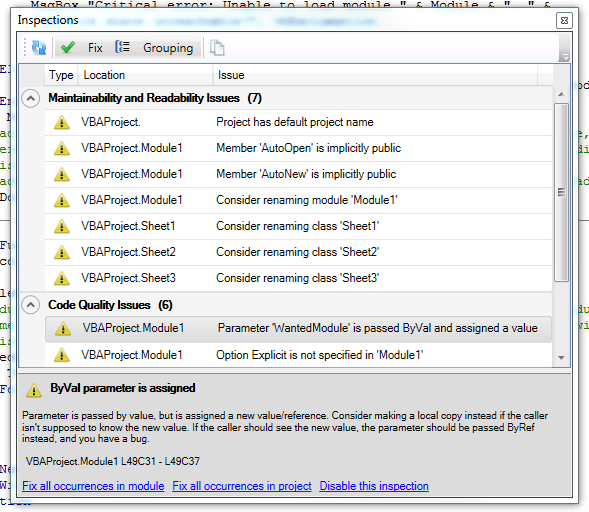 Your indentation is well done and consistent, but you'll have to configure Rubberduck 2.0 indenter settings to make 2-space indent happen - default being 4 spaces.

If K: is a network drive, know that it could be mapped (or re-mapped) to any other letter on other machines - it's probably a better idea to use the UNC path, like:

That way the path is accessible if you're on the network, regardless of whether your network drives are connected or not.

As the module names are identical to their file names

It's usually the case. However a module's actual name isn't determined by its filename, but by the value of a specific dedicated attribute in the file header (the VBE hides class headers and Attribute meta-instructions):

In the unlikely event where someone would modify that attribute in, say, Notepad, your code would fail to identify an existing module, re-import a set of existing functions and procedures, and then the code wouldn't compile anymore because of duplicate definitions.

I don't have much to add, other than I noticed a complete lack of error handling. I'm going to guess that this template won't work correctly if the modules aren't loaded correctly. You should take some time to identify possible failure points and handle possible runtime errors by notifying the user that there was an issue loading required files, logging relevant info off someplace, and then shutting down the template.

Not the answer you're looking for? Browse other questions tagged vba ms-word or ask your own question.