Maybe a somewhat odd choice of language, but here is a program in ><> I have tried to optimize the execution time of. (Not golfing). The efficiency is measured in the number of required instructions on an ideal ><>-machine, which uses the same amount of time to execute each instruction.

The program does a complete factorization of a number on the stack, and prints the result. The method used is trial division of odd numbers, up to the square root of the original number. The 2-factors are calculated first. The core of this program is the third line, which wraps around, and has a minimum of 2D-program flow commands. (I have also not used p, so the source code is static, and does not modify itself.)

An online interpreter for ><> is available here.

Here is a commented version:

The program outputs the numbers directly, so for testing purposes, it may be convenient to separate them with commas:

The main loop in detail:

The stack starts off with n,n,i ,where n is the number we are trying to factorize, and i is the iterator.

I would like to know if there are optimization opportunities I have missed, and if the code is fairly readable by ><> standards. Again, this is not about golfing or obfuscating the code.

If you are testing the code with the online interpretor, there is an easy way to put a number in the initial stack (Otherwise, you get the standard ><>-error "Something smells fishy..."). 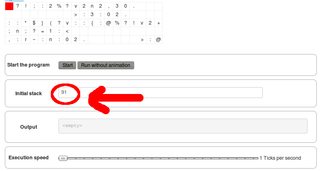 First off, I'd like to say that you're asking two questions which are at odds with each other. Having readable ><> code usually requires a decent amount of whitespace, but minimising the number of ticks requires reducing the amount of whitespace and a bit of golfing. I'll assume that you're primarily aiming for the latter, while keeping the code as readable as possible under this constraint.

A minor one about your explanation - ( is second < top, so by having n, s at the top of the stack you're checking whether square > n, not square >= n. If it were the latter, your code would fail for numbers like 9! (no factorial)

Just a note of warning: both the online interpreter and the official Python interpreter use floats for division, so this program would most likely fail for large numbers. Unfortunately, I don't know of any good way to perform integer division as efficiently.

Wrapping the last line doesn't affect efficiency, so it's more readable to have the , follow the @. Also, if we wanted to save every tick, we could have this part on the second-last line instead:

Note that I've also flipped the :1=?;n; for readability since it fits going left-to-right.

Speaking of :1=?;n;, this reads as "halt immediately if the number is 1, else print the number then halt". This could be more clearly expressed as

to "print the number if it's not 1, then halt". Alternatively, you can use -? as an idiom for "if not equals", and do

to save a tick.

It's a bit more logical to separate the initial zero check from the rest of the first line, which divides out factors of 2. This is also a bit more efficient, since we save on the 30. jump.

Instead, you can do

Putting all of the above notes together, we get the slightly more efficient version:

This only concerns your testing code, but outputting single characters should be done with quotes for readability, i.e. ','o rather than 4b*o to output a comma.

In terms of general ><> readability, I wouldn't call this particularly readable, but under the constraint of efficiency it's pretty good. However, if the goal were strictly readability, here are a few comments:

Extra: using l as a counter

For extra efficiency and sheer stupidity, we can use l (which pushes the length of the stack) as a counter to save on stack manipulation. Granted, this would run into memory problems for large numbers and is terrible for readability, but I'm sure that's the least of our worries if we're factorising in ><>!

Not the answer you're looking for? Browse other questions tagged performance primes fish-lang or ask your own question.