I'm currently learning Swift by following the Stanford developing iOS app 2015 lecture series. I have completed assignment 1 but am wondering if there is any improvement can be made to my code.

Also, I have not been able to complete extra credit no. 4, so I would appreciate if someone could offer me a hint. 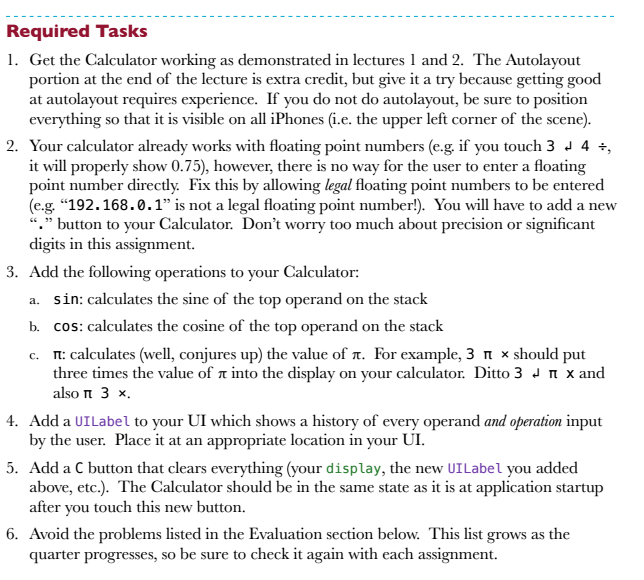 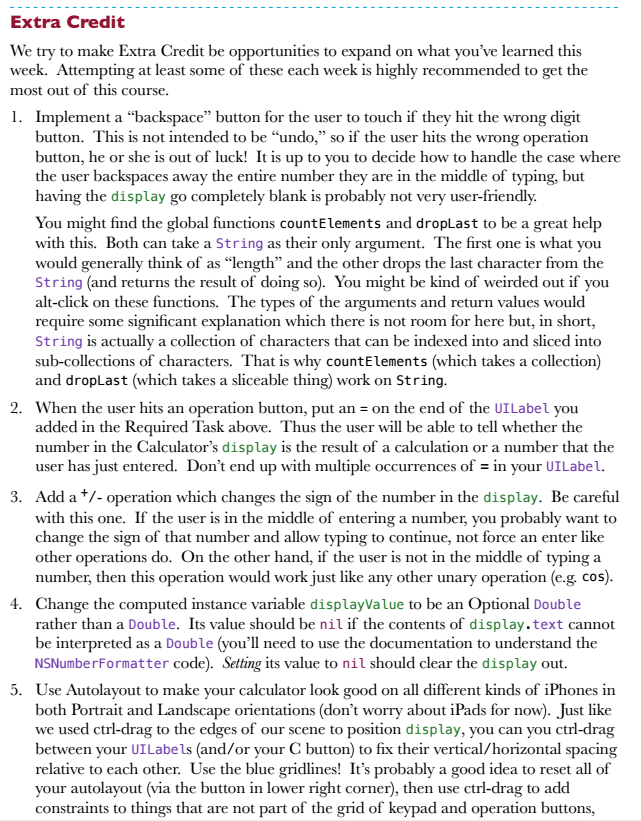 I have never seen the Stanford class or this example before, so I might be mentioning stuff that hasn't been covered yet in the class...

Much like viewDidLoad() and family, @IBActions are for telling your class that something has happened, not for telling it to do things. As such, you should name such functions to remind yourself of this fact. Also, that's why you don't call them directly in code.

For example, your appendDigit function doesn't actually append a digit. Sometimes it ignores the value (if the "digit" is "." and the text already has a dot in it,) and sometimes it wipes out the text and replaces it with the digit. This method exists to let your class know that one of the number keys was tapped, so a better name would be something like @IBAction func tappedNumberButton(sender: UIButton)

All your code is in the view controller, there is no Model:

You are writing a calculator app, but there isn't any expressed concept of a Calculator in your code. I would expect to see some sort of calculator class that deals with numbers and manipulating them. Something that exists independent of the view controller and could be used as a component in other apps that need to handle calculation.

Having a separate Calculator class would also make your code amiable to automated tests.

You seem to have two distinct states in your system as evidenced by your userIsInTheMiddleOfTyping variable. It would be interesting if you actually expressed that in two different classes, but that might be overkill for this particular project.

Your indentation seems consistent, but your use of carnage return isn't. Sometimes you use two CRs.

Not the answer you're looking for? Browse other questions tagged ios calculator swift or ask your own question.